She Quit Her Job on the Spot. Was She Wrong?

Do you think it’s wrong to quit a job on the spot?

Well, I guess it depends on the case…but you know when someone DOES quit that way, you know there are gonna be some hurt feelings.

Take a look at this story and see if you think this young woman was wrong for how she did it.

“So, I (19F) worked 2 jobs until last Sunday. My second job I was making a crap ton of money at as a waitress, and was getting plenty of hours to complete the internship requirement at my school.

However, at my first job working to-gos, I was barely averaging 4 hours at one day a week, and while I made $12/hour, I only made around $15 in tips- barely enough to pay for my therapy. I had tried to get more hours, and work more days a week, but they refused to schedule me, so I was forced to get a second job.

I had planned on quitting with two weeks, and being professional. Then Mother’s Day happened. I was scheduled from 4pm-8pm, and my mother was having her dinner at 7pm at her favorite restaurant. I was supposed to get off work and drive 30 minutes to the restaurant, and had made it clear to both managers working my shift that I had a prior engagement scheduled after my shift and needed to be cut on time.

I work my shift, and 8pm rolls around, and a flood of orders roll in, and I think “Okay, get these done, and I’ll get to leave.” I get them done in 30 minutes, and then start stocking up. My manager tells me she’s going to try and get me out in the next 15 minutes. Then immediately changes her mind. I pull out my phone to tell my mother, and she insists I put it away, or she’ll take it.

It’s been an hour, my phone is going nuts, and we have been getting orders intermittently every 20 minutes or so, but always 2 or 3. I resort to going to the restroom to tell my mom I’m not off yet. She tells me they’ve already paid they check and couldn’t wait any longer, but they’ll come get me so I don’t have to walk.

It’s been an hour and a half since I was scheduled to be off. My parents pull up, and by this point, I’m pi**ed. My manager has given no clue as to when I’ll be able to leave, and is telling me to “Get over whatever is wrong because the customers can tell.” (No they can’t; they’re DoorDashers anyways.) So I tell her I quit and not to schedule me again, and that I don’t have the time or energy to work a job that doesn’t respect me or my commitments.

Later, the other manager texts me and says I was unprofessional, and that I won’t last long in the food industry if I’m not willing to work. She said (not in so many words) that what I did was an AH move, and it’s been eating me inside.

One reader said this young woman is NTA and that they are gaslighting her. 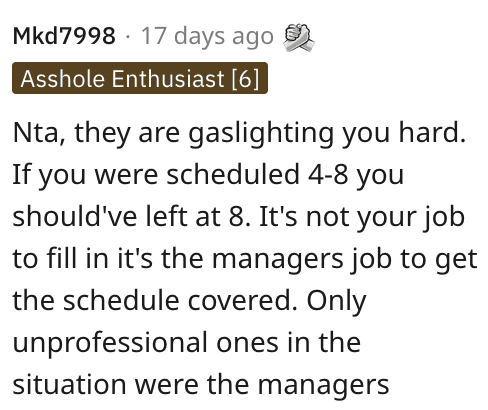 Another person said that the managers knew they were screwing her over. 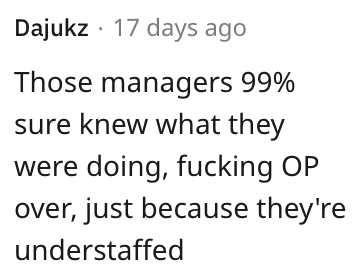 And this individual talked about what they would have done in they’d been in her situation. 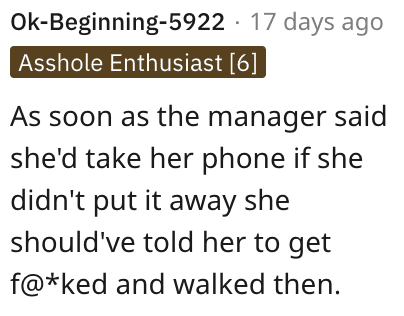