She Put a Lock on Her Freezer to Keep Neighborhood Kids Away. Did She Go Too Far?

When I was in high school, kids in my neighborhood were constantly walking around looking for open garages with refrigerators so they could hopefully steal some beer.

It was a nightly ritual that, looking back on it, was kind of stupid because who knows what could have gone wrong…

Prowling into a stranger’s garage at night? Good idea!

Read this story and see if you think this woman was wrong to put a lock on her freezer to keep neighborhood kids from stealing her stuff.

“I 25f live in a small neighborhood where we all get along with each other rather well me and my neighbors often tend to have little cookouts or gatherings in our yards to celebrate various holidays or just to let the kids hang out in general, however with summer heat we haven’t done many hangouts like this it’s usually just the kids playing outside now.

I tend to get worried that they’ll overheat out there so I decided to use the extra deep freezer I had and fill it with ice creams and popsicles for the kids and put it outside so that they’ll have something to cool down with I left a note on the freezer telling them it’s ok to take more than one just be mindful of others and don’t take to many this worked out great the kids listened to the note I left and some of my neighbors even pitched in to refill the freezer whenever it started getting empty all was well.

That was until a new family moved in, their kids would always take way too much sometimes even taking whole boxes of popsicles or one too many ice creams even the parents would come and snatch a few I went to their door and told them that they had to slow down because it was getting to the point where the freezer would run out too fast and the other kids would be left with none they said they understand and that they’ll tell their kids to slow down I went home after that.

Lo and behold there the parents are the next day about to take multiple boxes of ice cream I went outside and stopped them telling them to put them back they complained about it for a while but eventually put them back. I was beyond annoyed with this and I wanted to find a way to work around this situation I didn’t want to stop filling the freezer because I wasn’t about to punish all the kids for something one family did.

Instead I decided to get a clasp lock for the freezer. I called up my other neighbors and explained this to them they all agreed with me so I went and brought the lock and put it on the freezer the same day I also brought multiple keys for it and gave them to my all my neighbors except for that one family I would personally unlock it myself if their kids wanted an ice cream or popsicle. (i didn’t want to exclude their kids because I didn’t like the thought of them watching everyone else have ice cream/popsicles while not having any them selves)

I guess they must have told their parents that because a few days later I had both of them banging on my door and yelling about how I’m making them seem like thieves to the other neighbors and calling me over dramatic b**ch for locking the freezer. I simply told them that I gave them a warning but they didn’t listen so now they gotta deal with the consequences of their actions.

So Reddit am I the a**hole for putting a lock on my deep freezer?”

One person said she’s NTA and that their parents obviously didn’t teach them very well. 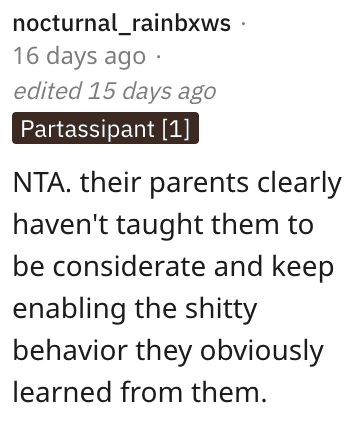 Another individual said these people had no right to access her property. 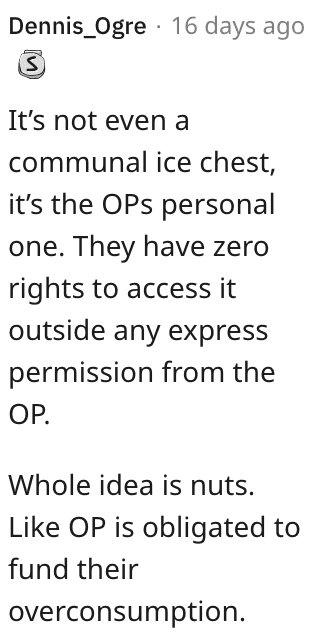