She Made Her Husband Pay for the Piano He Damaged. Was She Wrong?

You break it, you buy it!

I’m sure you’ve heard of that saying in stores before, right?

Well, this story from Reddit’s “Am I the A**hole?” page might remind you of that saying with a little bit of a twist.

Read on to see what happened and if you think this woman acted like a jerk.

“My husband & I have been together for 2 an a half years.

I have a daughter “Callie”, she’s 13, she loves instrumental music and piano has been her #1 interest. I’m not saying this because she’s my daughter but really, I see her talent as special and more importantly…she uses it to express her feelings especially for her deceased father who passed away when she was 7.

She always says that she, in a way connects to him through playing piano. So I encouraged her to do more and her grandparents bought her a 6000 thousand piano that she was so thrilled with.

The whole family encourages her but my husband thinks she’s being distracted from school, real future etc. He doesn’t attend her plays, doesn’t help with the academy, doesn’t even take the time to listen to her playing and everytime he comes home and hears her playing upstairs, he’d lecture us about how this activity is just a waste of time.

I sat him down and told him about Callie picking up on that bad vibe, he got mad and said that he was doing my job for me and ensuring she doesn’t get distracted from school although her grades are good.

We went back an forth on this and I made it clear that this should stop. He said okay and that was the end of it.

On Sunday a huge argument ensued in the house because my husband claimed Callie woke him up on his day off with her loud playing. He issued an ultimatuim, either the piano goes or he gets rid of it himself. I asked where should I take it? He said Callie’s grandparents house but Callie didn’t want to.

After we left I found out that my husband took it to the junk yard his dad works at and cut it into pieces. A big argument ensued and we literally had a screaming match infront of his family over this. I gave him 2 days to pay for a new one despite him apologizing and saying he acted in a moment of desperation and frustration.

He said the only way he could pay for it is using his savings that was supposed to go towards his new Garage as a side business. He complained about me forcing him to pay and ruining his business before it even starts.

He kept sending his family as middle-men to get me to give him at least 4 months but I refused and stood my ground despite being called unreasonable since it’s a piano vs new business.

AITA for forcing him to pay and not giving him time?”

Now it’s time to see what Reddit users think about this.

One person said it plain and simple: she needs to get out of this relationship. 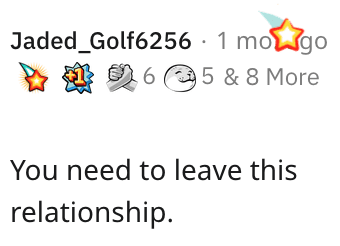 Another reader said she should at least leave him for her daughter’s sake. 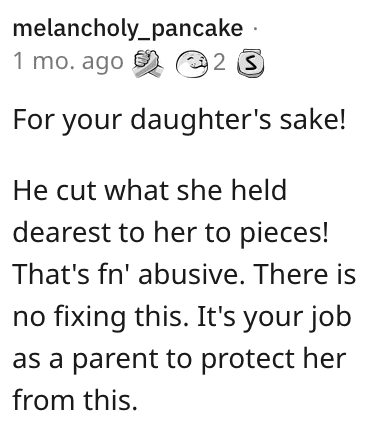 And this individual said she’s NTA and that she shouldn’t let him back after this disturbing incident. 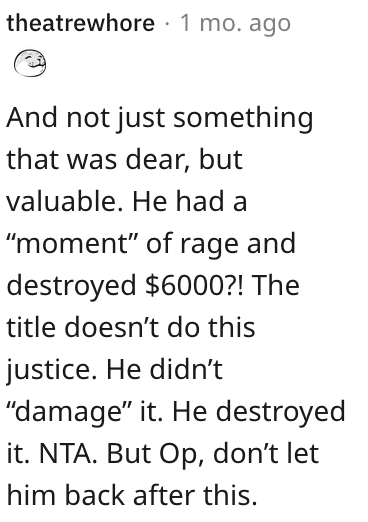