She Left Her Group Chat After Being Left Out of a Wedding. Is She Wrong?

It never feels good to be left out, especially when people you think are your friends are the ones doing it.

Check out this story and see if you think this woman was wrong for leaving a group chat after she was left out of an event.

“I, 23F, am being called petty and immature for trying to leave my friends group chat after my feelings were hurt.

I have a very large friend group that hangs out all together a couple times a year. We have a large group chat which we use regularly to share memories and photos.

As I mentioned, it’s a very large group, about 18 people. As such, obviously we aren’t all equally close. Some of the connections between people in the group is mainly mutual friends. However, we do all generally go to the same parties.

Well one of the people in this group was getting married and although we’ve known each other for a couple of years now, I’m not close friends with her. I suspected I wouldn’t get an invite to her wedding because she said it was more of a low key event and I knew she didn’t have a lot to spend on it.

When it came time to send out her invitations, I received a call from one of our mutual friends whom we are both close with. My friend wanted to tell me that the bride felt really awful about it but that she couldn’t invite me to the wedding because of limited space.

I immediately reached out to her and let her know that there were no hard feelings and that weddings were stressful enough. I did feel a little bad about not being invited but I also assumed that there were other people in our friend group receiving similar calls.

Well as it turned out, I was completely wrong. This weekend my group chat blew up with pictures from the wedding and while I was looking through them I realized that I had been the only one who didn’t receive an invite. What was worse was that everyone who had a SO has gotten a plus one; even my friend who had started dating his girlfriend AFTER I was told they couldn’t invite me.

I was so embarrassed. I’ve been very insecure about friendships the majority of my life because I’ve had multiple people “upgrade” to someone more popular than me. So I suppose because of this I got upset and decided I didn’t want to be apart of the entire group anymore and I left the group chat.

That’s when my friends started reaching out to me asking why I had left. Some of them were understanding but my best friend told me that it looks really bratty and petty. Now I’m feeling bad because I really didn’t want to put a damper on their wedding joy, but being excluded really hurt my feelings. So now I’m worrying.

This reader said she’s NTA and that she’s better off without these people.

And this individual also said she’s NTA and they shared their own story like this. 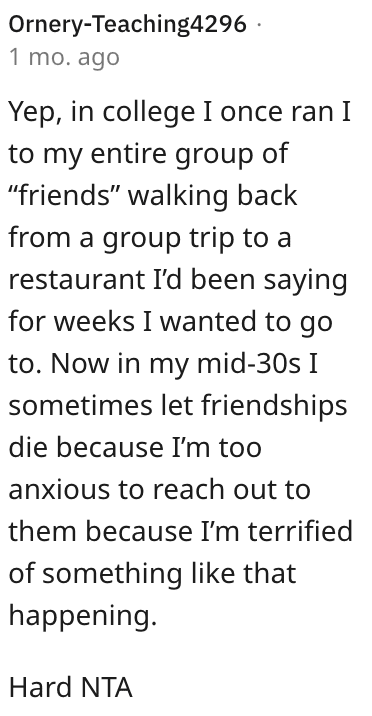 And this reader said she should take this as a hint that she needs some new friends. 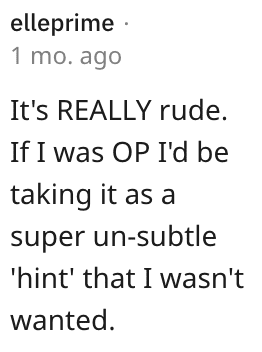