She Kicked Her Best Friend Out So Her Fiancée Could Move In. Was She Wrong?

And that’s what happened in this story from Reddit’s “Am I the A**hole?”!

Read on to get all the details!

“My (24f) best friend Kate (24f) and I have lived together since we were 20. I’m staying at a house which belongs to me after my grandma passed away and left it to me.

I didn’t ask Kate to pay me any rent and she just contributes to the house expenses such as bills etc.

I’ve been with my fiancé (24m) since we were 19. The first years of us being together he’d occasionally visit my place and I’d also go to his place. But after we got more serious he started spending more time at my place and he’d usually stay in my room and not bother Kate. Kate didn’t have a problem at first but later she said I needed her permission to bring someone over.

I respected her wishes and whenever she didn’t want him over I just went to my fiancé’s place. But then she’d make a scene even the few times he’d come over. She’d also make a scene about me leaving to go stay with him and how I’m a tourist at my own house. For the record I never stopped paying for my share of bills and expenses.

One time the electiricy and water bills were higher because my fiancé would have visited and would have used water to shower and opened the ac/heat on etc. I told Kate I’d pay more and she’d just have to pay her usual share and that she doesn’t have to pay any more money at all. But she didn’t like that and demanded my fiancé pays as well. I told her that’s not for her to decide and that’s on me and him to figure out. Back when that happened we weren’t engaged yet.

But because I knew the proposal time was near I started trying to have convos with Kate about how she should try finding her own house or go live with her parents because I plan on using this house to live with my partner and start a family here. She didn’t believe the proposal would happen soon despite & said she will look into it when the time comes. I tried to warn her countless times. But she never took me seriously.

So then my fiancé proposed. That was 4 months ago. Kate was shocked and had a mental breakdown about how she can’t live on her own and I should just give her some time. I told her that my fiancé plans to move in in 3 months and she could go stay with her parents. My fiancé moved in a month ago and Kate has made no move of finding a place or going to her parents.

My fiancé has started paying bills and all in the house but Kate picks fights with him over household stuff and arrangements all the time. I confronted her and I told her that by next week all her things will be packed and she’ll be out of my house and she doesn’t get to make the rules here and that the house belongs to me in case she forgot.

She packed a couple of clothes and left that day and for the past few days she’s sent her sister and mom to collect her stuff and they both claim I’ve been a s**tty friend to Kate and how unacceptable it is that I prioritised housing my fiancé over my childhood best friend and just kicking her out like this.

This reader said she’s NTA and that Kate overstepped her boundaries. 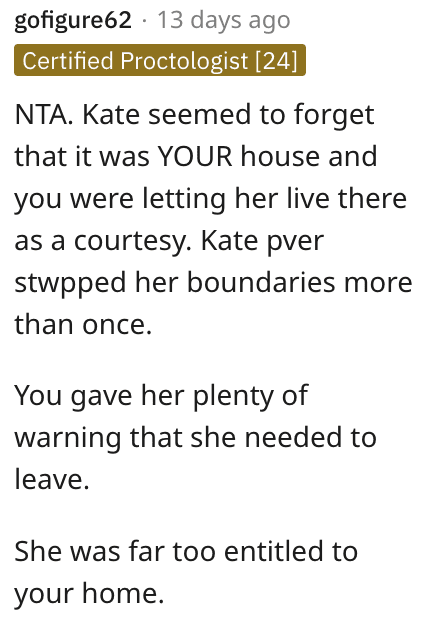 And another Reddit user brought up a good point: she gave her a 3-month warning. 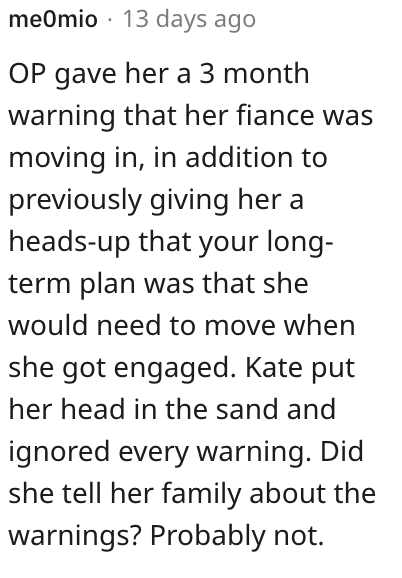 And this individual said she is definitely NTA. 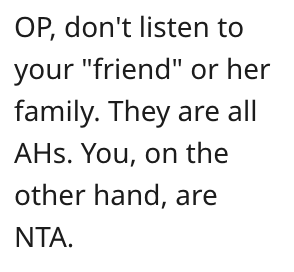