I gotta say, once I graduated from college, I never went to another “college party” ever again.

I would have just felt…weird doing that.

And that brings us to today’s story from the “Am I the A**hole?” page on Reddit.

Read on to see what happened and let us know what you think in the comments!

“I do fencing in college, I’m on a team with women and men together. We have house parties sometimes, and this year since two of my teammates and I rented a house together we became the obvious choice to be the party house and were happy to host

I’m a junior in college and my friends are a junior and a senior. We invited the whole (current) fencing team along with some friends and people’s partners.

There’s this guy Pete who is 26 and out of college for a few years but he keeps trying to come by college parties and hit on the freshman and sophomores.

As an underclassmen it always p**sed me off when the people throwing the parties would let in him and other guys who had graduated because I and the other underclassmen girls just wanted to party with people our age, not deal with creepy losers trying to get with college girls. It also p**sed me off it was played off like a joke, with freshman girls being called ‘fresh meat’

So when I started throwing parties I decided I’d do it different. My parties would be for current team members, their partners, and their college age friends. But no random guys who were clinging to their old college sports team to meet girls way too young for them. And if anyone causes trouble they’re kicked out.

So I threw a party and put in the invite text that this was a college party for the current team members, and you could bring a partner or friend. But if you wanted to invite more than one person or someone not from our school to please clear it with me first.

It was super clear in the invites that this was a college party for college students. And on the day of, I get a knock on my door and it’s this guy who has been out of college for years.

I tell him this is a college party for (redacted) State University students only, and he says he is an alumni and did fencing. I tell him I’ve been in the club for 3 years and he hasn’t been at one practice. He said he graduated the year before that. I ask him his age and he says 26. I’m getting frustrated so I yell “This is a COLLEGE party. You are 26.” And tell him to leave.

They said that these were generally open house parties and it was the norm that alumni are invited. I got irritated and said maybe alumni need to not p**s off the “fresh meat” lest the “fresh meat” grows up and tells them to f**k off.

I feel kinda conflicted because on one hand … I didn’t invite this guy or want him around. But on the other, I did pick up the tradition of hosting club parties and changed the rules just because I’m the host now.

AITA for kicking this alumni out when he tried to come to my college party?”

This reader made a good point about this guy and said the woman who wrote the post is NTA. 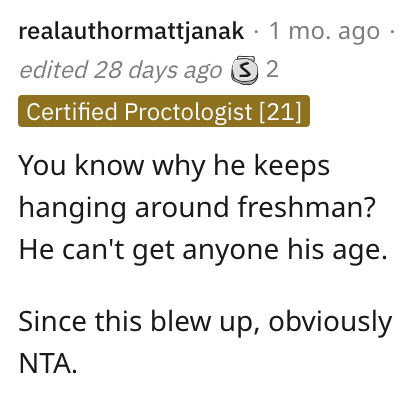 Another individual said the thought of going to a college party at this age makes her cringe. 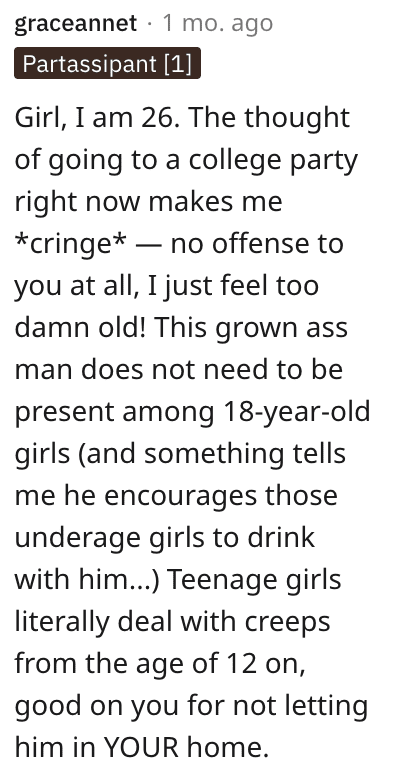 And this individual made a good point about the maturity gap between people in this age range.