She Insists on Going to Her Sister’s Wedding. Is She Wrong?

To go or not to go…that is the question…

Yes, I’m talking about the drama that sometimes arises when the issue of going to a wedding comes up…it can get ugly, folks!

Take a look at this story and see if you think this woman is out of line for wanting to go to her sister’s wedding.

I moved in with him and his kids a little while ago. I gave to say that he’s super protective of his kids, I haven’t been able to meet them til later because he said they might not like me and so he started easing them into accepting me by encouraging me and pushing me to be “extra friendly” to them by buying them stuff and cooking for them daily.

He’s very busy often times, and the boys have now clinged on to me because they see me more than they see him. Don’t get me wrong; I’m grateful for this outcome but the issue is that I can’t be away from them for a long time. More than hours. Now that I’d moved in I can’t go anywhere without taking them with me. I can barely have time for myself but what’s worse is that my work got interrupted by that. John suggested I work less hours but it didn’t happen.

Now my sister is getting married soon. It’ll be held hours away so I’ll have to travel. The invitation stated “child-free” so I can’t take the kids. When John heard about this he told me to immediately call and apologize cause I won’t be attending.

I was stunned I asked why and he went on about how much the kids adore me and how they’ll go crazy when I’m hours away from them. besides, that he’s too busy to look after them. I said it’s not my fault and he should either take time off work and stay with them or get a babysitter.

He threw a fit about how selfish and unfeeling I was and that he will only let me attend the wedding when I tell my sister to let the kids come but I can’t ask such thing of her! I INSISTED on going after he kept saying I shouldn’t go. He went and told the boys that I was looking for an excuse to get some time away from then and now they won’t even speak to me.

I confronted him about what he did and he said it’s the result of me “insisting” on going to the wedding and choosing my sister over my stepkids. He even said I should be thankful the kids “accept” me for who I am and are giving me this much attention. I was speechless and felt offended.

AITA for standing my ground and wanting to go? She’s my only sister and we have a great relationship so not attending her wedding can cause issues.”

One person said she’s NTA and that it’s clear this guy is taking advantage of her. 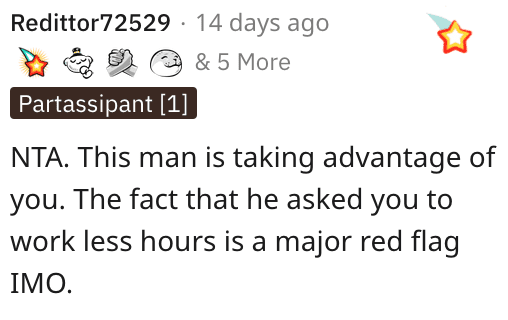 And this individual said he’s also trying to isolate her from her support network. 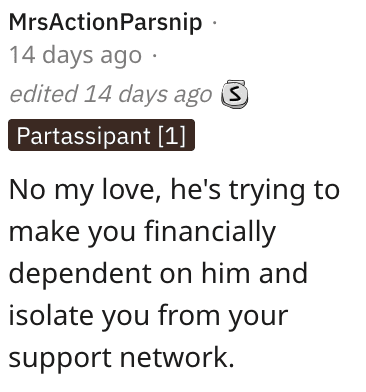 And this Reddit user said she should go to the wedding and take some time to think if she really wants to be with this guy. 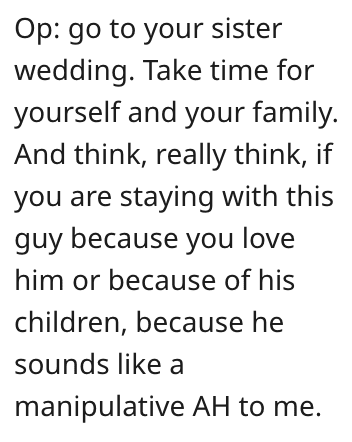