She Ignored an Autistic Person on Her Flight. Is She Wrong?

Although I’m the kind of person who tries to be polite to everyone I meet, there are sometimes when I’m on a plane that I just want to be left alone.

Maybe I’m tired, maybe it’s been a long day, or maybe I just don’t feel like making small talk with someone in a cramped metal tube flying through the sky.

Check out this story and see if you think this woman was wrong for how she treated someone on a plane ride.

I was exhausted because I only got four hours of sleep before the flight so I could sleep on the plane, but this guy (we’ll call him C) keeps trying to make conversation. C starts off by telling me he’s autistic, and then asking me if I like KPOP and he keeps non stop talking and rarely gives me a chance to speak, not that I wanted to.

I tried to be polite because I have ADHD and I understand how social cues are difficult so he probably can’t tell I’m not in the mood. Over the course of the next 20 minutes I tell C maybe 5 times I want to sleep and put my headphones on and each time C begins speaking to me after maybe 2 minutes of silence.

Finally I was able to sleep for around 4 hours, but when I woke up C started up again. I’m still really tired, and I had some personal issues the day before my flight so I’m also socially exhausted, but I let him talk for a bit before I start watching a show on my phone. I tell him maybe 5 seperate times that I’m trying to watch a show, and that I’m not interested in talking to him right now but maybe later.

C still keeps trying to talk to me, and when I snap a bit and tell him I’m getting a bit annoyed he goes into a full on self-hating ” i’m so sorry, i’m horrible god im just gonna shut up now” rant, and I feel bad because I should have been nicer to him and I can understand emotions being too strong and spiraling.

I tell C that it’s okay, and I just want some time to myself as I’m not the chattiest person, but maybe later we can talk. I put my headphones on and watched my show, but C kept trying to speak to me but this time I ignored him, which was honestly a s**tty move from me but I just didn’t have the energy at this point to interact with him. This was the wrong move, as he moved to get out of the row and stood in the aisle and began yelling at me.

I didn’t catch everything he said but it was along the lines of ” Why can’t women believe not all men are bad. Some men are on your side. I’m a nice guy, why are you ignoring me.”

He storms off to the bathroom and I take that chance to ask a flight attendant if I can change my seat because he really freaked me out and I didn’t want to have a panic attack on a plane. The flight attendants were amazing and got my stuff and moved me far away from him.

I feel like I’m TA because he does have autism and I could have been more patient maybe and ignoring him was a s**t thing to do.”

Check out what Reddit users said about what went down.

This reader said this woman is NTA and that this guy was creepy. 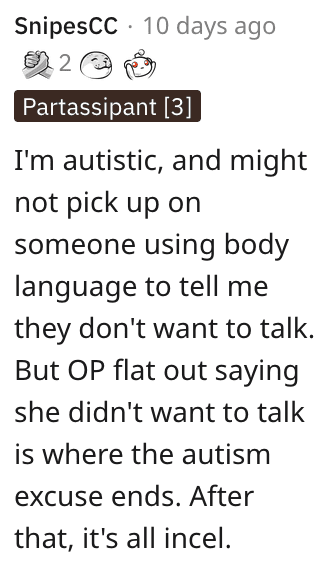 Another individual who is also autistic said this guy was also out of line.