Is it wrong to hide a pregnancy from people?

What about an actual birth?

And what if it’s from your own family?

Those are the burning questions in this story from Reddit’s “Am I the A**hole?” page.

After multiple check ups with different doctors it was determined that the changes of my sister ever being able to successfully carry a healthy baby to term were tragically low. Jenny was in denial and wanted to keep trying. We all tried to be supportive but as the years passed and other people around Jenny started popping out kids it made her……”different.”

The biggest turning point was when ex-BIL got fed up and left her so he could find a new woman to start a family with. At first she would just get all sad and depressed whenever someone close to her had a baby, but after our cousin got pregnant for the second time (in less than a year after the first) and had twins Jenny became bitter and aggressive.

It got so bad that our cousin blocked Jenny and has decided not to attend any future functions that she knows Jenny will be at. My parents have pushed for therapy but Jenny never sticks to a single therapist for more than three sessions because none of them “feel right.”

After the divorce she’s moved back in with them and pay all her bills. They even let her get a puppy despite my mom’s allergies, because it makes her feel better but she hardly ever picks up after it. I’d honestly just take the dog when no one was looking to re-home if I didn’t think it would make my sister worse and/or our parents would just get her a new one.

Last year I found out I was pregnant. It wasn’t intentional but my husband was excited while all I could think was “oh s**t Jenny is going to freak out.” One day when I was visiting was subtly trying to talk to my mom about the idea of me having a baby, Jenny overheard and came bursting in saying that me getting pregnant would be one of the worse things I could do to her as a sister.

She then started crying and I apologized and left. My mom sent me a text saying that I was wrong to bring something like that up knowing how Jenny is and I just started cry. After that I made a decision to just keep my pregnancy a secret and for 9 months that’s what I did.

I recently gave birth to a healthy baby girl. Now that she was here I knew I couldn’t hide it anymore and just sent my parents each a text. They both thought it was a joke until I FaceTimed them and became very angry at me.

They were hurt because not only did I hide something like this from them but that my husband’s parents knew and were very involved. I lost it and told them that it’s what they deserved after robbing me of the opportunity to enjoy my pregnancy because I was stressing out about how Jenny would react if/when she found out.

I’m starting to feel guilty because I know my parents are trying to be there for Jenny who’s going through something she can’t control, so AITA?” 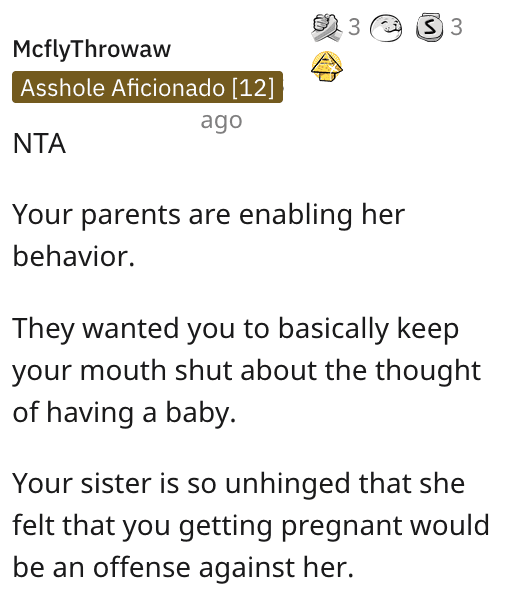 And this individual said she did this so she wouldn’t have to deal with all the stress her parents cause. 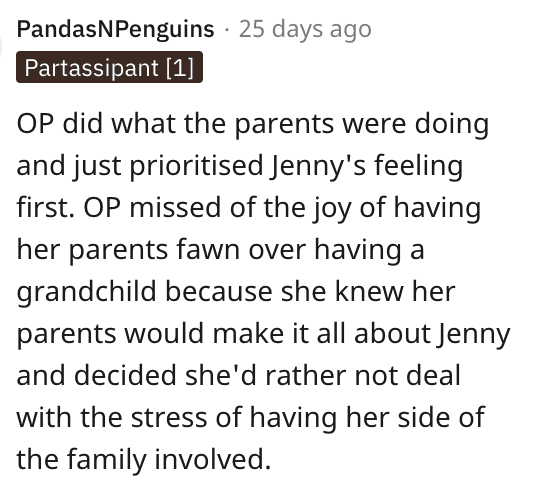 Another Reddit user said her family is unhinged and she should keep her distance from them. 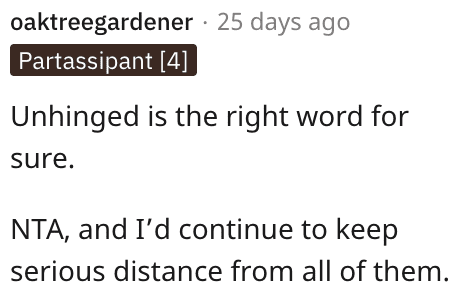