She Got Her Own Room and Stayed After She Was Kicked Out of a Group on Vacation. Is She a Jerk?

I think if I was given the boot on a group vacation, I’d cry, put my tail between my legs, and quietly go home…

But not this young lady!

She actually got another room and stayed. Wow!

Check out this story and let us know what you think in the comments.

“I am in college and my roommate from last year, Meg, who’s family is really rich, said she could bring a friend on vacation. It was kinda awkward, I was her third choice but her family vetoed the first two because they didn’t want her bringing a boy or this other female friend of hers they disliked.

Her parents bought my plane ticket and booked the resort which I was very grateful for and I saved a lot of money up so I could make sure I buy my own food and activities when I’m there, and treat her family to a dinner as a thank you for the ticket.

But when the trip started, it was just bad. It was her, me, her mother, her father, two of her father’s friends, and her three brothers going.

On the flight, they all got first class and got me a economy seat. But I didn’t say anything because why argue about a free ticket?

The first night they went to a grocery, it turns out they wanted to cook at the resort kitchen for the whole trip

And by “they wanted to cook” it actually turned out that they wanted me and Meg to cook. I wasn’t warned about this but it turns out Meg’s family is sooo “traditional” that they see cooking as a women’s job. And her mom had just had hand surgery.

So it was me and Meg cooking every meal for six men and her mom. And I can’t cook well. I know a couple staple meals to feed myself but since I rarely eat meat I don’t know how to cook it. I’m also ok at cooking for 1 or 2 but have no practice cooking for a group of 9

I screwed it up, undercooked chicken, and overcooked some steak and her dad was angry with me. I got short with him and told him that if he knew how to do better he could pitch in instead of standing around criticizing.

But he got furious and said he was on his vacation. I said that I was trying to have a vacation too, or did they invite me to be an unpaid domestic servant?

Meg’s parents and dad’s friends got angry I said that and started yelling at me.

The argument escalated, I sarcastically called myself “the help”

His dad snapped at me and told me to get out of their suite and go home. Didn’t say s**t about how he expected me to do that.

I left and called the airline with my ticket, and asked them if they could do anything to prevent anyone else from modifying or cancelling my ticket. They let me set a passcode, and no changes could be made to the flight without it.

Then I went to the resort desk to ask about rooms, saying I was stranded unexpectedly. They actually did have some affordable rooms available because of a weekday discount. So I got housing and still had money left over for touristy stuff.

I went sightseeing and relaxed on the beach for three days, until Meg’s parents ran into me. They were taking a sunset walk and did a double take seeing me on the beach. They said they thought I was going home, and I said I decided to stay. They were angry because they saw me staying and using the return flight as having deceived them into thinking I couldn’t afford a vacation, and using them for flights when I could actually afford things.

AITA for staying on that vacation and using the flight home?

One person said she’s NTA and that this was no way to be treated. 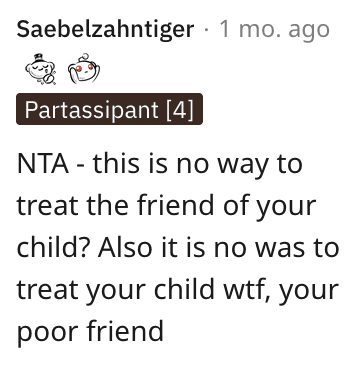 Another reader also said she’s NTA and that they feel bad for Meg, too. 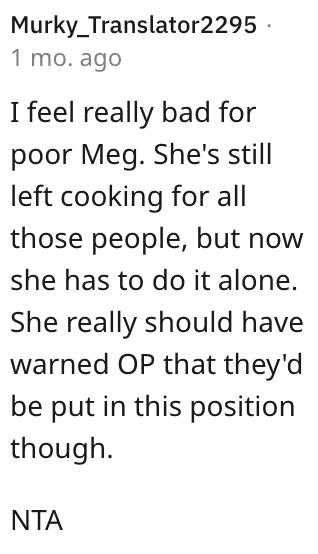 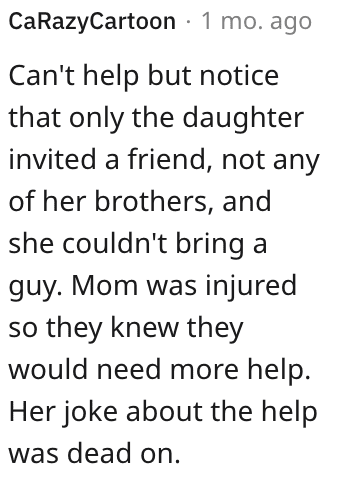