She Didn’t Correct Her Kids When They Told Her Ex’s GF She’s Not Their Mother. Was She Wrong?

You are NOT THE MOTHER!

We’re used to hearing variations of that phrase on daytime TV talk shows but what about when it happens in real life?

Read on to see if you think this woman was out of line for what she said.

“I have two sons ages 10 and 12 with my ex. We broke up over a number of issues. One of which was Emily, a woman he had worked with for years.

The two of them grew very close and she was always telling me how my ex deserved better than me, that I was trying to steal his family away from him. A few times she even pretended to be his wife during work functions and my ex would laugh them off. As well as that he was really bad with money and other stuff.

After we separated he made things official with Emily which came as no surprise to me.

Emily was even more openly hostile when she realized my ex’s family still liked me and would still include me. Not to mention when she realized my boys weren’t super happy she was their dad’s new girlfriend. Emily actually called ex’s mom a c*nt for saying I was the best mom when they were all having a family dinner.

My ex got a firm warning from the judge about using Emily to do exchanges of our boys, and to deal with custody issues. This was after her confronting me a number of times during exchanges in front of my children and of her showing not just hostility, but saying things that could be taken as alienation of a parent. He continued to allow this and ex was fined for breaching the judges orders. He was told if it happened again custody would be modified.

Recently there has been an increase in the anger toward me. Emily is unable to have children and she wanted the boys to consider her a mom. They asked me for help and I said nope. That Emily was not the mother of my children and I wasn’t going to encourage them to consider her one after the years of verbal abuse from her.

The boys had an award night back at the start of June at school and while there, Emily told the boys to get in photos with her for the school newsletter. They said no. She told them she wasn’t asking. They said she wasn’t their mom so she couldn’t say that.

My ex scolded the boys but I said nothing. Ex and Emily said I should have backed them up and not allowed disrespect. I told them I did not find what they said disrespectful. They have claimed I am a s**tty parent and I should not have let my kids get away with that. And I am teaching them to disrespect women, etc.

So now I am here to find out AITA?”

This person said she’s NTA and that the kids were just stating the facts. 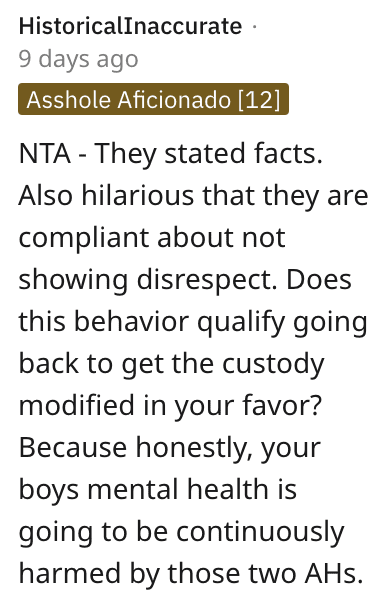 And this Reddit user suggested that the boys should go to therapy.

Another individual also said she’s NTA and that these kids should definitely go to therapy.