She Caused Her Friend’s Daughter to Go to the Hospital. Was It Really Her Fault?

You really gotta be careful when it comes to kids and what they might be allergic to.

With that being said, maybe it’s not always someone’s fault if a kid ends up getting sick because of something they ate…

Read on to see what happened in this tale from Reddit’s “Am I the A**hole?” page.

“I know the title sounds horrible but I don’t know how else to put it.

I am not a very busy person. I don’t start college until September and I don’t have a job, so not much to do.

A few weeks ago my friend Alice (22F) came to my door with her daughter Milly (3F) and told me she really needs me. Apparently she had an emergency to attend to and she needed an urgent sitter. She didn’t really ask and just gave me the kid and a bag of toys and books and told me she would be back in a few hours.

I have no problem with this, Milly is a very sweet kid and she knows me well enough to be comfortable around me. Still it was a bit unexpected but I was going out to the cinema so I thought I would take her with me and we would walk around a bit and watch something.

Everything went smoothly, we watched a movie together, Milly seemed happy, and I was enjoying my time as well. Then we went to the park and I thought it would be nice to get us some ice cream.

We both had vanilla swirls and she seemed to enjoy it for a bit but as soon as we got home she started throwing up and developed what seemed to be a rash. I thought maybe she got a bug or something and called her mom but when she didn’t pick up I took her to the hospital.

Apparently, Milly has a mild allergy to dairy. Alice did not tell me this. I have never seen Alice give her dairy but I thought that was a dietary choice and to be honest, I did not take that much notice to it. I never knew this explicitly.

She was safe and nothing bad was going to happen to her but she was obviously very uncomfortable until the antihistamines kicked it. I kept calling Alice and she only picked up a few hours later and as soon as I told her we were at the hospital, she got furious.

When she came in she yelled at me telling me I was trying to kill her baby because I had to take care of her on such short notice and I was an idiot for not knowing her child would react like this to ice cream.

I apologised many times, sent them cards and a present for Milly but apparently she has been telling our group of friends that I tried to hurt Milly and I should not be trusted around children.

Some of our friends berated me for my lack of attention and told me I would have to carry the responsibility if anything worse had happened to Milly. I tried to explain I didn’t know and nothing worse was going to happen and I did my best to help her but it still became a divisive event.

AITA? Is it really all my fault? I really want what’s best for Milly and I would never do anything to hurt her.” 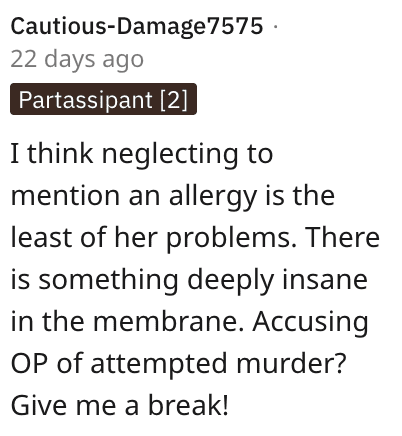 And this Reddit user said this parent sure seems awful neglectful. 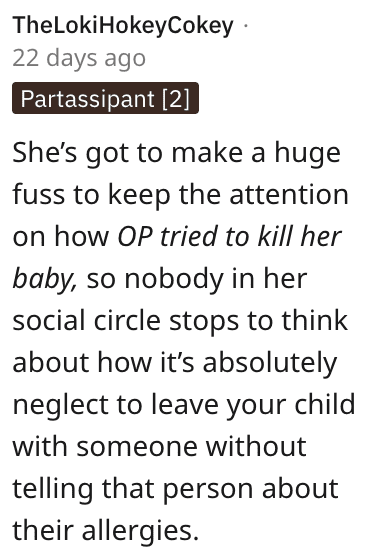 Another individual said this woman is NTA and that this wasn’t her fault.