She Bluntly Told a Woman It’s Not Good to Put Essential Oils on Her Private Parts. Was She Wrong?

Don’t put that there!

Hey, I’m a big fan of people minding their own business, but sometimes you have to speak up if you think it’s gonna help someone out, ya know what I’m saying…?

Take a look at this story from Reddit’s “Am I the A**hole?” page and see if you think this woman was out of line for what she said to another lady about some essential oils…

Maybe she was only trying to help…

“My uncle’s new girlfriend came to family dinner the other night and it was the first time anyone in my family met her.

She is super into essential oils which is very eyeroll inducing for me but I didn’t say anything about it or show that I found it annoying at first. I bit my tongue while she went on about putting them in her water (you should not be ingesting essential oils) and rubbing them on pressure points and trying to convince my mom to buy some.

But then she brought up that they can be super good for yeast infections!!? I looked at her super horrified and asked “you mean you’re putting them down there??” And she said yes you just insert a few drops and it clears up right away!

I told her this was very dangerous and could cause chemical burns as well as throwing off your v**inal ph and potentially causing other infections. She said “oh no you don’t have to worry about that they’re all natural!!”

To which I replied “so is poison ivy but I wouldn’t suggest shoving it up your v**ina.” She just looked kind of shocked. My sister laughed and my aunt said “well she has a point,” but other family members said that it was rude and crass.

Which I didn’t think so because she’s the one who started talking about yeast infections at a family dinner certainly saying the word v**ina is less crass than that.”

One person said she’s NTA…at all! 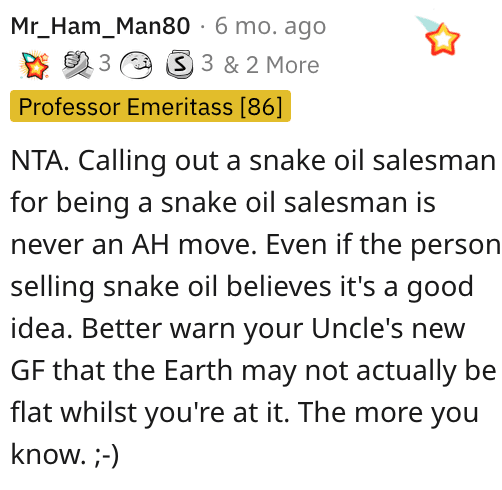 And this individual said that if you think a certain word is crass, you need to grow up. 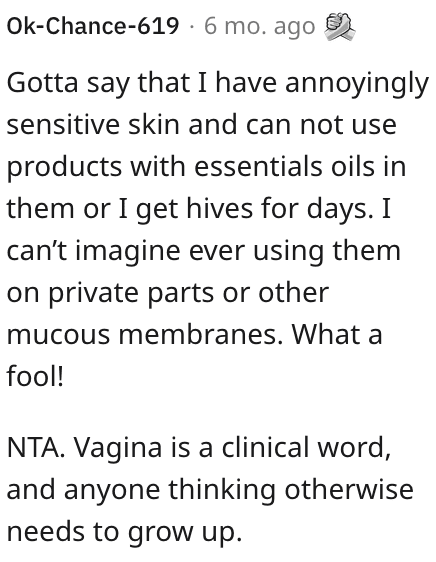 Another Reddit user said she’s NTA and they shared their own personal horror story that happened to them with essential oils. 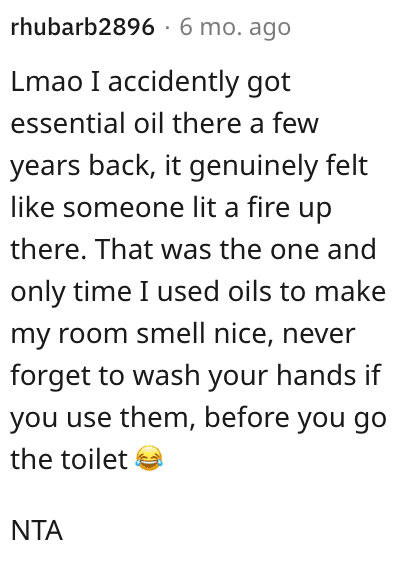