Isn’t vacation supposed to be for…vacation?

Maybe I’m the crazy one here!

But let’s get all the details before we make a call on this one, okay?

Read on to see if you think this woman was an a**hole for ignoring her boss on vacation.

We take turns visiting each other. He came to see me after almost two months of not seeing each other. We finally were to make plans. I requested to have five days off was approved from my job. I’ve worked there for six years.

It was after my shift, and I was heading out quickly. I had to pick my bf up from the airport. I clocked out, and while I was saying bye to everyone. My new boss of 2 weeks stopped me, and he asked if I could cover a shift. Since one of my co-workers called in sick. We’re short-staffed, and he needs me to stay for a couple hours more. I had a 10-hour shift. I was exhausted.

I responded no. I’m sorry, but I’m unable to, and I can’t stay late. I have covered it before in the past. I don’t mind, but I had somewhere to be. I mentioned I was picking up someone at the airport. He told me they could take an Uber. My boyfriend wouldn’t be happy with me if I did with him. Also he has no key to my apartment.

No one else wanted to stay, and I was the third person he asked to that said no. I said sorry, I can’t just tonight, another time.

He called me a lousy worker, and I’m not a team player. I said, guess I’m not a team player and I walked passed him. I called out. I’ll see him in five days. While driving to the airport, I kept getting calls and texts from him; it got so bad that I had to pull over to turn off my phone. My boss wanted to come back to work.

I had to turn on my phone, so my boyfriend could contact me. My phone was flooded with text messages. Ding after ding I think I got close to 15 texts. I blocked his number.

I was so happy to see my bf. I was getting emails from my boss constantly when I was supposed to be my time off. I didn’t respond to and I rarely take vacation. One, he was asking me stuff that I didn’t know the answer to. Second, even if I did, I’m not telling him. I don’t know; I was starting to get petty.

I still had fun with my boyfriend. When I went to work, my boss called into his office. He blew up at me for being unprofessional, and he’s still new to this job. I should’ve helped or at least replied to the emails. I responded other people could’ve helped him. It’s not my responsibility when it’s my vacation time. I got my first write-up ever.

Is this something I’m missing? Did I do something inherently wrong here? I’m actually considering to report him. He is still new to his job.

This person said she’s NTA and she needs to bring this issue to Human Resources. 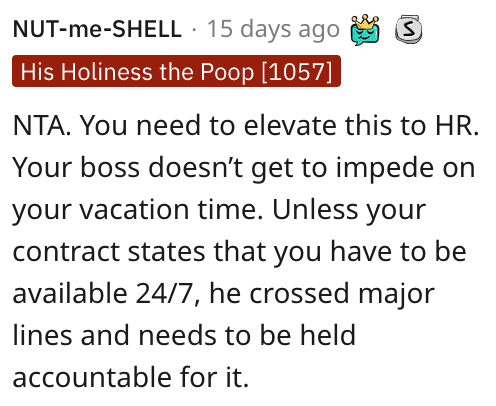 Another individual said that he also needs to be reported because he’s probably still in this probation period at work. 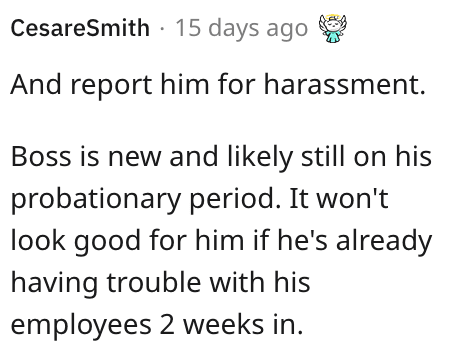 And this Reddit user said she’s NTA and no one is obligated to work on vacation. 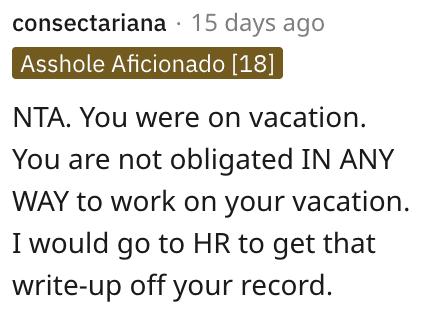 Thanks a lot, friends!

12 People Get Real About What They Find Incredibly Annoying