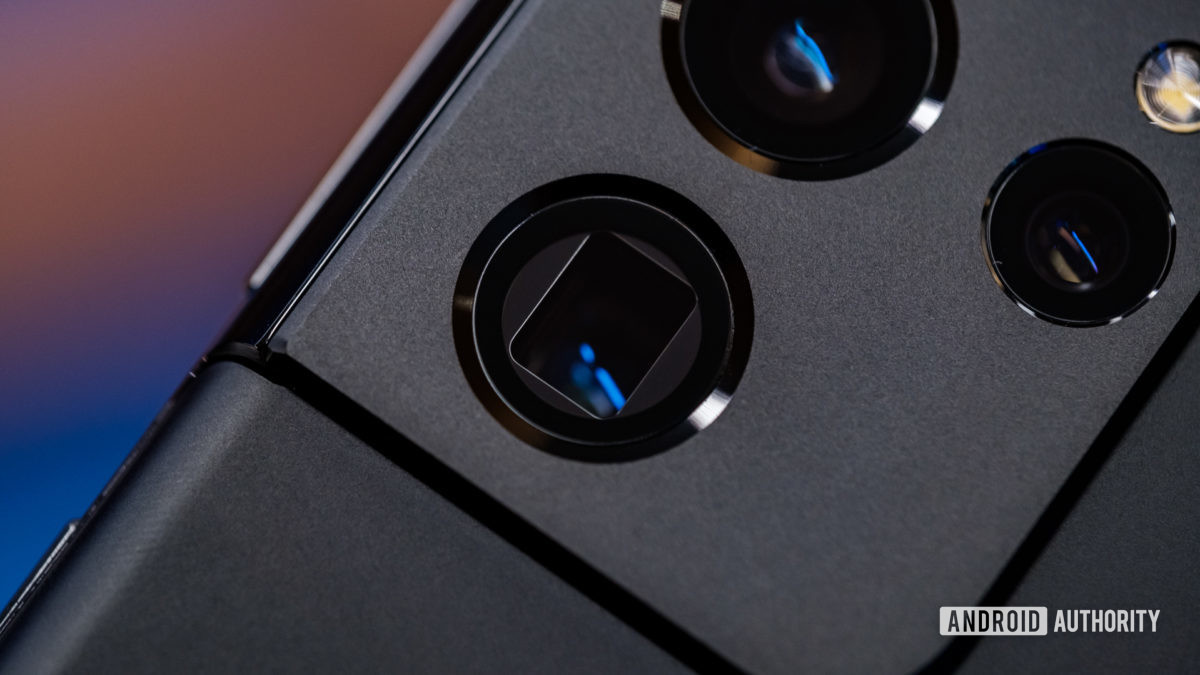 When it comes to photography, Samsung’s latest Galaxy S21 and S21 Plus are unchanged from last year’s Galaxy S20. But that doesn’t mean the company doesn’t have anything exciting to offer the more demanding shutterbugs out there in 2021.

To see how much of an upgrade is on offer for $1,199, we’ve pitted the Galaxy S21 Ultra against one of last year’s ultra-premium powerhouses of photography — the Huawei P40 Pro Plus.

Before we dive into a selection of sample shots, let’s recap how the handsets compare on paper.

Both feature large, high-resolution main sensors designed to capture as much light as possible. Testing will tell whether Huawei’s RYYB color filter versus Samsung’s ISCOCELL approach produces the best results. Samsung offers a wider field-of-view with its wide-angle camera, but Huawei provides a much bigger sensor and higher resolution, which will likely produce enhanced detail.

There’s a fair bit of familiarity when it comes to zoom capabilities too. The two handsets use 3x telephoto and 10x periscope zoom cameras to cater to shorter and long-range distances. This dual-camera approach should solve the quality gap that occurs with a single zoom camera. What may well separate these small sensors and narrow apertures is how well they capture detail in lower light scenarios.

Without further delay, let’s get into the images.

Both handsets produce very high quality looking images from their main sensor at full-frame. Samsung offers a little extra saturation, but it’s less jarring than in previous years. The phone also has a cooler color palette in some of its pictures. The company’s HDR implementation produces particularly excellent results with brightly lit backgrounds. Huawei’s images come out a little darker and warmer (the occasional red tint still remains) but overall both offer solid exposure and white balance in these daylight pictures.

Diving deeper into some 100% crops might reveal some more meaningful differences.

Details are great on both phones. You can see this in the texturing on these fake flower petals. There is some softness and a haloing effect around edges outside of the main focal point in Samsung’s picture. This could be an artifact from HDR processing or multi-frame image stitching, but it’s quite hard to tell. Fortunately, the effect is small enough that you can’t see it in the full-frame image. At the same time, Huawei dials up the color saturation a little too much here, leaving the Galaxy S21 Ultra looking a tad more realistic.

While there’s a color balance difference to this full-frame shot (the Galaxy S21 Ultra ending up cooler than the Huawei P40 Pro Plus), the color processing for the subject is essentially identical — both are excellent. Fine details are also virtually indistinguishable. Although very close inspection of the Galaxy S21 Ultra’s shot hints at a slight more reliance on post-processing to clean up the image. This is particularly noticeable with the sharpening in the trees. This more artificial look may also be an artifact of the sensor’s nona-binning technology, which converts the 108MP sensor into brighter 12MP outputs. Again though, you’ll only notice this difference when peeking at these 100% crops.

With darker shadows and tougher to discern details, both phones have their pros and cons. Pay very close attention to the textured greys and shadow details, which look a lot noisier in Samsung’s photo. However, the Galaxy handset manages to extract some of the rivets on the steel pillars which are completely absent from Huawei’s more heavily denoised, darker photo. However, the S21 Ultra also has a few problems with highlight exposure, which are blurry for some reason. This may be a result of the company’s HDR implementation.

Similar differences in detail are observed when closing in on this portrait shot. Samsung is clearly a little heavier on the processing here, with a notable sharpening pass visible on hair and skin lines. At the same time, the S21 Ultra applies more smoothing to face textures. Huawei’s image is definitely softer and a little blurry, but the details and skin textures look more natural on this close inspection. An interesting difference here is that Samsung opts for a much stronger blur while Huawei’s is more subtle.

Again it’s down to very small differences when shooting in decent lighting. Both phones offer good edge detection for the portrait shot, thanks to assistance from laser focusing sensors. All four of these images end up with solid colors, and dynamic range regardless of which handset they were shot with. The most obvious difference is their color balance and Huawei’s tendency to underexpose a little. Although we could equally say that Samsung overexposes just as often. The correct balance is somewhere between these phones.

Both phones take good looking daylight pictures with their wide-angle camera. Importantly, processing capabilities appear to be a match between the wide and main sensors on both phones. Although Huawei’s wide-angle doesn’t seem to inherit the red tint issue we sometimes see with the main RYYB sensor. The P40 Pro Plus also takes wide-angle pictures in 16:9 rather than 4:3.

As we noted in the spec rundown, the Samsung Galaxy S21 Ultra offers a wider field of view by quite a margin. You can fit a lot more in with the Ultra, but the pictures end up with more of that wide-angle “fishbowl” look. Even so, Samsung has done a good job at lens correction and keeping distortion under control. It’s a very good wide-angle camera.

Huawei’s narrower field of view provides cleaner images when cropping in. The camera offers exceptional detail that’s miles ahead of most of its rivals. While this is typically less important with wide-angle lenses, the extra quality comes in handy when the handset switches to the wide-angle lens for macro shots.

Both of these smartphones offer optical zoom quality at 3x and 10x. You’ll struggle to pick out any major differences between the phones at 3x. The two offer good exposure, colors, and white balance at this range.

See also: The best budget camera phones you can buy

Moving on to 10x. the Huawei P40 Pro Plus struggles with exposure in the shot above, despite both using a periscope camera design. The small sensors, narrow apertures, and multiple mirrors found in periscope camera designs can cause light detection issues, which most likely explains this underexposure. This small issue isn’t limited to the P40 Pro Plus, however. The Galaxy S20 Ultra comes out slightly darker at 10x in the show below. Although it’s nowhere near as noticeable as the first example.

Samsung’s Galaxy S21 Ultra and Huawei P40 Pro Plus provide extendable digital zooms out all the way to 100x. Neither phone produces good results at that long-range, with essentially no detail captured. Even at 30x, both phones appear heavily processed and also struggle to extract decent amounts of detail. The Galaxy S21 Ultra’s 30x samples retain a fraction more detail, although this comes with a heavy oversharpening pass. Huawei’s long-range zoom efforts are a little too heavy on the denoise.

Overall, both smartphones the same level of zoom flexibility thanks to their dual zoom cameras. The setup is a definite improvement over the single zoom camera options included in more affordable flagship phones. While the differences are small, Samsung ekes out a small advantage for image quality at extreme ranges.

The snow in our low light scene reveals a lot about the phones’ color processing and white balance in the dark. Huawei’s dreaded red tint makes a resurgence here, warming up all of our snow pictures with an overly warm hue. The colors are also rather washed out as a result. Granted, you won’t see this issue as noticeable in shots with less white content in them, but it’s clearly a major issue with Huawei’s camera setup.

Samsung’s Galaxy S21 Ultra, by comparison, hands in a much more realistic white balance. Colors and light sources also pop with the appropriate level of realism, and there’s a generally good level of dynamic range preserved in these tougher conditions.

Cropping in a little closer on our shots also reveals that the Samsung Galaxy S21 Ultra snags extra detail that you won’t find on the Huawei P40 Pro Plus. There’s more notable definition on the building slats and even in the snow on the ground, although Samsung’s image still has a heavily processed look when cropping into 100%. Huawei’s image isn’t lacking detail as such, but the company’s approach to denoise and color processing problems end up resulting in the loss of some fine details on very close inspection.

Just like some of the daylight shots earlier, there’s a noticeable amount of smearing and smudging in areas of Samsung’s image. Particular nearer the edges of the main camera lens, which you can spot in the tops of the trees. The perspective of this house also looks a little weird and stretched, pointing to a less than perfect lens distortion correction algorithm. Although again, this could also be due to long exposure or processing times, and/or multi-frame HDR image stitching.

In the end, both handsets perform well in low light, but it’s clear that Samsung is out in front when it comes to color processing and white balance for your full-frame image. 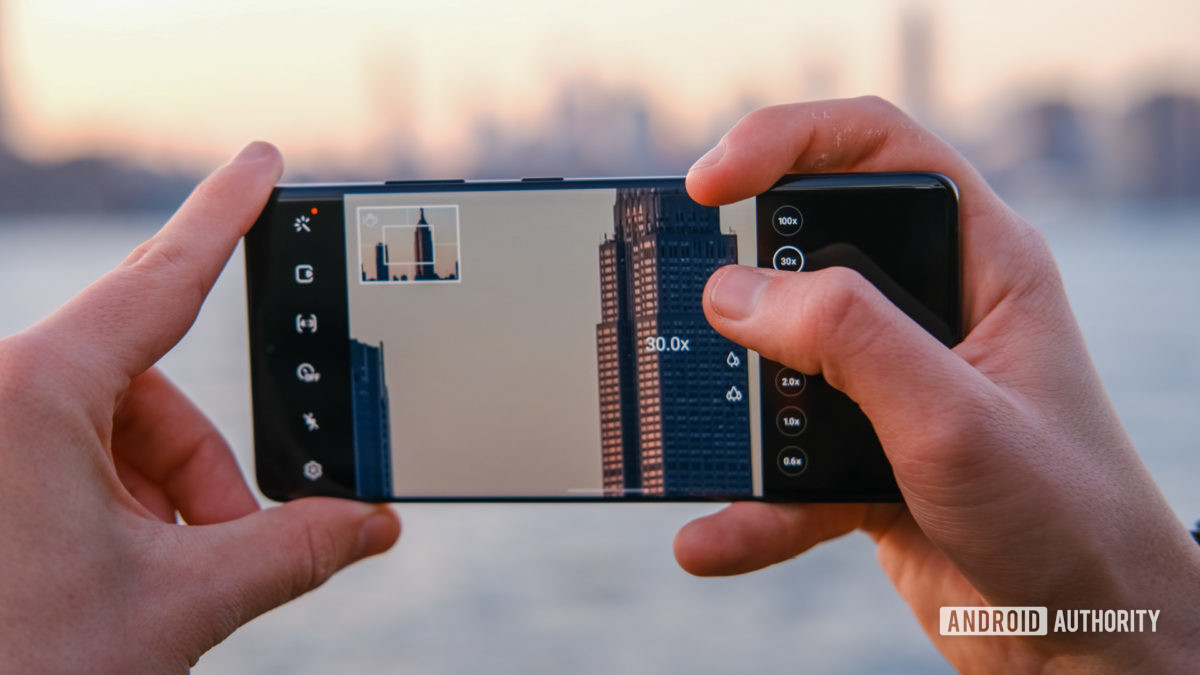 As you’d expect from two ultra-premium camera smartphones with rather similar specs, the results are close. Very close. Especially when examining the photos at full-frame, as most photographers will. That said, each phone has a few identifiable pros and cons.

I’m more of a fan of Huawei’s softer, more natural-looking portrait photos and the general lack of noticeable processing artifacts. The P40 Pro Plus’ wide-angle camera is also one of the best in the business for detail. That said, the RYYB main camera still suffers from a red tint all these months later and Huawei’s photos come out too dark on occasion.

The Samsung Galaxy S21 Ultra is slightly more consistent with its exposure, white balance, and HDR processing than the Huawei P40 Pro Plus. That’s enough to tip the phone into the lead, despite the odd HDR blurring and overexposure problems. To its credit, the Galaxy S21 Ultra offers a much wider field of view with minimal distortion too, which is usually what customers are after from an ultra-wide lens. Most importantly, Samsung has vastly improved on the Galaxy S20 Ultra’s inconsistencies this year, with more natural colors, much-improved zoom capabilities, and more precise autofocusing from its 108MP main sensor.

We’ll be putting the Samsung Galaxy S21 Ultra through its paces against other great camera phones in the coming weeks. In the meantime, what do you think about the pictures taken with the S21 Ultra?