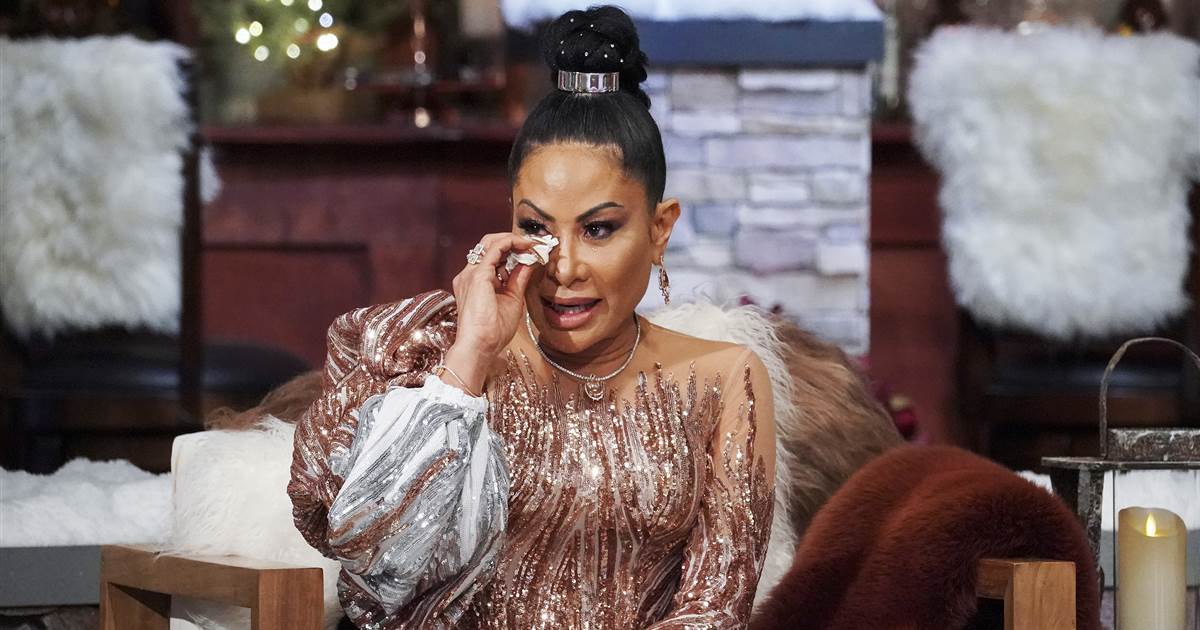 Shortly after “Real Housewives of Salt Lake City” star Jen Shah was arrested on charges of conspiracy to commit wire fraud and money laundering, fans started sharing an old tweet of hers that felt suddenly very prescient. Retweeting a picture of her shouting at her co-stars eating lunch, Shah wrote, “Teresa walked so I could run.”

Shah was obviously referencing “Real Housewives of New Jersey” star Teresa Giudice, who is famous for “flipping” a table in the show’s first season finale. The other thing Giudice is famous for? Getting arrested for fraud. So yes, in this instance, it does look like Teresa walked so Jen could run. But in both cases, the law caught up.

In 2014, Giudice and her husband, Joe, pleaded guilty to multiple counts of fraud. Giudice spent about a year behind bars (and then wrote a best-selling book about it). Her husband spent almost four years in prison and was then deported to his native Italy. The couple then got divorced. Anyone who watches the show knows all this because it has all been chronicled on Bravo. (As has Joe Giudice’s new business venture selling female, ahem, “massagers.”)

So does Bravo’s crown jewel attract grifters? Does its dedication to conspicuous consumption lead people to a life of crime so they can afford to stay on the show? There are certainly plenty of other petty grifters who have signed on to the reality franchise over the years.

Who can forget Michaele and Tareq Salahi, otherwise known as the White House party crashers, who breached White House security in 2009 to attend President Barack Obama’s first state dinner without a ticket, a caper that was excellent fodder for the show. No charges were filed, but there was a literal congressional investigation.

Dana Wilkey, who appeared on season two of “Real Housewives of Beverly Hills” and famously wore a pair of $25,000 sunglasses, gave herself over to the FBI in 2014 after she was accused of defrauding an insurance company of more than $300,000. She pleaded guilty to “misprision of a felony” (which means knowing a crime was committed but not telling the authorities) and got probation.

The ladies’ gentlemen aren’t much better behaved. Vicki Gunvalson’s ex-boyfriend Brooks Ayers faked cancer documents on “Real Housewives of Orange County” (though he maintains he was really diagnosed with cancer). “RHOBH” star Erika Girardi left her husband of more than 20 years, Tom Girardi, once the lawyer was accused of funding their lavish lifestyle by misappropriating client money.

It’s hard to tease out the correlation and the causation between Housewifery and fraud, particularly because many of these crimes started long before the show.

It’s hard to tease out the correlation and the causation between Housewifery and fraud, particularly because many of these crimes started long before the show. Shah’s alleged telemarketing scheme targeting older people has been going on since 2012, according to prosecutors, years before sticking a ski pole in Salt Lake City was even an idea for Bravo. (Shah has pleaded not guilty.)

Also, if the show and its somewhat unattainable lifestyles were a cause for theft, there would be a lot more criminals on this list, considering the over 100 women who have been cast throughout the various series’ lifetimes. There have been no allegations against Bethenny Frankel, the Ur-Housewife, or her Skinnygirl lifestyle brand fortune, for instance. Even Ramona Singer, the infamous “Real Housewives of New York” star, hasn’t had her business called into question.

But there is definitely an overlapping in the Venn diagram between good reality TV and a certain kind of crime. To be a good Housewife requires performativity, narcissism, a comfortability with risk, charisma, self-mythologizing and often a little bit of aggression. Those are, I assume, some of the very same qualities it takes to lead a life of financial crimes. It’s not that one leads to the other; it’s just that there’s bound to be some overlap. Plenty of Americans spend their lives trying to look richer than they are — and what better way to accomplish this than being cast on a show about the lifestyles of the privileged.

The best Housewives are people who are willing to completely let the cameras and the viewers into their lives. As Frankel once said, a Real Housewife is someone who will “mention it all!” But this is also where some Housewives run into trouble. The premiere of “RHONJ” famously showed Teresa Giudice shelling out more than $100,000 in hundred dollar bills for furniture for her brand-new, all-marble mini Versailles. She thought it made her look like a baller; it also made her look suspicious.

The same fate befell Shah, whose conspicuous displays of wealth on the show didn’t seem to match up with her day job. Many fans were left wondering where, exactly, the money was coming from, why she had such lavish offices, why she required so many assistants and why she needed a staff of seemingly hundreds just to do her hair, makeup and clothing every day.

She was even asked about her job at the first season reunion by Andy Cohen. “My background is in direct response marketing for about 20 years, so our company does advertising,” she responded. “We have a platform that helps people acquire customers, so when you’re shopping online or on the internet and something pops, we have the algorithm behind why you’re getting served that ad.” If that sounds confusing and possibly like a scam, you’re not alone. Utah prosecutors also would like a word.

And therein lies the Catch-22 for shady Housewives. Fans almost always know something sketchy is going on — and anyone under the penetrating gaze of the cameras can only hide their dirty laundry for so long. Their fame alone can make them a target. Just look at the gatecrashing Salahis: They likely weren’t the only ones to try to sneak into the White House that night, but they were the only ones hauled before Congress, because they were (seemingly) the only ones who committed the auxiliary offense of wanting to be famous.

The Housewives franchise attracts extreme people doing extreme things, and sometimes those things are illegal. It also attracts attention, which is then likely to bring those illegal things into the light. It’s hard to know exactly which comes first, but it does seem like parallel train tracks inevitably converge. What happens when they do? A train wreck, of course. And train wrecks make for great TV.

Brian Moylan is a freelance journalist who specializes in television, celebrity, and other very important matters. He lives in London.