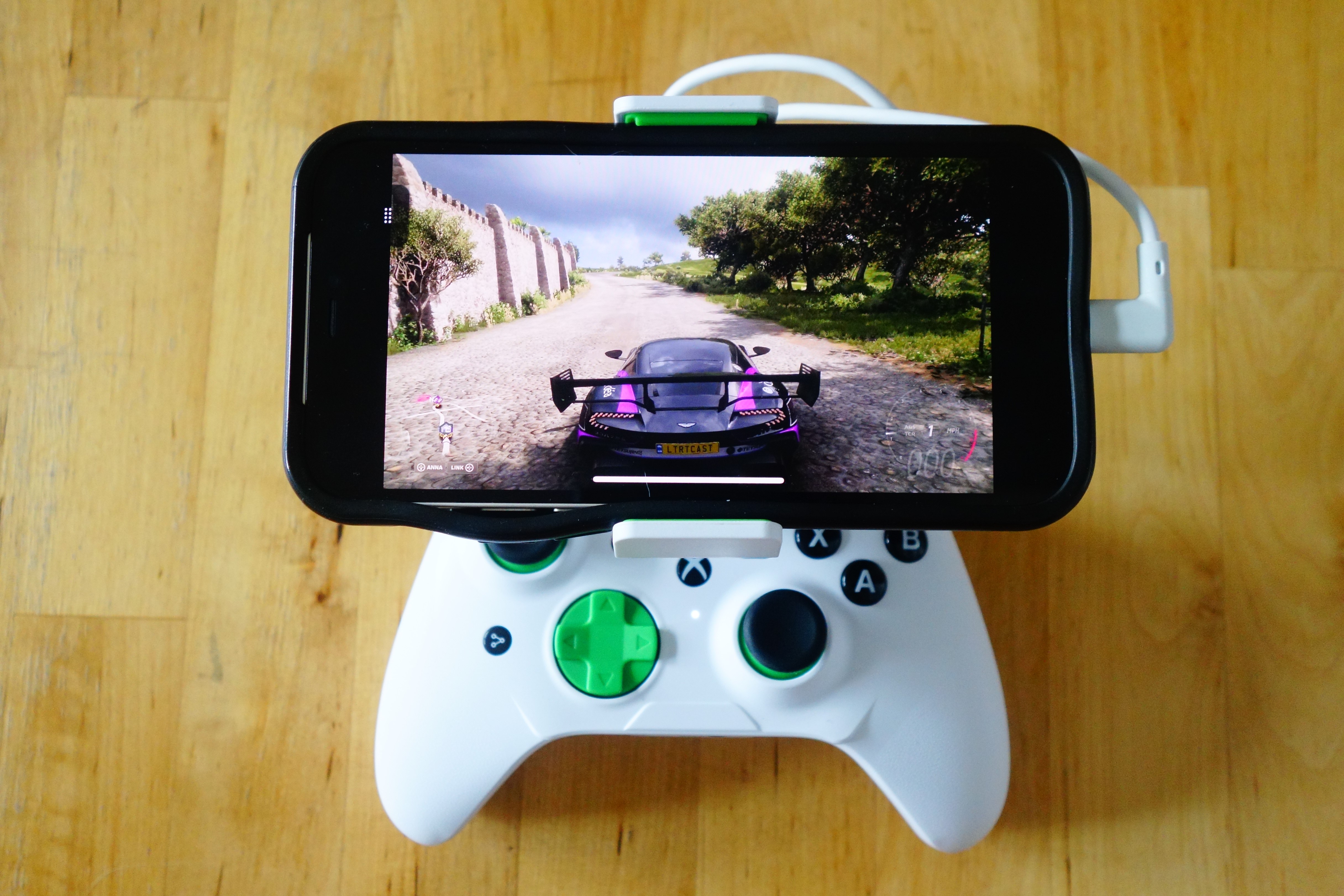 “RiorPWR Xbox Edition is a well-made cloud gaming controller, but one that’s outperformed by the competition.”

The RiotPWR Xbox Edition controller is a great cloud gaming solution that you probably shouldn’t buy. On paper, it’s an ideal companion for Xbox Game Pass subscribers who want to turn their phone into a portable cloud console. It’s a solid and versatile mobile gaming device anchored by a sturdy and good-looking controller. If it was still 2020, this would be the best cloud gaming device on the market.

However, it is 2022 and this market has changed rapidly in just two years. After a few years of experimenting with flimsy controller clips and overly complicated phone contraptions, detachable gamepads like the Backbone and the Razer Kishi have found the perfect formula for turning your phone into a portable console. Going back to the old ways is hard, though RiotPWR makes an incredibly strong case for its admittedly dated approach.

If you want to use a familiar controller for your cloud gaming experience, RiotPWR Xbox Edition is a thoughtful option that pairs perfectly with the Xbox Game Pass app. Its design quirks and price point make it a tough sell, given today’s tough competition.

Rather than creating phone clips or controller attachments, RiotPWR creates all-in-one products that turn a phone into a handheld console. Their products come with a custom controller and a built-in clip that different devices – from phones to tablets (sort of) – can easily snap into. The Xbox edition is the most attractive product in the lineup yet, as it replicates the design of a traditional Xbox wireless controller.

It’s hard to shake off the feeling that the company’s core design philosophy is a bit outdated by today’s standards.

In a vacuum, it’s a slam dunk. If you’re using the Game Pass mobile app for cloud streaming, it’s the best portable technology you could hope for. The dedicated Xbox button layout means you can easily play games from the platform without having to remap a more generic gamepad layout. Something as simple as having an Xbox-branded home button negates the “workaround” feel of many cloud gaming devices, including some of RiotPWR’s own controllers (the trade-off is you might end up feel a bit confused if you try to use it with, say, PSPlus).

As part of my testing, I went back and forth playing some games on my Xbox Series X and then switching to handheld gaming with the RiotPWR. The transition was seamless. I was able to load my save files and adapt to playing on the go without friction since I was using virtually the same layout. I should just take into account the extra weight a device like this brings when weighed down by a phone, but that’s to be expected.

The more you put it into context, the murkier the value of the device becomes. At $70, the RiotPWR is more expensive than a regular Xbox controller. If you already own an Xbox, you could just as easily buy a $20 or $30 clip (like the one offered by Otterbox for Xbox) and create the same product for less money. It’s more of a value if you don’t own an Xbox controller at all, but not many.

The biggest challenge, however, is that the RiotPWR competes with the Backbone and the Razer Kishi V2. Both attachments are positively graceful, transforming your phone into a Nintendo Switch by simply attaching lightweight side grips. I’m not sure why you would want to go for a heavier full controller setup when both options are available. RiotPWR is $30 cheaper, and its Xbox gamepad makes it more familiar (though Backbone does launch into console-specific variants), but it’s hard to shake off the feeling that the core design philosophy of the business is a bit dated by today’s standards.

With that key caveat out of the way, let’s focus on what the device actually is. RiotPWR is very good at what it does, although it currently feels behind the curve. The controller itself feels just as good as a standard Xbox controller, with a few fine details. It’s lightweight with responsive buttons that click almost like a mouse switch. This is not a cheap reproduction; it almost feels like Microsoft did it, not a third-party company.

I particularly like the overall aesthetic here. Rather than using the standard Xbox black color scheme, the RiotPWR is white with bright green accents below the controllers and on top. It’s almost a Nickelodeon slime look, but it’s one that looks like a good match with the Xbox brand.

The only thing that bothers me is its menu buttons which are placed flat into the controller rather than popping out. It can be a bit difficult to touch them, especially when a phone is clipped. It tends to hang over these knobs at just about any angle, meaning you have to jam your fingers underneath and look for the groove. On the plus side, it packs a dedicated share button on the left side, which is a nice touch that goes beyond what a proper Xbox controller deals.

I’m impressed with the overall quality of the RiotPWR, which almost feels like a first-party device.

The mobile clip itself is particularly well designed. It’s a separate piece that can be firmly inserted into the front of the controller (the slot has a rubber stopper when not in use), so it’s easy to take it apart and pack it for a trip . The stand seems pretty solid, hugging my phone with a pressure that makes it secure. It also gets good angle range, as I can bend it so my phone is almost perpendicular to the gamepad or snapped so far back that I can’t see the screen.

I’m impressed with the overall quality of the RiotPWR, which almost feels like a first-party device. I think it’s something I’ll probably end up using from time to time, but probably more like a desktop cloud controller than something I take on the run.

The RiorPWR is starting to really lose points when it comes to a few notable design quirks. Chief among them is its approach to connectivity. Rather than connecting wirelessly to your phone, it only connects via a Lightning cable, specifically one that sticks out the back of the controller. The thread is excessively long and hangs awkwardly when reading. The holder has a small groove to secure the wire in place, but it cannot hold more than one wire pass. Mine wraps at least twice so there is always a loop hanging down even when cut.

With your phone’s Lightning port in use, you can’t use it to charge it while gaming. To solve this problem, the controller itself has a lightning port at the bottom, which allows direct charging. It might feel a bit annoying to have a charging wire dangling in your hands, especially since it’s next to the headphone jack (although it’s weird to have a headphone jack at all when the your iPhone’s Lightning cable port will still be used during playback).

The scope of the mount is also a bit limited. Although the box says it supports iPads, I have no idea what would fit. I have one iPad Mini and the clip does not extend enough to fit it. My iPhone 12 can fit in the clip with its slim case, but a small rubber bumper means I couldn’t fit my phone in if it were just a little wider. If you are using a thicker case, you may need to remove it before inserting it.

I just don’t know how to justify a full recommendation, no matter how many ways I slice it.

Quirks like that impact overall value, which RiotPWR can’t really afford to lose here. Considering how tough the competition is, any otherwise minimal annoyance turns into a much larger knock against it. On some level, I really like the RiotPWR Xbox Edition. It’s a smart device that complements the Xbox ecosystem well. Anyone who strictly plays console-quality games on their phone could probably benefit from this. I just don’t know how to justify a full recommendation, no matter how many ways I slice it.

The RiotPWR Xbox Edition is a well-built cloud gaming controller that feels almost as good as a proprietary device. It’s a great Game Pass companion thanks to its Xbox gamepad layout and sturdy mobile support. It’s just a matter of competition. It doesn’t really compete with anything like the Backbone or even just a regular Xbox controller with a mount, especially given its $70 price tag. It’s a great mobile device, but not a great mobile device for 2022.

The Spine and Razer Kishi V2 are more expensive, but more graceful cloud devices. If you already have an Xbox controller, just get something like Otterbox’s Mobile Clip and save some cash.

The clip itself looks solid, but it’s at the mercy of phone makers. If the iPhone gets thicker, for example, it may not fit into the line.

No. It’s a great device for what it is, but it’s hard to justify buying it at this price when there are better solutions out there.

Alyssa Limperis on turning grief into comedy in No Bad Days