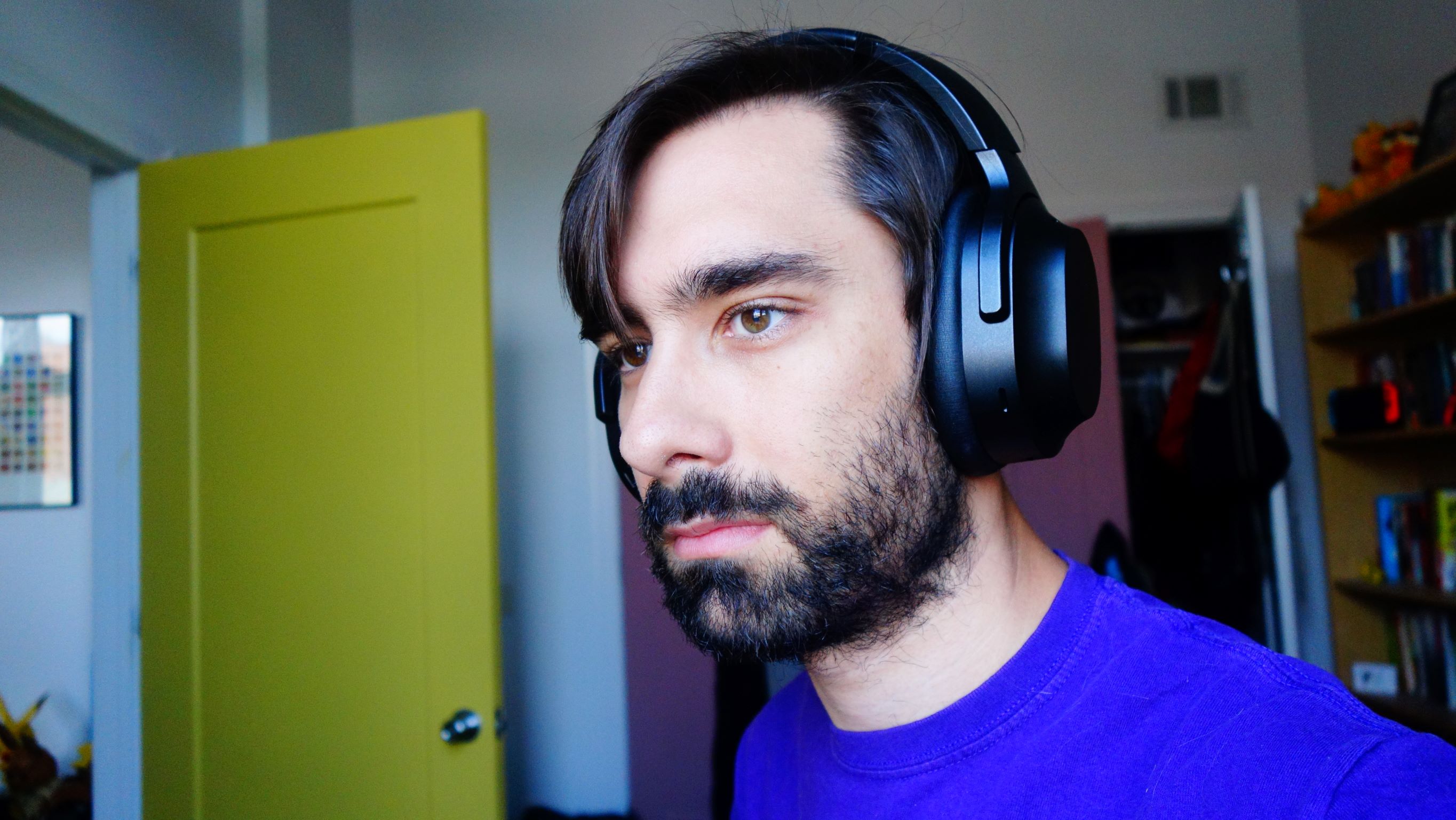 “The Barracuda Pro makes some unfortunate sacrifices to create an understated gaming headset, but it makes up for it with excellent audio quality.”

Razer’s Barracuda Pro is a gaming headset that poses an important question: what if being a gamer wasn’t completely embarrassing? As someone who loves games but doesn’t love the raucous “gamer” aesthetic that comes with it, I can’t stand most products and accessories marketed for gamers. Ridiculous chairs, obnoxious RGB lights, flashy headsets – it’s hard to play games without having some kind of noisy statement piece in your home.

Although Razer is very much an instigator of this trend, the Barracuda Pro is aimed at people like me. Rather than creating a futuristic headset with bright green accents, Razer’s latest is as unassuming as a pair of Bose or Sony wireless headphones. It’s an attempt to merge the specific qualities of a gaming headset into a more lifestyle-friendly design. It’s an admirable argument, although sometimes these two ideas are a bit opposed to each other.

The Barracuda Pro is a solid option for gamers who want a more versatile gaming headset with an understated look. It just comes with a few key trade-offs and quirks, including poor microphone quality and a steep price tag.

Perhaps the most important feature of the Barracuda Pro is that it looks like a perfectly normal pair of headphones. It’s a pair of plain black cans with no shiny accents and minimal decals (the Razer logo appears on either side, but it’s extremely subtle). My first reaction upon unboxing was “Thank goodness”. It’s just nice to have a good gaming headset that I could wear in public without drawing attention to myself.

It’s a comfortable fit, with exceptionally soft oblong ear cups. Although it’s a relatively loose fit too, at least on my head. If I nod my head forward, I notice that the headband slides over the top of my head quite easily. In comparison, the Razer Kaira Pro is more fitted with firmer cups and it doesn’t move as much. Just beware if you are a headbanger.

The headphones also come with a compact carrying case, which is a nice touch. It includes a small compartment that holds its various dongles and wires. This presentation helps make the Barracuda Pro feel more like a premium product than a premium toy for gamers. They’re not something you want to randomly throw on your desk after you’ve finished wearing them.

At this point, Razer knows how to make a gaming headset, so it’s no surprise that audio quality is a strong point. In my testing, I found the audio mix to be fairly balanced across a range of games thanks to the powerful 50mm bio-cellulose drivers. Most notable is its lower range, which allows it to produce punchy bass quite well. That’s key, because the Barracuda Pro isn’t just a gaming headset. With its lifestyle design, Razer hopes you’ll use it for other purposes too, like listening to music. This balanced default sound profile helps make it more effective as a jack-of-all-trades, even if it doesn’t excel in any specific category.

I found it struggled a bit with mid-range tones. Playing Xenoblade Chronicles 3, which features chaotic battles filled with clashing attack tones, I could feel the sound peaking a bit. This is an extreme example (I’m not convinced XenolameBattles sounds great on any headset), but I found it a little hard to listen to in this setting.

Luckily, you can tweak the EQ using the Razer Audio app, which I recommend you do. The app also lets you adjust mic noise cancellation, enable do not disturb mode, and more. It’s a nice companion app, though personally I would have liked to see some sound profile options on the headset itself to make some quick tweaks when the mix gets rough.

A nice built-in customization option provided by the Barracuda Pro is hybrid noise cancellation. With the push of a button, I can easily turn active noise cancellation on or off. I can also activate Ambient mode, allowing for some outside noise if I want to be aware of my surroundings – again, a useful addition for those who want to use their headphones for more than gaming. I can absolutely hear the difference between each mode as I cycle through the options, with the ANC suppressing a fair amount of background noise. However, some ambient noise persists even with ANC on, so don’t expect a perfectly isolated experience.

Your voice will sound like it’s coming from the answering machine of an old landline phone.

There is one area where the audio quality is sorely lacking. As part of its sleek design, the Barracuda Pro doesn’t feature a detachable boom microphone like most gaming headsets. Instead, it opts for an in-line one, which creates a key decision for buyers. . The lack of a front-hanging microphone allows it to maintain that lifestyle, but at the expense of sound quality. Your voice will sound like it’s coming from the answering machine of an old landline phone. It’s a harsh digital quality that’s not exactly ideal for team communication. As a result, the Barracuda Pro is probably best suited for solo gamers.

The Barracuda Pro has some neat tricks up its sleeve when it comes to connectivity, although a noticeable blind spot too. Its most impressive feature is its dual Smartswitch wireless connection. This allows the headphones to be connected to one device via Bluetooth and connected to another, at the same time, via 2.4 GHz. For example, I connected my headset to my Steam Deck via Bluetooth, but simultaneously connected to my PS5 using the USB-C dongle that came with the headset. With a quick double press of a button, I could switch between the two systems effortlessly.

The Barracuda Pro can connect to a wide range of out-of-the-box devices.

I ran into a slight issue with this setup when I unplugged the dongle from my PS5 while connected to it. After that, I found that I couldn’t get back to my Steam Deck audio unless I disconnected and reconnected. Also, I ran into the same issue when I accidentally switched to 2.4GHz mode (without the dongle plugged into anything) while connected to Bluetooth. I don’t think these are use cases that many users will really encounter, but the process is a bit complicated. Other than that, the Smartswitch technology works quite well and allows me to easily answer a phone call while playing a game without taking off my headset.

Thanks to its hybrid approach, the Barracuda Pro can connect to a wide range of out-of-the-box devices. I could connect it to my Nintendo Switch, PS5, Steam Deck and iPhone without difficulty. The Xbox is the odd one out, as the Series X doesn’t have native Bluetooth support or a USB-C port (as a general rule, I’m always opposed to USB-C dongles, as the port isn’t enough common not yet universal). That makes it a bit incomplete as the perfect gaming headset, although there are workarounds.

Note that the Bluetooth option has latency issues. In my testing, I noticed noticeable audio lag when playing on Switch, as the sound of switch cycle mention options in games did not line up properly. For a lag-free connection, 2.4 GHz is a safer bet.

Razer notes that the Barracuda Pro lasts around 40 hours, and that keeps up with my testing. Naturally, there are variables back and forth, but I found I could go through a long gaming session without having to worry about my headset dying. The headset also automatically turns off when not in use, saving battery power.

I encountered two sore spots when it came to the battery. It’s just a little disappointing that there isn’t a corded option for the Barracuda Pro. Although it includes a USB-A to USB-C charging cable, you still need to go wireless no matter what. Far more annoying is the headset’s low battery indicator, which constantly gives a voice warning – sometimes for hours on end due to battery life. It’s the same inconvenience I had with my Razer Kaira Pro and I’m shocked that it ends up in this more “high-end” model.

If I seem to nitpick a lot of these points, it’s for a good reason: they’re $250. At a higher price point like this, I don’t just want a headset to look like a premium product. A few missing touches here and there add up, which clearly shows that Razer isn’t quite ready to fight Bose or Sony as a lifestyle brand. This is first and foremost a gaming headset; it’s just one you can wear outside without batting an eyelid if you need to.

The Razer BarracudaPro is a good all-around headset for gamers who can’t stand the noisy design of most gaming accessories. Its low-profile design, long battery life, and balanced sound make it a solid option whether you want to play home or listening to music on an airplane. However, its hefty $250 price point highlights some of its issues more than they would. Issues like its weak built-in microphone make me feel like the high cost is more about maintaining the illusion of a gaming headset that’s become a prestige lifestyle product.

For a solid gaming headset with an understated design, the Corsair Virtuoso RGB Wireless is comparably priced and has a better microphone. For a comparable lifestyle headset, check out the Jabra Elite 85H.

The battery can last up to 40 hours on a charge, meaning it will last through any marathon gaming session. The build quality itself is solid, and its carrying case should protect it from long-term damage.

Yes. If you just want a less embarrassing gaming headset, this is a pretty good option. Prepare for some oddities.