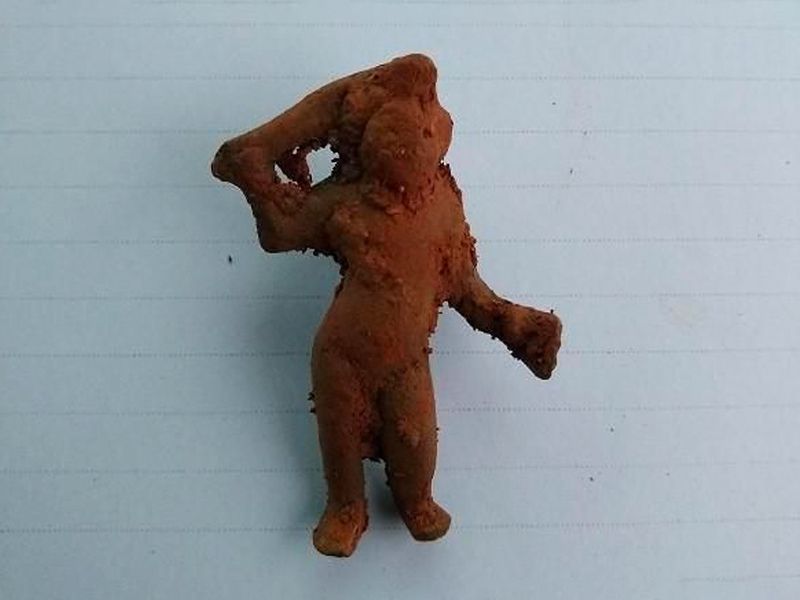 Archaeologists in England are loved up after unearthing an approx 2,000 year old Roman figurine of Cupid.

Valentine’s Day month has seen the discovery of a romantic icon. Made from bronze, sporting wings and bearing a torch, this rare figurine isn’t looking its best. But it represents a sacred offering, thought to have been left at a temple by the Roman roadside.

Nowadays the land, located between Gloucester and Swindon, is a privately-owned field. History hunters creating trenches along a 3.4 mile stretch found the piece, outside the village of Birdlip, Gloucestershire.

They’re doing exploratory work before the area is turned into a bypass by Highways England.

The $600 million plus project, named “A417 Missing Link”, has uncovered various treasures, of which Cupid is the most eye-catching. “If we’re correct, it could date back to as early as the 3rd Century before the Roman Empire became Christian” states a press release via the UK Government website. Experts consulted records of the time before setting out for the geophysical part of the work. 335 trenches were dug over 4 months, according to Highways England.  As the local Gazette puts it, the land was well-used during the Later Iron Age and Romano-British periods.

A roadside place of worship may sound like something from modern times, but such sites are also associated with the era. As the Roman god of love, it makes sense a Cupid or two would be left here. Eros is Cupid’s Greek equivalent.

The figurine being found in a charcoal deposit is another indicator of religious significance, as reported by BBC News and other outlets.

It’s an unusual item, one of under 50 to be discovered in the UK. Furthermore, it was found without the use of a metal detector, making it even rarer.

21st century building crews are inevitably moving in. But this find shows how the past often makes its presence felt, before layers of concrete seal it off forever. As a former Roman road the area is bound to contain forgotten artefacts, some of which will never see the light of day. On a larger scale, the remains of ancient settlements have met the archaeologist’s tools. A brooch also discovered at the same settlement has given an insight into daily life as a Roman.. Credit: Highways England

Two things that have been revealed near Birdlip are a brooch shaped like an archer’s bow… and a skeleton!

The former is believed to have made a stylish, if expensive, fastener for a cloak. As for the latter, it’s a bit of a mystery. The skeleton was buried with a north-south orientation. Smithsonian Magazine highlights the east-west tradition employed by Christians – from this it could be speculated the individual is pre-4th century Roman or a 5th – 7th century Saxon.

Most interestingly, the skeleton is face down. Smithsonian Magazine writes this “might have been a sign of disrespect for a criminal or someone otherwise disliked by their local community.” Quoted in the Highways England press release is Senior Project Manager Michael Goddard. He said it is “fascinating to see that Romans would have lived in the area in a similar way to how we do today”.

The release refers to other examples of ancient history being unearthed by roadworks. When the A1 was being improved in North Yorkshire, experts spotted evidence suggesting an earlier arrival for the Roman Army.

One of the industrious things the Romans did was try and mend potholes! They may have driven carts instead of cars, but the effects of a pothole were surely the same.

By the ancient site of Stonehenge, a vessel was recovered that could be 5,000 years old. Inside were housed cremated remains. Something called a hengiform monument has also been found. This can be known as a mini-henge.

Brewery work and even mammoth tusks are just a selection of items recovered from the ground across the country. The mysterious skeleton from Gloucestershire however has been laid to rest and won’t be disturbed any further.

Originally announced on the 12th, the bronze Cupid is an apt artefact for early February. It whispers more than sweet nothings about life in England’s turbulent past…