Have you ever been UNINVITED to something?

Anyway, enough about me: check out this story from the “Am I the A**hole?” page on Reddit and decide if you think this person went overboard.

“So it’s only 2 weeks before the wedding and my fiancé’s brother’s (let’s call him John M21) new girlfriend (let’s call her betty F18) caused a lot of drama at the bridal shower this past weekend.

This has been an ongoing problem since they started dating. They got a promise ring shortly after dating which I have no problem with at all, but at the bridal shower she used it to brag a lot and kept making comments such as calling my fiancé’s mom her mother in law and she said to me I’d soon be part of the family as though she is already married to John.

She also spread a rumour about one of the nicest ladies at the bridal shower (my neighbour) saying she had flirted with Betty’s father (not FIL, her real father), which was merely impossible as she is married and is one of the most kind hearted people I know and has never met Betty (we asked the neighbour if she was indeed at the pub where Betty works at the previous night where Betty claimed it happened and the neighbour said no she was at home).

A lot more went down and after Betty was extremely rude to my Maid of Honour I had to go up to her and ask her to stop being rude to my guests and to please stop gossiping. Shortly thereafter a lady on their table came up to me and asked to sit with me as she couldn’t stand the bad mouthing by Betty at the table.

My MOH then took it upon herself to uninvite Betty as she caused a lot of problems and generally just took away from one of the special moments in my life, after she sent her a message Betty simply ignored it. My MOH then told me about this and I decided that she was right as it is her duty to make the wedding run smoothly and as this has happened so many times before.

My Fiancé’s father thinks I’m tearing the family apart for uninviting her, even after I said that John was still to come as a groomsman and as my fiancé’s brother. My fiancé’s dad and brother have decided that if Betty is not invited they would not attend either.

I’m honestly stuck as to what to do, my fiancé feels that if his family chooses John’s new girlfriend over his wedding then they don’t care about him enough, it hurts to be in this situation.

We want our wedding to run smoothly and drama free and Betty might not make this possible, so AITA for uninviting Betty?”

Now check out what Reddit users said about this.

This reader said they’re NTA and this is supposed to be their special day. 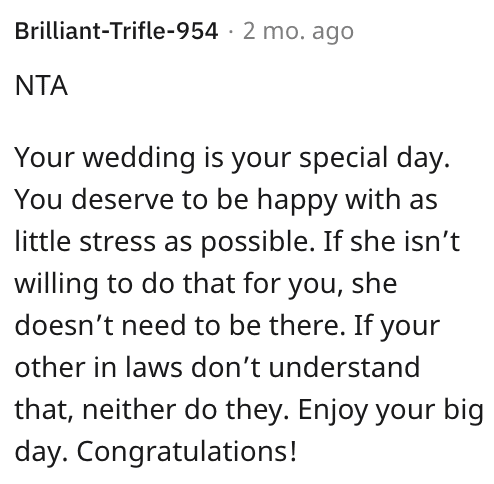 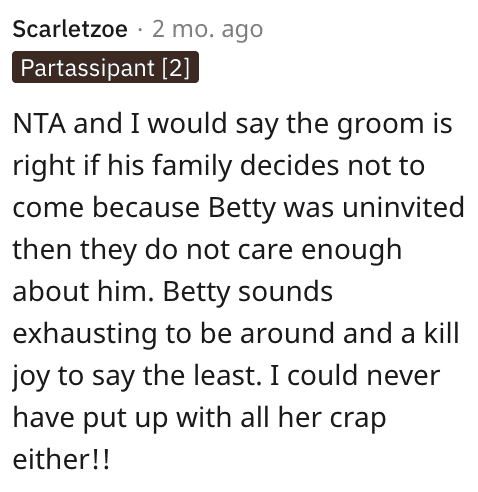 And this individual said dump the problem now so you don’t have to deal with it later. 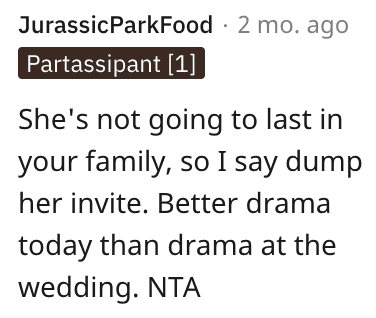