We’re you a Ding Dong Ditcher when you were a kid?

For those of you who don’t know what I’m talking about, it’s when you ring someone’s doorbell and run like hell…and most kids I knew growing up were considered experts at doing it.

But now we’re gonna hear a story from the flip side of the coin: AN ADULT.

Read this story and see if you think this person was out of line for what they did to a Ding Dong Ditcher.

“Due to job opportunities, we recently moved into a new neighborhood.

While most things were going fairly smoothly, we’d at around 4pm hear a couple of knocks on our door, when we went to see who it was, to our surprise there wasn’t anybody there.

It was only until a couple weeks later that we thought there could be the possibility of someone doing ding dong ditch. We just never thought of it as everyone here seemed really relaxed, so ding dong ditch never crossed our minds.

As to not resort to any extreme measures, we put up a sign near the door saying to “please not trouble the peope inside by doing these silly pranks”, which didn’t work. Since it didn’t work, we resorted to asking people about it, but all i got was that it was some sort of tradition for kids in the neighborhood to do this to the new people in the area.

This kind of irked me as ding dong ditch is really annoying so i set up a camera inside our house to capture who was outside our door.

After reviewing the footage multiple times i was able to confirm it was some brat who was a couple metres away. I went to speak to his parents but they laughed it off saying kids will be kids, so i decided that I’d myself do something about it. After 3 days the kid came back, but i was hiding behind an unlocked door with a large water bucket. As soon as he knocked and turned i opened the door and splashed him with water.

I thought that was that but, the kids parents came not even 10 mins later, demanding as to why i soaked their kid in water, i tried to justify my reasoning but to no avail.

Im conflicted/feel like an AH as i myself used a petty way of getting that kid to stop annoying us.

I would love to hear your opinions on this as well.

Now it’s time to see what Reddit users said about this.

One person said they’re NTA and that these parents didn’t do anything this when they could have. 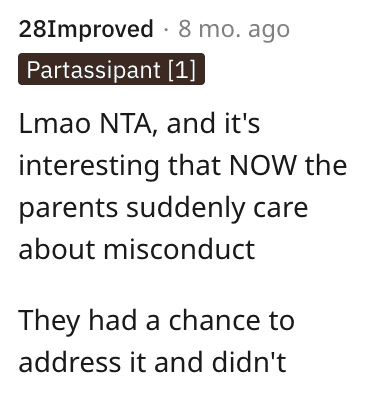 Another Reddit user said they’re NTA and they should record events just in case the kids’ families decide to get ridiculous. 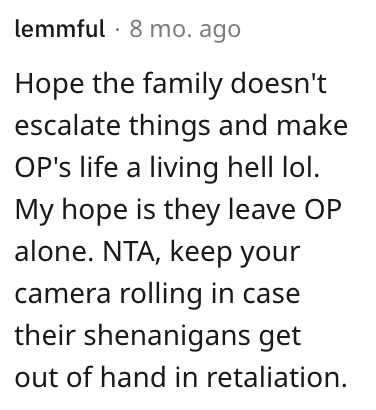 And this individual said they’re NTA and that these kids got off pretty light. 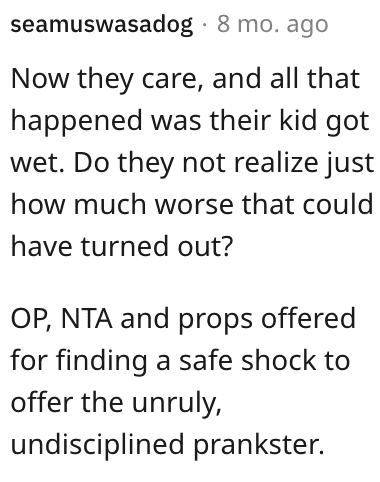 Let us know what you think about this story in the comments.