I’ve never met a dog with an offensive name but I suppose there’s a first time for everything, right?

And this person wants to know if they’re acting like an a**hole for not changing their dog’s name that someone is not thrilled about.

Take a look at what happened!

“I have several dogs, one of which is an American Akita. His name is Yankee. I thought it was funny, and he seems to like his name.

My sister was in the states the past two years and recently flew home with her boyfriend in tow. First time we’ve met him, yada yada.

I guess she never mentioned me or my dogs, but he was pretty surprised when I told him my dogs name. I didnt think much of it – most of my pets have peculiar names so I assumed it was just an overall reaction.

They left, my partner and I had dinner. Part way through our food my sister called and asked if I’d consider changing my dogs name. I kind of thought she was kidding, but she reiterated that she was serious.

The name yankee had upset her boyfriend, quite badly, and he found it offensive. I basically told her to f**k off and tell him to grow up, before going back to my food.

The following day they literally show up at my door. I was kind of taken aback – apparently they came to tell me why the name yankee was so awful.

During this discussion he told me it was essentially a slur used against Americans, and asked if I would ever name a dog the n word. I just kind of laughed and told him he was off his nut. Its not that serious. You cant equate the word yankee to something like the n-word.

I told him I wasnt going to change my dogs name – he knows it, it’d be a s**t ton of work. He’s personal protection so it could even damage his work.

They, thankfully, left, but still seemed pretty upset. Thinkinh back now I’m pretty sure theres a company with yankee in the name? I wonder how many letters of complaint he’s sent.

Anyway, I did message my American friends just to make sure I wasnt being a p**ck. They all agreed he was being stupid, but I know the US is huge and it might be more of a regional thing? So I’m still not sure. I am starting to feel kind of a**hole-ish for not taking him seriously when it may be a genuine issue for him.

So, I come to reddit. Two birds, one stone, I know a large amount of Americans frequent this subreddit. Am I am a**hole, and is this an issue in the states that I should apologise for?”

Take a look at what Reddit users had to say about this.

This reader said they’re NTA and made a pretty hilarious comment about this whole thing. 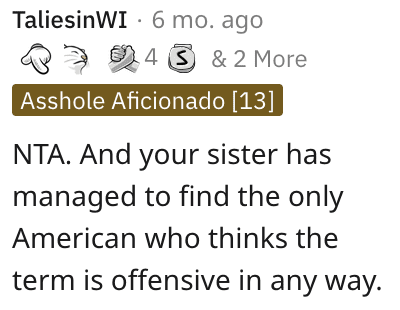 And another person agreed and said their sister’s boyfriend sounds like a real jerk. 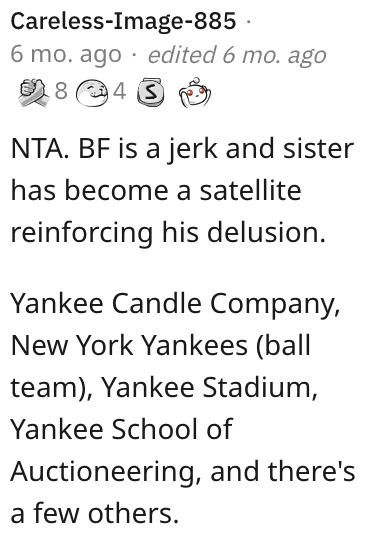 And this individual put this whole thing into perspective. 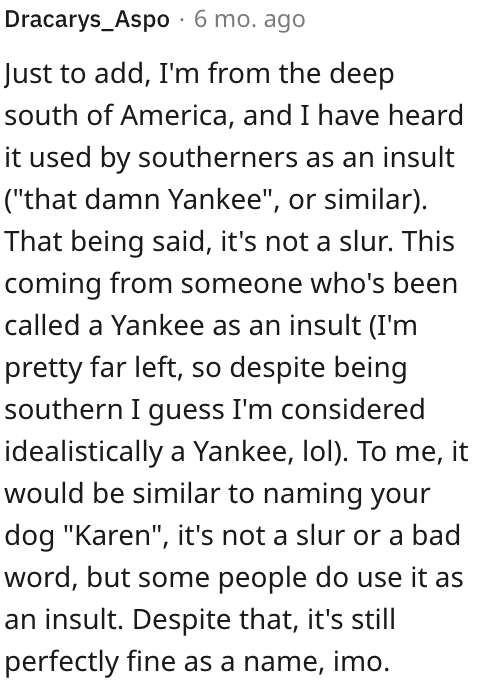 What are your thoughts about this?

Tell us what you think in the comments.

12 People Get Real About What They Find Incredibly Annoying