I know whose side I’m on in this story!

Can we give the invasive social media videos a break, please?

Take a look at this story from the “Am I the A**hole?” page on Reddit and see if you think this person was out of line.

“This is becoming more and more common at the surrounding gyms, which is really annoying and a reason I’ve changed gyms more than once this year alone. Working out is a pillar of my everyday life, and it has been for the past ten years, and I’m at the gym every day of the week.

Now, I don’t go to the gym to talk to people, make friends or make funny videos. I go to train and go home. However, now with the new video trends, many folks want to record their exercises to post on social media. This is their business and not mine, they can do whatever they want, but I also don’t think I need to stop doing my own work-out to accommodate them.

Last night, I was doing squats on the smith machine. I work out with head-phones and didn’t notice someone trying to get my attention. I suddenly felt a tap on my shoulder mid-squat, and only then I noticed a woman with a very annoyed expression.

She barely allowed me to finish the movement to start talking, which was muffled due to headphones. Long story short, she was annoyed because I was training in the smith machine, as she wanted to record herself doing regular squats. However, she said the best spot was in front of that smith machine (there’s more than one), and she didn’t want me on the frame, so she wanted me to stop my series for her to record.

Now, usually, if someone comes to me with a good attitude and asks if it’s ok for me to stop for a series or two for them to record or even move machines, I would absolutely not mind and comply. That woman did nothing of the sort, being extremely arrogant and honestly, extremely annoying.

So, I was petty, and told her to record once I was done, and proceeded to do every single exercise I could on the same smith machine. Squats? Smith. Hip Thrust? Smith. It was petty, and I know I shouldn’t have done it. But I felt very vindicated, seeing her annoying expression.

That being said, a few people said I was an a**hole for doing that, as there were other machines I could use. Honestly, they might be right, but hey, I thought I’d ask the internet, was I too much of an a**hole here?”

This reader said this person is NTA…and you shouldn’t interrupt someone mid-squat. 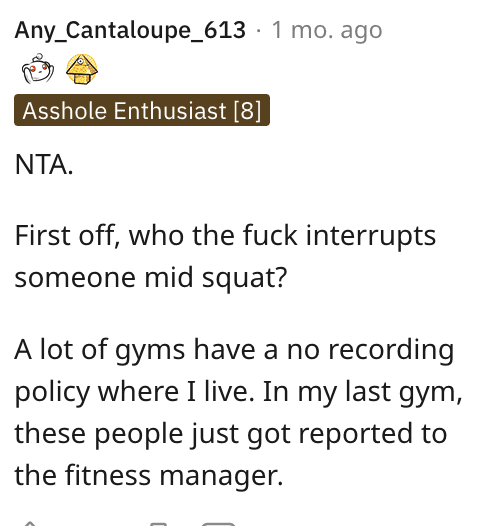 Another person agreed and said this woman should get a home gym if she wants to make videos like this. 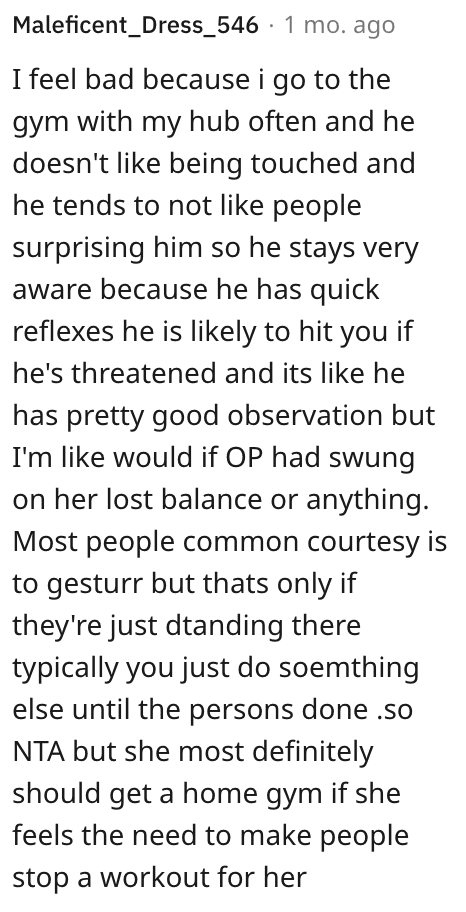 And this individual said no recording at all is a good policy for gyms. 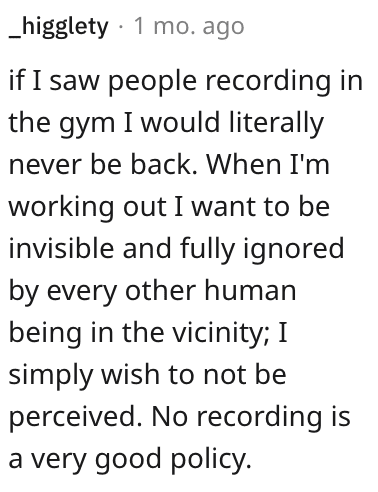