You know at least a few people are going to be offended when a couple decides to elope.

It could be some parents, some grandparents, and all kinds of other folks.

And the person you’re about to hear from really wants to know if they acted like an a**hole when they helped their sister.

“This situation is a bit of a mess, so please bear with me

Some background to help understand the family dynamic: my (22) parents aren’t understanding people. Dad (57) is significantly worse – he thinks his way is the correct way and we always need to learn from him. He’s very, very close to his siblings especially my uncle ‘Peter’ (60), and always likes to take their opinions.

I have a sister ‘Laura’ (28), she’s amazing, but kind of soft and gets emotional pretty easy – growing up my parents were manipulative and borderline emotionally abusive towards her. And I think she also tried to “shelter” me in a way, so my experiences growing up were quite different from hers.

I thought she was just a drama queen and didn’t realize until I got older. I’d say mom’s changed and tries to be supportive now, but dad’s still good old dad. Me and Laura are close but she’s not as close to our parents especially dad, but she still talks to them.

My grams, dad’s mom gave me a ring as a gift for my 18th, which granddad had gifted her a long time back. It’s not worth a lot, but definitely a special piece.

Okay now to the issue at hand. A couple years back Laura went on a date or two with a guy ‘Harry’ (30 I think), but nothing came of it. Fast forward to now, it turns out this guy Harry is from a very “upper class” family and uncle Peter is friends with his dad. I guess at one point Harry mentioned to him that he went on a date with Laura and Peter (and his wife) pretty much lost their mind, trying to get them back together and other s**t.

Laura’s been with ‘Jack’ (34) for over a year now and they’re serious. Dad of course sat Laura down to convincing her that Harry is the one. (also a side note, it’s not like Jack is unemployed or some s**t, he’s an attorney and has a good background). I know there was a massive argument between all of them after Laura found out dad had literally gone to Jack and told him to leave her. Jack brought up the idea of eloping, I encouraged it and Laura agreed.

Me and a few others from Jack’s side helped them set up everything and get a marriage license. I gave Laura grams’ ring as a ‘happy elopement’ gift. I did tell mom vague details on what was going on, but dad and Peter and co found out a few days ago. It’s been a clusterf**k since then, apparently uncle Peter’s embarrassed and doesn’t have face in front of Harry and his family.

Dad’s upset at me for helping them, but more so because I gave grams’ special ring for a something like this. He said one of us could’ve at least told them beforehand and not created this situation now. I won’t even get started on what’s going on within the extended family.

Was I the a** for helping them elope and also giving grams’ ring away? Some people are saying I shouldn’t have brought myself into Laura’s drama, and my aunt actually said giving the ring away was the same as stealing it.”

This person said they’re NTA and that they did the right thing. 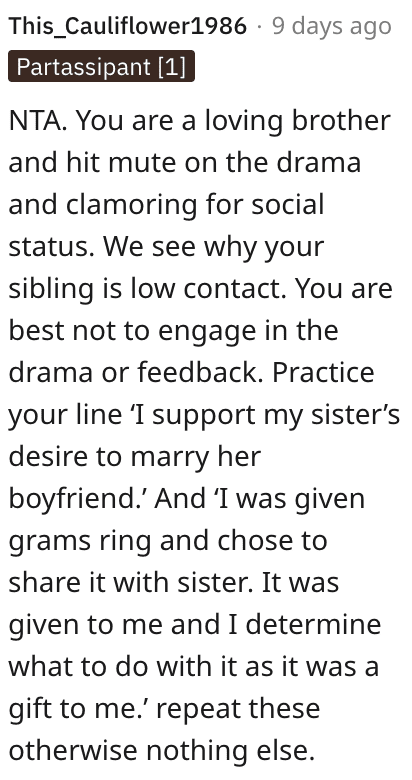 And this individual said they could do whatever they wanted with the ring since it was given to them. 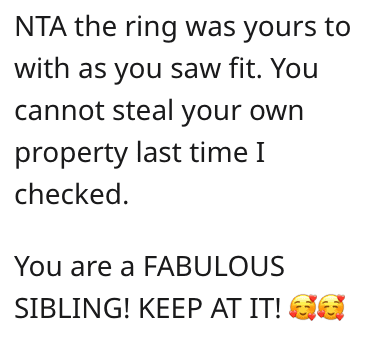 And this Reddit user also said they are NTA and that the heirloom is staying in the family, so what’s the big deal? 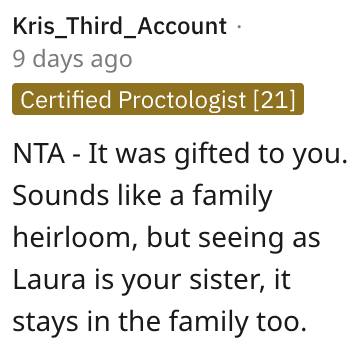