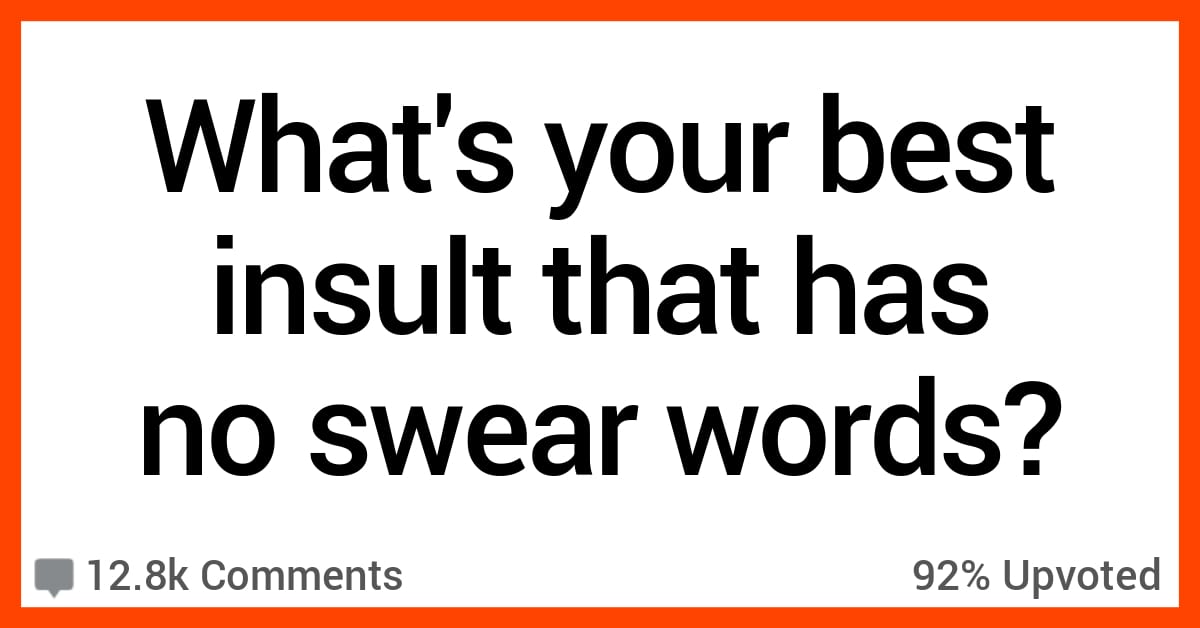 You gotta be smart and pretty clever to make something feel like an idiot without using all kinds of curse words.

Sure, anyone can say f*ck, sh*t, and *sshole until the cows come home, but sometimes it just feels a little stale.

Feel free to use some of these next time you need to put someone in their place!

“In a world full of soup you would eat with a fork.”

“I feel bad for the person that had to wait nine months for a kid and it was you.”

“A fun one for the Holidays:

“You are one of those people who would be enormously improved by death.”

“Mister Rogers would be disappointed with you.

Even Bob Ross would think you’re a mistake.”

“Your birth certificate is an apology letter from the condom factory.”

“I don’t have the patience or the crayons to explain this to you.”

This one is so underrated.

Having moved rom the north to the south I had no idea it was an insult until I lived there a couple years.”

“He has the agility of road kill.

Sharp as a pancake.

As smart as cat litter.

Couldn’t hold a conversation if it was in a paper bag.

You have the skills of a rock.”

“When you were born, your parents threw away baby and raised the placenta instead.”

“Working in a bar, people used to ask how my day was. Normally I’d respond with “just living the dream!” Somewhat sarcastically.

One day dude comes in and looks at me dead pan and says “dream bigger”. And just goes back to his menu.

Not gonna lie hurt a bit.”

“Out to lunch with co-workers, the conversation turned to marriage.

“If we were married, I’d kill you”, said the office manager to me.

“If we were married I would kill myself.”, was my reply.”

“Out of all the people I’ve ever met, you are definitely one of them.”

“If you were any smarter you’d be stupid.

I heard my dad say this once like 30 years ago and it’s been my favorite ever since.”

Actual conversation with a former supervisor. I was the one who said no.”

““Thank you for showing me what not to do in my life.”

“You are a waste of good oxygen.”

“Isn’t it dangerous to use your entire vocabulary in one sentence?”

“Some kids were dropped on their heads as babies.

You must a have been thrown against a wall.”

“When someone is single and they say something like, “I’m single by choice!”, just say “yeah, just not YOUR choice.””

In the comments, share your best “clean” insults that don’t enjoy swearing.

Let’s see what you got!