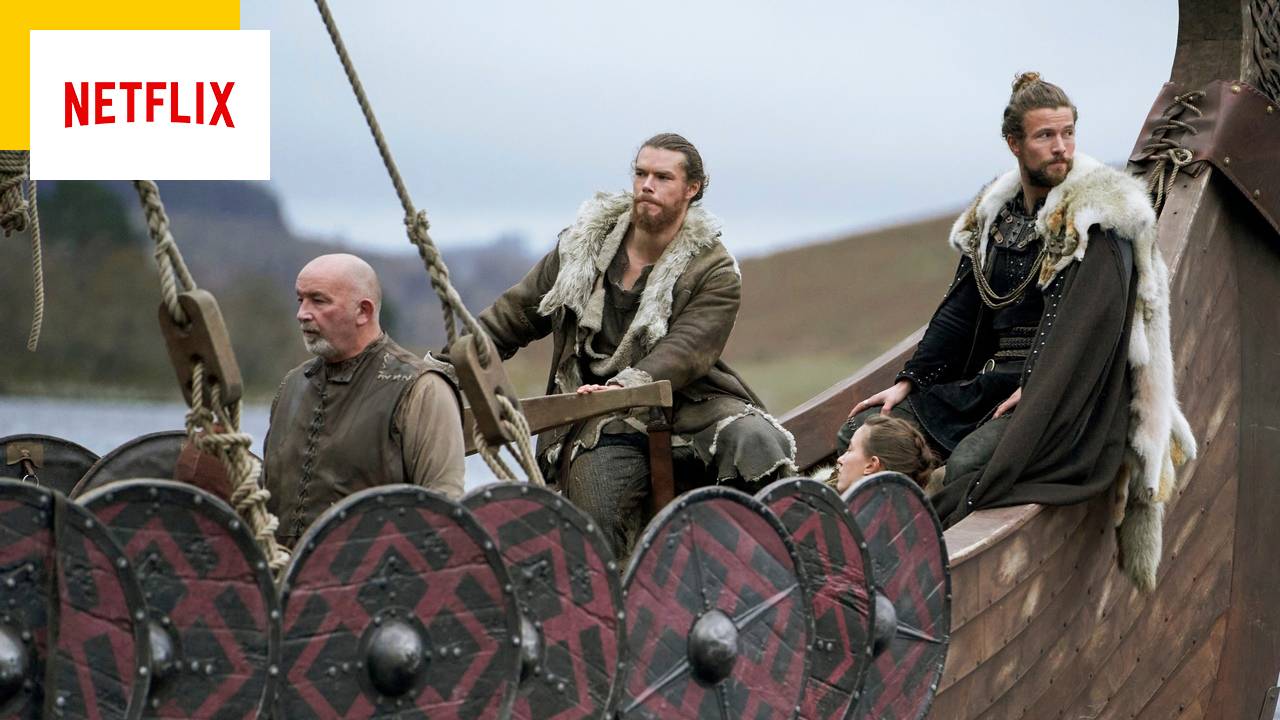 Discover thanks to AlloCiné the films and series that will be released on Netflix between February 25 and March 3!

Vikings: Valhalla: The return of the Vikings has finally arrived! A little over a year after the conclusion of Vikings, its spin-off arrives on Netflix, still produced by Michael Hirst. Exit Ragnar, Lagertha or Bjorn, make way for their descendants.

Vikings: Valhalla is set 150 years after the parent series and will follow the epic adventures of legendary new heroes: explorer Leif Eriksson (Sam Corlett), his fiery sister Freydis Eriksdotter (Frida Gustavsson) and the ambitious Prince of the North Harald Sigurdsson ( Leo Suter). Men and women ready to do anything to survive in a changing Europe.

Tirelessly : While under investigation for corruption, a lieutenant played by Franck Gastambide, who is abandoning comedy for the occasion, accidentally kills a man in a road accident. Panicked, he decides to hide the body. But he finds himself embarked on a downward spiral, when the investigation into the missing individual is entrusted to one of his colleagues, and a mysterious witness tries to blackmail him.

Madea: Back with a bang: Tyler Perry once again finds his flagship character Madea. In this twelfth film devoted to the African-American grandmother, the heroine welcomes her family to celebrate the graduation of her great-grandson. But hidden secrets could well destroy the reunion…

Twice 15 years: In the same vein as the comedy Camille redoubles by and with Noémie Lvovsky, this Brazilian series tells the fate of Anita, a thirty-something who does not have the life she dreamed of and who involuntarily teleports 15 years back. She begins by getting involved in each other’s stories before understanding that the only life to correct is her own.

Juvenile Justice: As All Of Us Are Dead continues to squat the top 10 viewership, another Korean series is coming to Netflix, this time in the area of ​​justice. Judge Eun-seok (Kim Hye-Soo) has nothing but contempt for juvenile delinquents before realizing the social difficulties they face, and the responsibility of society in their drift.

My Wonderful Life: In this Polish romantic comedy, a woman receives a blackmail threatening to reveal her affair. Then follows a series of events that serves as group therapy for his entire family.

The Guardians of Justice: Dark and provocative satire of the superhero genre, this series whose first season includes 7 episodes mixes animation and live action and is not to be put in front of everyone’s eyes. The story of Marvelous Man, Knight Hawk and The Speed ​​is not recommended for ages 18 and under.

A lease in hell: A new documentary series that tells four terrifying stories around roommates that turn into a real nightmare! Violent crooks, merciless killers… you never know who may be hiding down the hall.

The Very Private Life of Mr. Sim (catalogue): Find the late Jean-Pierre Bacri in this film where he portrays a man left by his wife and without a job, who receives an unexpected proposal: crossing France to sell toothbrushes which will “revolutionize oral hygiene”.

The Bear and Two Brothers (catalog): Two films by Jean-Jacques Annaud join the catalog at the beginning of March: the mythical L’Ours in which an orphan cub learns life alongside a solitary bear and Deux frères, about two tiger brothers separated at birth who know very different destinies. different.

Baywatch (catalog): The film adaptation of the famous series that made Pamela Anderson a star, this time with Dwayne Johnson in the skin of Mitch Buchannon and Zac Efron in that of Matt Brody.

A family in the ring (catalog): Inspired by the life of British wrestler Saraya Bevis, played on screen by Florence Pugh, this family film realistically depicts the world of wrestling. A certain Dwayne Johnson even plays his own role.

LOL (Laughing Out Loud) (catalog): After having played the rebellious teenager in La Boum, Sophie Marceau is this time the mother of Lola, a teenager who is looking for herself, interpreted by Christa Théret. With one of Pierre Niney’s first appearances in the cinema.

The penalty area (catalogue): Best known for his comic roles, Franck Gastambide for the first time held the headliner of a drama with this film in which he plays a man living on the fringes of a provincial football club. Without status or salary, he knows the players well and nurtures them as much as he watches them.

Ted 2 (catalog): The second adventure of rude teddy bear Ted, who along with his friend John (Mark Wahlberg) tries to legalize his existence!

Queen Margot (catalog): Forced to accept an arranged marriage with a Protestant king to bring peace, Margot falls in love with another man and triggers tragic events. Cult film by Patrice Chéreau with Isabelle Adjani and Daniel Auteuil.

Quai d’Orsay (catalog): Adapted from the comic book of the same name by Bertrand Tavernier, this film features Thierry Lhermitte in the shoes of a minister inspired by Dominique de Villepin who hires a young ENA graduate (Raphaël Personnaz) as responsible for “language ”. The latter strives to make sense of the political insanities of his boss.

Lost in the arctic: This is the first Icelandic feature film on the platform whose screenplay was co-written by its main actor, Nikolaj Coster-Waldau (Jaime Lannister in Game of Thrones). This adventure film inspired by a true story recounts the Danish expedition led in 1909 with the aim of disproving the belonging of northeast Greenland to the United States.

Ritmo salvaje: Two polar opposite Colombian dancers face off on and off the dance floor, driven by a will to succeed that leads them down a dangerous path in eight episodes that will make you want to wiggle your hips.

The Pirates: The Royal Treasure is Ours! : After its huge success at the Korean box office, this adventure film arrives on Netflix and takes viewers along with a crew of pirates and bandits who, in the Joseon era, brave the turbulent waters and try to decipher clues. to find the royal gold before his rivals.

Midnight at Pera Palace: This Turkish series inspired by the eponymous novel by Charles King tells how, while visiting a historic hotel in Istanbul, a journalist is sent to the past and must prevent a plot that could change the destiny of modern Turkey!

The Weekend Away: Gossip Girl star Leighton Meester stars in this thriller as a woman whose best friend disappears on a trip to Croatia. She then does everything to elucidate this mystery but each clue leads her to a new disillusion.

Surviving in Paradise: A Family Story: A documentary narrated by Regé-Jean Page (Bridgerton) on the lengthening of the dry season which threatens the future of elephants, lions, wolves and other species that inhabit the Okavango delta, in the Kalahari desert.

Musclor and the Masters of the Universe, season 2: Before arriving in the cinema in a live-action version, Musclor returns in a season 2 of his animated series where Eternos holds his breath while the heroes seal new alliances and destiny to hinder Skeletor in his quest for power.

Mary Stuart, Queen of Scots (catalog): Carried by Saoirse Ronan and Margot Robbie, this historical drama tells how the young Queen Mary returns to her native Scotland to reign and dispute the crown of England with her cousin, Queen Elizabeth I.