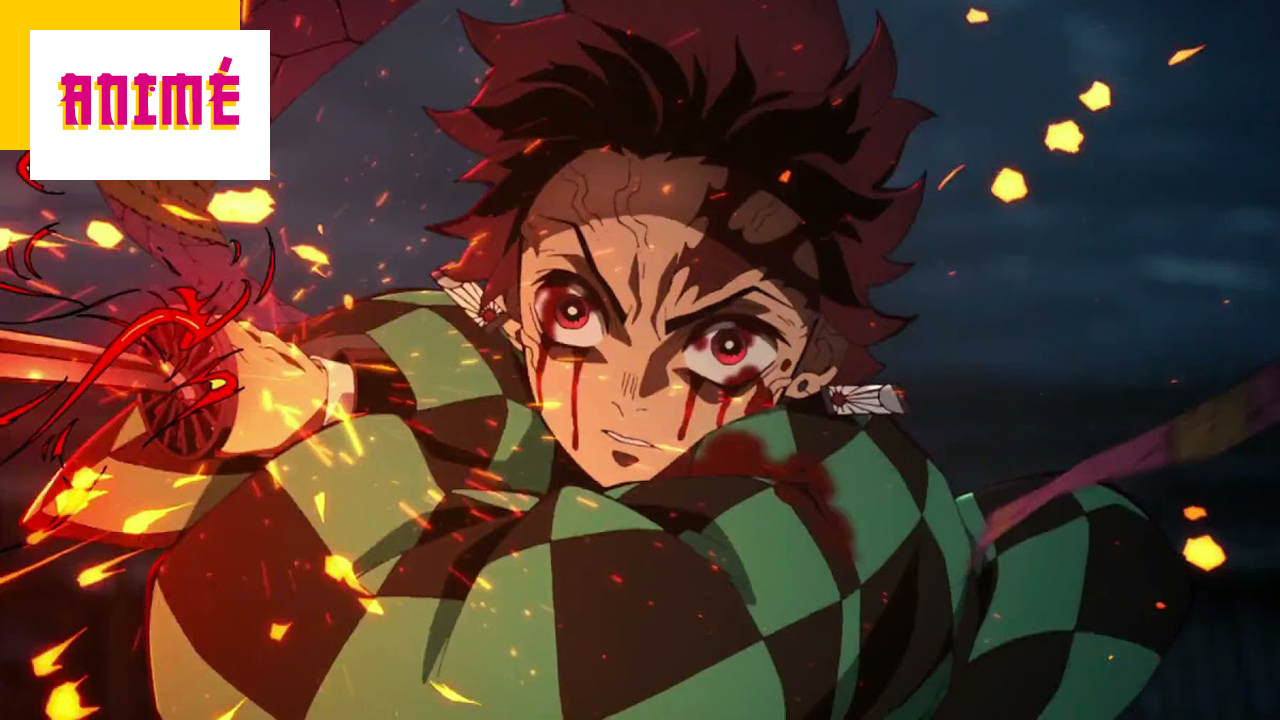 This month, we’re talking pleasure district, knights of the zodiac, dangerous game, teenage romance and swimming competition in our 5 anime recommendations to discover on your specialized platforms.

Since ancient times, there have been rumors of man-eating demons lurking in the woods. For this reason, local townspeople never venture there at night. Legend also has it that a killer wanders around at night, hunting these bloodthirsty demons. Since his father’s death, Tanjiro has taken it upon himself to provide for his family.

Despite this tragedy, they manage to find a little happiness on a daily basis. However, this bit of happiness finds itself destroyed the day Tanjiro discovers that his family has been slaughtered and the sole survivor, his sister Nezuko, has become a demon.

Much to her surprise, Nezuko still shows signs of human emotion and thoughts. Thus begins the hard task of Tanjiro, that of fighting the demons and making his sister human again.

If you have never watched an episode of Demon Slayer, it’s really time to get started! Moreover, after the success in the cinema of the film The Infinity Train (700,000 admissions in France), the series has set the bar even higher with a season 2 of exceptional quality!

Entitled Le Quartier des Plaisirs, this second season stunned fans with its fabulous animation, spectacular action scenes and epic and touching narrative. In addition, the VF has just landed on Crunchyroll! No excuse not to delve into what is arguably the best anime of the past decade with The attack of the Titans.

According to legend, young warriors invested with great powers were in charge of protecting Athena, the Goddess of War. Years later, it is now Princess Saori Kido, reincarnation of the Goddess, who must receive protection.

One hundred young orphans are then sent around the world to undergo a grueling training as sacred knights. Once these tests have passed, they receive celestial armor placing them each under the protection of a constellation. But the battles have only just begun…

At last ! After years of waiting, the cult series The Knights of the Zodiac (Saint Seiya), who made the heyday of Club Dorothée, finally landed on a platform, in this case ADN. For the most nostalgic, it’s an opportunity to immerse themselves in this absolutely heroic and fantastic story, not devoid of a subtle poetry.

As for the new generation, they will finally be able to discover this pillar of Japanese animation, a monument of Japanese culture. From the manga created by Masami Kurumada, Saint Seiya has had a considerable influence on modern shônen. The first part of the animated series (episodes 1 to 73) is available now exclusively on ADN; the second part (episodes 74 to 114) will be online from May 11th.

High school student Yuichi Katagiri lives alone and struggles to make ends meet. Despite his financial problems, he keeps his spirits up thanks to his four best friends who support him in all circumstances. However, when money for a school trip is stolen by someone in their class, all suspicion falls on him.

Hours after the robbery, he and his friends find themselves embroiled in a game in which they must pay off a huge debt. No doubt, the thief is among them… Yet the only way to win this game is to never doubt your loved ones. So will they trust each other or betray each other?

You loved Squid Game and you want more? This April novelty is made for you! Between revisited poker, deadly hide-and-seek and vicious werewolf games, in this twisted game that is Tomodachi Game, you can settle your debts quickly and effortlessly, as long as you know how to make the right choice: money or friendship. A dilemma all the more complicated when a traitor hides for sure within the team.

With its dark and scary atmosphere that is reminiscent of survival Alice in Borderland, this horrific little nugget is sure to blow your mind. With its many twists, you will rarely be able to predict what will happen. So a piece of advice for your viewing: NEVER be fooled by appearances…

KOMI IS SEARCHING HIS WORDS (NETFLIX)

Shôko Komi is an atypically beautiful teenager whom her classmates and teachers willingly place on a pedestal. Thus, from her first day in high school, an invisible barrier is created between her and the rest of her class, who perceive her as inaccessible.

Hitohito Tadano, sitting right next to Komi, however, notices something that challenges him: Shôko seems to have difficulty communicating. She suffers from extreme social anxiety. Despite everything, Komi is determined to make efforts to make friends; Tadano decides to help him.

Created by mangaka Tomohito Odathe work Komi is looking for his words caused a sensation in the Land of the Rising Sun when it was published in 2016. Long remained in the shadows in France, Netflix has partly repaired this injustice by offering an animated adaptation broadcast since last October on the platform and part 2 of which has just been released. start.

Dynamic and refreshing, the series offers us episodes that are both funny and intelligent, aptly exploiting the theme of social anxiety. A successful bet for a manga that sometimes suffers from a serious lack of rhythm. It’s the cuddly anime of the season!

Haruka Nanase is a high school student with a passion for swimming. So the day he learns of the closure of his old club, he goes there discreetly accompanied by his former comrades. Nostalgic for their primary years, they hope to find the trophy they won during their last team competition.

There, they come face to face with their partner at the time: Rin Matsuoka. But the latter is no longer the playful little boy they knew. Their childhood friend has changed a lot… And intends to challenge Haruka by swimming.

Inspired by a Japanese light novel of Koji Oji, Free! its constituted a real community over its seasons broadcast between 2013 and 2018. The story, simple in appearance, conquers the public thanks to its few touches of emotion and humor, and its sublime animation, produced by Kyoto Animation studios . An adaptation as entertaining as it is beautiful to watch!

Whether out of interest in sports or the muscular bodies of his characters, Free! will surely make you want to take a dip. And that’s good: the first part of his final movie has just been announced for a cinema broadcast in France in May 2022 as part of Ciné Matsuri!

FIND THESE ANIME ON ADN SITES, CRUNCHYROLL and NETFLIX.