If you’re a parent (particularly a mom) on the internet, then you know there are no shortage of reasons for judging other people’s parenting.

I don’t know why that became a thing preferable to, you know, supporting other parents in their decisions and choices, but you know. Whatever.

One of the biggest debates is often between the “crunchy” moms who do things like exclusively breastfeed, babywear, co-sleep, and cloth diaper and the rest of us.

This mom is one of “the rest of us,” who does a little of everything because that’s what’s convenient and what works for her. Her sister-in-law is of the crunchy variety, and so they disagree on more than a few things.

I’m 19f, I have a 3 week old baby girl. I do still live with my parents, but since I pay rent equally, they say I can have just as much of a say in who comes and goes from the house as they do. I’ve never actually taken advantage of this rule until recently enough.

Mostly it’s been OP biting her tongue at their criticisms and “well-intentioned” gifts that she sometimes uses and sometimes doesn’t.

Basically what that is is f**king stupid, they use reusable wipes/nappies, think formula is the epitome of evil, baby wearing, the list just goes on. I’m the complete opposite, pacifiers, supplementing with formula due to low supply, disposable wipes and nappies.

They are completely against the products I use and often give me things like SiLs breastmilk in bags, disposable nappies their LO has grown out of, etc. I’ve used some but it’s not really my cup of tea.

Recently, though, her brother and sister-in-law took a babysitting opportunity and turned it into a chance to throw away nearly all of her expensive, single-use items (including formula, which, wtf).

On Monday night, my brother and SiL were minding my baby for me since it was my birthday and my babys father (not together, very close friends and co parents) took me to get some dinner in one of my favourite fast food places. It was great and really relaxing.

When I got home that evening, my SiL said that she did some cleaning and “threw out anything I don’t need”. This immediately gave me red flags but they were in a hurry to get out the door and left almost immediately. When I went into the nursery, every disposable nappy and wipe pack was gone and replaced with some reusable cloth ones.

Same with my formula, there was 8 tubs and all of it was gone, I’m not able to replace them at the moment and solely breastfeeding isn’t sustainable for us.

OP took a bit of time to calm down, then confronted them. They said they “couldn’t afford” to replace what they tossed and so OP told them they weren’t welcome in her home until the could.

I was extremely angry and I just turned my phone off to avoid being mean to my SiL. She and my brother came over yesterday to collect something they forgot and that was when I confronted her. I told her she has to replace everything she dumped. When she said she can’t afford to, I said fine, just get out and don’t come back until I’ve been reimbursed or everything is replaced with the original items.

Her parents think the other couple was totally in the wrong, but that OP might have gone too far in banning them from the house.

My brother thinks I’m being a massive a$$hole and he’s on his wife’s side.

Our parents think i’m being completely reasonable here but they think telling her essentially not to come back is taking it too far.

The top comment said what we’re all thinking, which there is no world in which OP is wrong to be mad, here. 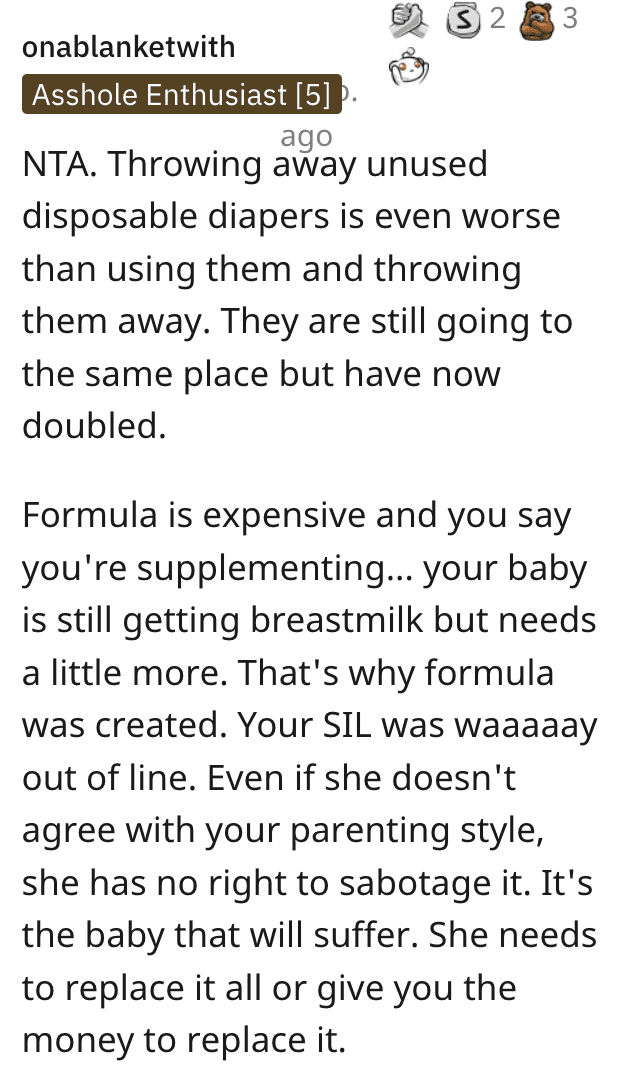 Some people think she is so NOT the a$$hole that she should probably go one step further and call the police. 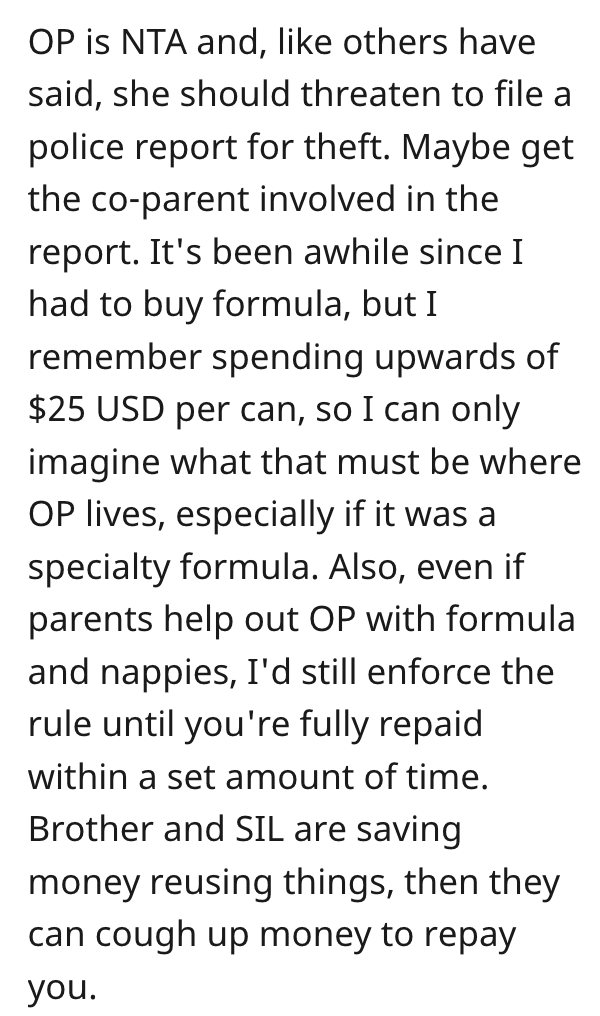 Because why would you want a bunch of thieves in your house? 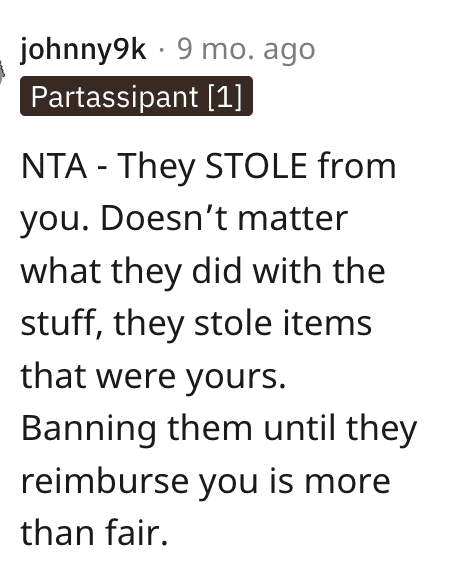 In no scenario were they being helpful or making the world a better place. 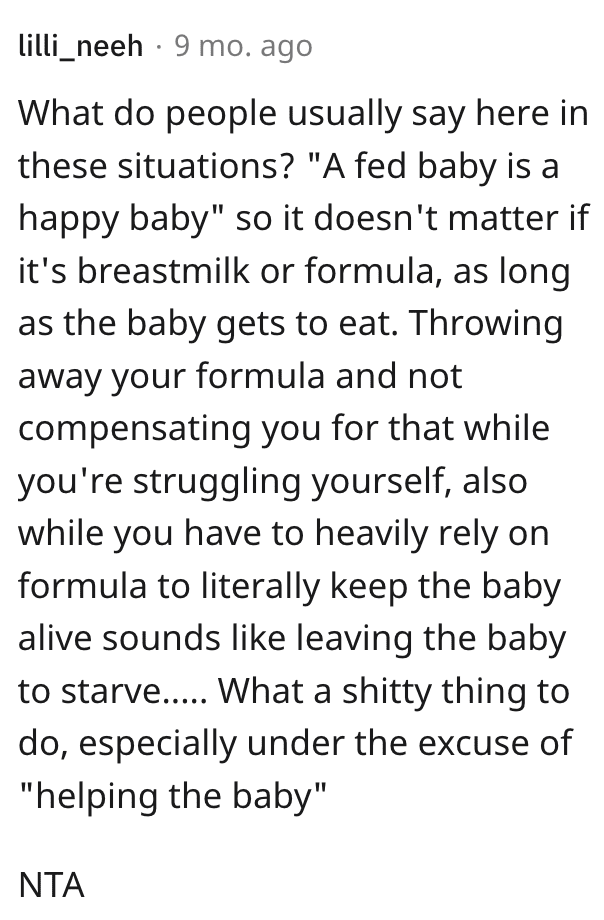 They definitely didn’t have their niece’s best interests at heart. 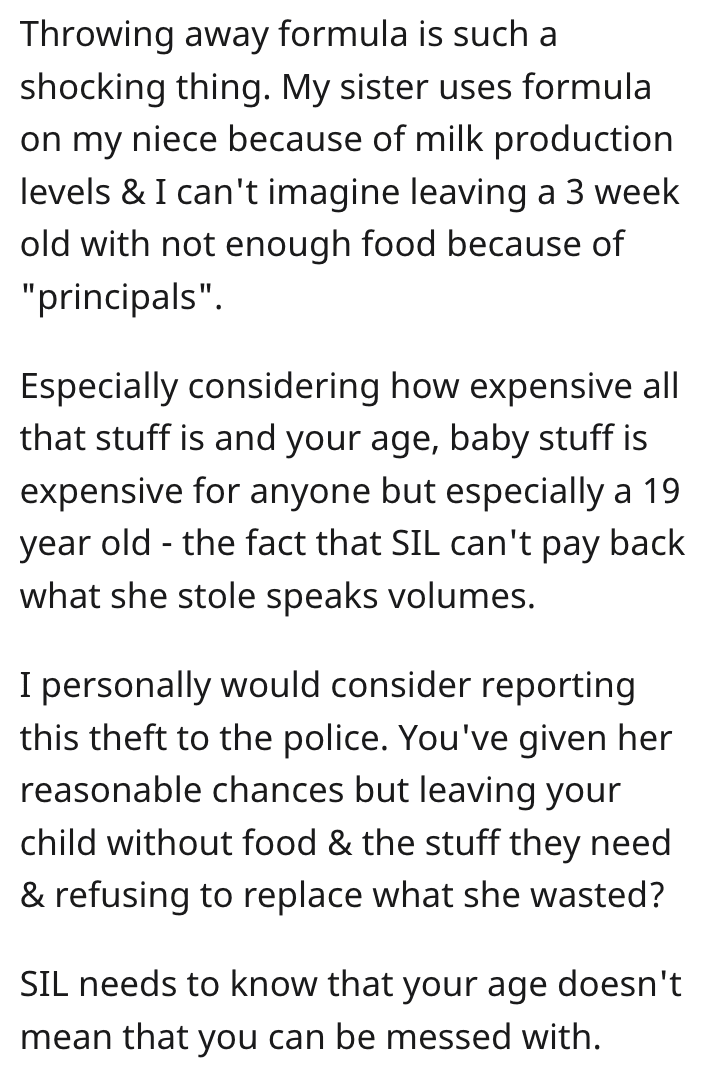 Y’all I am honestly shocked by this post, even as someone who knows about the Mommy Wars and breastfeeding.