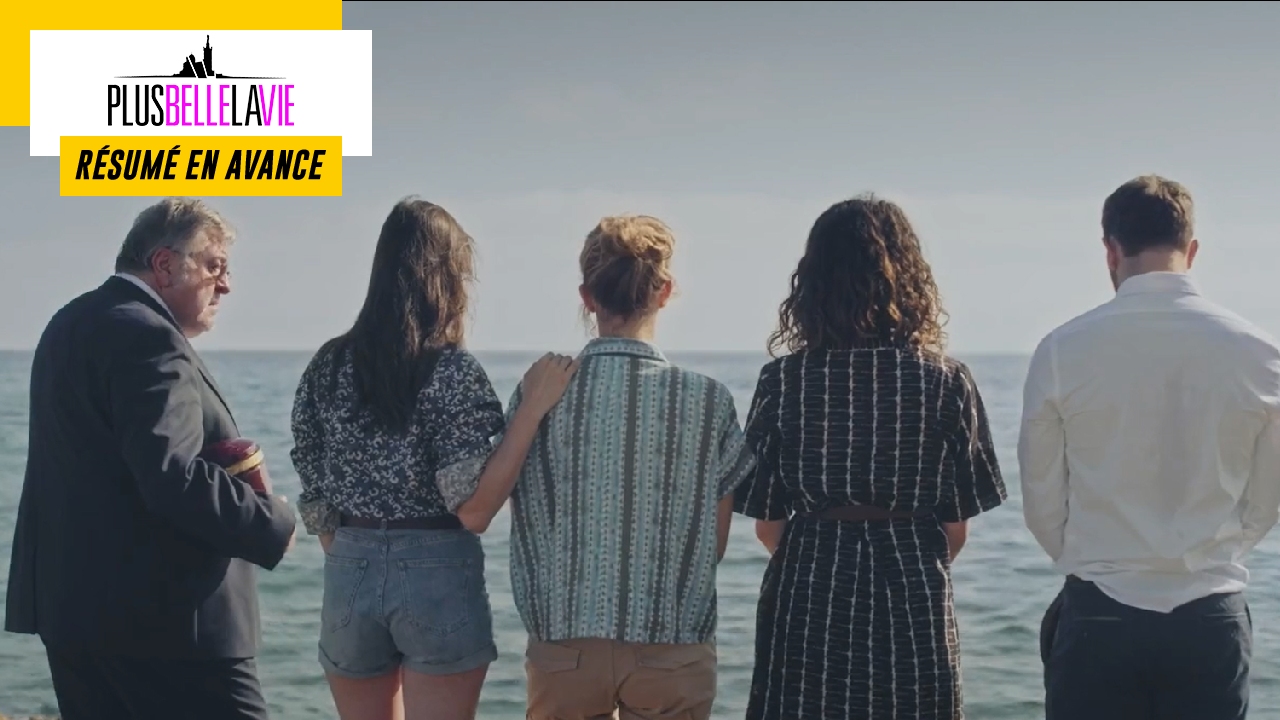 In the next episodes of “Plus belle la vie”… While his relatives are saying goodbye to César, Mirta’s disorder is accentuated and Father Luc does not seem indifferent. Eric, meanwhile, does not intend to remain defenseless.

A moving farewell to Caesar

Prosecutor Revel reframes Baptiste, because he let the arsonist slip away despite his warnings. The colonel of firefighters reminds him that he is talking to a firefighter who has no prerogative to call anyone.

He also congratulates Baptiste for having preferred to put out the source of the fire rather than arrest the suspect. They still managed to obtain information since they now know that the arsonist is an athletic woman, who has technical skills since she used time fuses to start a fire.

Meanwhile, Claude Rochat, Sabrina, Barbara, Emma and Kevin say their last goodbyes to César. The memories of the young man come to the surface. Rochat then dumps his nephew’s ashes into the sea.

After this touching tribute, Emma invites Barbara to her home. They reminisce about their times spent with Caesar. Baptiste’s companion wonders if Caesar would still be alive if she had loved him.

At the police station, Patrick Nebout questions Fleur about her involvement in the fires, but the young woman claims her innocence. Patrick informs him that the scientific police took samples from his hands and his clothes and that they will know the truth very quickly.

Unfortunately, the results of the analyzes confirm the innocence of the young woman. But Patrick remains convinced that the sect is at the origin of the fires.

Back at Olivier Jourdan’s, Fleur tells him about his interrogation and also explains Commander Nebout’s theories to him. Olivier Jourdan then asks her if the young woman thinks he is responsible for the fires. That’s when the guru goes to look for a box in the next room. Inside is a small notebook which he burns.

At the Mistral, Mathis does not want to eat and asks for his father. Exasperated, Emma calls Baptiste to tell their son why he is not there. She puts him on speakerphone. The young woman then hears her husband tell Mathis that they no longer love each other and that he has a new house. Hurt, Emma hangs up on him. A reaction that exasperates the young man who is pleased to have left him.

During a raid, Mirta and Father Luc come across a homeless man who begs them for a room. The priest offers him coffee and sandwiches instead. But as he bends down to grab the food, the homeless man tries to snatch Mirta’s watch. Father Luc luckily manages to stop him in his tracks.

Back at the hotel, the young man gives Nelson the book he had asked for. The latter has learned that Mirta has been assaulted and he wonders how anyone can attack a woman like her, so sensitive and so kind. Father Luc adds that she is bubbly and very generous. Nelson then points out the beauty of Mirta.

Father Luc agrees with her, and specifies that she is as beautiful on the outside as on the inside. He also tells her that Mirta upsets him as a man. Ever since their paths crossed, his feelings for her have only grown. For Nelson, there is no doubt, he fell in love with her.

At the Mistral bar, Yolande comes across Mirta, lost in thought. She seeks to find out more about her mystery man. The sexagenarian then reveals to her friend that this man is younger than her. Yolande doesn’t see where the problem is and convinces Mirta to take the plunge.

A few hours later, Mirta goes to the church to speak with Father Luc. The young man takes the opportunity to confide in her that he has feelings for her. He tells her that he has loved her since the day they met. Incredulous, Mirta is unable to tell him that it is reciprocal and leaves the Church hastily.

Eric is upset. After the risk of fire and the psychopathic neighbor, he now has to deal with Simon’s ex out of nowhere. Simon explains to the ex-policeman that he couldn’t throw him out because he helped him a lot when he took over the farm. They lived together for six months.

They were very different, but both were going through a complicated period that brought them very close. While they are talking, Eric receives a mysterious text message informing him that his pest control package is available. He then explains to his boyfriend that he must look for other fire extinguishers in Marseille.

Read Also:   The Spanish Inn on NRJ12: what do we know about the planned sequel to the "Greek Salad" series? - News Series

Back at the farm after picking up his package, Eric overhears Marc criticizing him to Simon. Simon’s ex half-calls him a nag, who hits first and talks afterwards. Eric offers him to give a demonstration.

A little later, the former policeman shows Simon the gun he bought on the black market, so that his companion can protect himself if Mallard were to come and threaten them. But Simon hates resorting to violence and rebels.