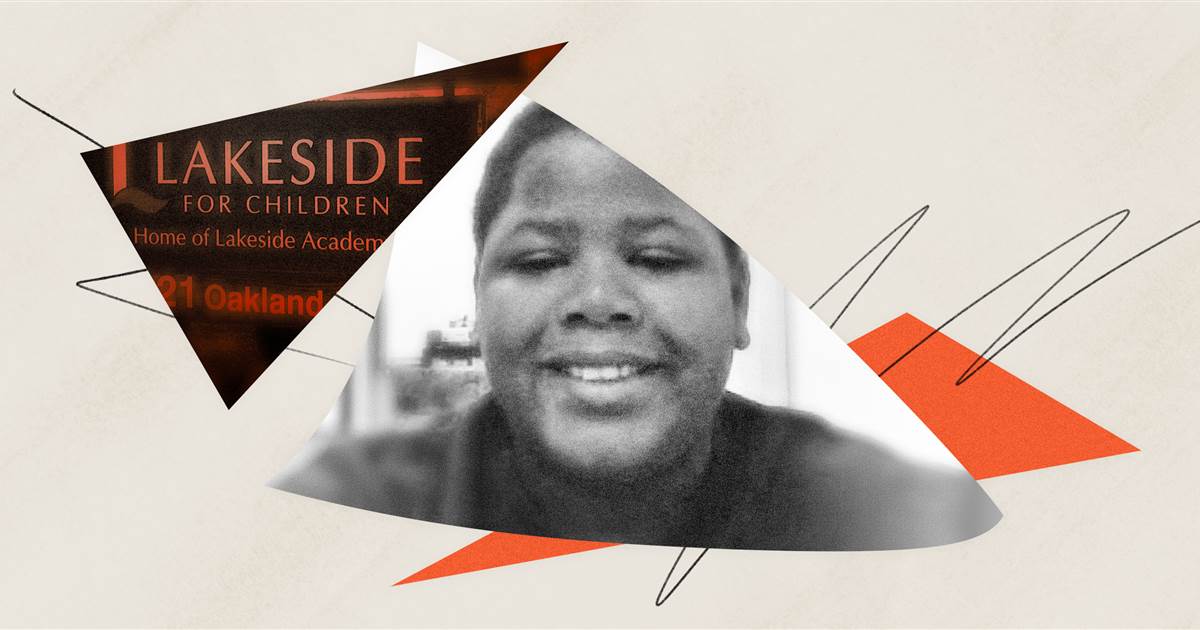 Nearly a year ago, Meghan Folkerson rushed to 16-year-old Cornelius Frederick as he lay unconscious on the floor of the cafeteria at Lakeside Academy, a residential treatment center for at-risk youth in Kalamazoo, Michigan.

Folkerson, who was once Cornelius’ caseworker, tried to revive him. She began cutting off his shirt so that a defibrillator could be used. But Cornelius, a foster child whose mother had died four years earlier, didn’t wake up.

Folkerson didn’t see what had happened, but Lakeside’s security cameras captured it all: After Cornelius threw a sandwich at another child during lunch on April 29, seven male staff members held him on the floor for more than 10 minutes, putting weight on his legs and torso. Cornelius died two days later at a hospital.

The fatal restraint ultimately led to a re-evaluation of the care children receive in these facilities in Michigan and increased scrutiny of the for-profit behavioral health company that ran Lakeside: Sequel Youth and Family Services.

“I’m still angry,” said Folkerson, who was director of case management at Lakeside, which closed last June. “I think that everyone is allowed and going to be angry at this death. Because it was preventable. It was uncalled-for.”

For more on this story, watch “Children That Pay” on MSNBC on Sunday at 10 p.m. ET.

Michigan officials also believe Cornelius’ death was preventable. A state task force convened last year has proposed new rules banning the use of restraints on children living in group homes, like Lakeside, in all but the most extreme circumstances, such as to save a child’s life. The task force also recommended other changes to the state’s child welfare system, including several measures to reduce the number of children sent to group homes and to strengthen oversight of children in its care.

Officials expect the new regulations to take effect after a required public hearing in May.

“The state is entrusted with the care and safety of kids after they’ve been abused and neglected,” said Stacie Bladen, director of children’s services at the Michigan Department of Health and Human Services. “We have an absolute responsibility to keep them safe while they’re in our care and custody.”

Sequel runs dozens of programs in 19 states for vulnerable youth, including foster children and children with disabilities. Allegations of neglect and abuse — including improper use of restraints on children in its facilities — have dogged the company.

At least three states — California, Michigan and Washington — severed ties with Sequel in 2020.

Sequel said that it takes “any allegation of abuse or negligence seriously” and immediately reports any claims to authorities.

“We regret that some states, influenced by political and activist pressure, have prioritized perception over the best possible care for the individual,” the company said in a statement. “We remain steadfast in our mission to provide compassionate, therapeutic care knowing that the overwhelming majority of state child-serving agencies in the United States continue to find our services to be essential and operating at, or exceeding, their highest standards.”

According to a Sequel spokesperson, staff members are only supposed to use restraints as a last resort, such as when a child is a threat to themselves or others. In 2019, the company announced it would implement a program aimed at eliminating the use of restraints at its facilities.

But Folkerson, who is speaking publicly about Lakeside for the first time, said that during the two years she worked there, she witnessed staff members increasingly use inappropriate restraints on children, in some cases as punishment. This included painful and dangerous “supine” and “prone” restraints, in which a child is restrained while lying on his or her back or stomach. Cornelius was restrained at least 10 times in the six months prior to his death, according to records.

“Unfortunately, if you had asked a majority of our staff six months prior, we probably could have told you that this was going to happen,” she added.

One resident told police that staff members would restrain children “however long they feel like it.”

Cornelius was one of the first male clients assigned to Folkerson when she started at Lakeside. She still remembers the scared, lonely boy who was desperate for attention, and a family of his own.

His death was ruled a homicide and three former Lakeside employees have been charged with involuntary manslaughter and child abuse. Each has pleaded not guilty. Lakeside nurse Heather McLogan, one of those charged, waited 12 minutes to call 911 despite signs that Cornelius had fallen unconscious, according to a state report.

“They came off his legs, they came off his arms, and he just laid there,” she told police, according to body camera video obtained by NBC News. “And initially it, it — I was like, he, we thought he was just faking.”

Zachary Solis, another staff member who was charged in the case, told investigators that at first, Sequel management told him he had done nothing wrong. He was shocked, he said, when he was later fired.

“They watched the video, said we were cleared,” Solis told police in an interview.

“I was like, what the heck,” he added. “You know. I said, they said everything was straight. You know nothing was foul. Nothing went wrong. We did a good job. We did what we were trained to do.”

Sequel said in a statement that the restraint used on Cornelius was “in clear violation of policies and training on the appropriate use of emergency safety interventions.”

“If any local staff member made a statement to the contrary, it was inaccurate and inappropriate,” the company said. “Mr. Solis and other staff were swiftly terminated for their participation in the restraint.”

After Cornelius died, Michigan issued emergency rules restricting restraints in group homes, and announced it would no longer contract with child care facilities that use Sequel. Officials then convened a task force composed of child welfare officials and private child care providers to propose rule changes that would improve care for children in state custody.

“Cornelius was the catalyst for the urgency of making these reforms, and the depth we went to,” Bladen said. “We did not leave a stone unturned when looking at how we can improve safety and care.”

Bladen said that under new licensing rules, child care providers will have to phase out the use of restraints this year, leading to a near-ban in 2022. Any restraint that restricts a child’s airways, including when a child is lying facedown on the ground, will be banned. The use of seclusion will also be barred.

In addition to working with providers to train staff in de-escalation techniques and alternatives to restraint, the state is also implementing several measures aimed at improving oversight, including more robust monitoring at facilities.

“The quality of care in congregate care settings needed to improve,” Bladen added. “We need to provide children the services and supports to heal. It needs to be trauma-informed, not coercive, not controlling.”

Folkerson, who is now pursuing her master’s degree in social work, said she hopes the new rules will lead to systemic change.

“I just feel like something needs to come of this,” she said. “I don’t want Cornelius’ death to just go away.”