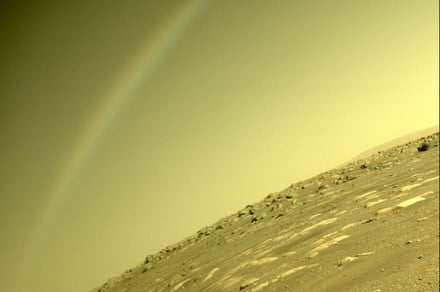 People exploring NASA’s database of recently snapped Mars images had been wondering if they’d spotted a rainbow arcing over the Martian surface.

With photos of Mars clouds highlighting the fact that there is indeed moisture in the Martian air, some folks pondered whether rainbow formation was therefore a possibility.

Well, it turns out it’s not.

NASA’s Jet Propulsion Laboratory, which is overseeing the current Mars Perseverance rover mission, cleared up the mystery on Tuesday, explaining that as it never rains on Mars, it can’t be a rainbow. It added that the photo is, in fact, showing lens flare, something photographers back on Earth experience all the time and which is caused when a bright light source, in this case the sun, shines into the lens.

“Many have asked: Is that a rainbow on Mars?” the JPL team said in a tweet. “No. Rainbows aren’t possible here. Rainbows are created by light reflected off of round water droplets, but there isn’t enough water here to condense, and it’s too cold for liquid water in the atmosphere. This arc is a lens flare.”

Many have asked: Is that a rainbow on Mars? No. Rainbows aren&#39;t possible here. Rainbows are created by light reflected off of round water droplets, but there isn&#39;t enough water here to condense, and it’s too cold for liquid water in the atmosphere. This arc is a lens flare. pic.twitter.com/mIoSSuilJW

In another tweet, the team elaborated, saying that while Perseverance has sunshades on its front Hazcams (one of numerous cameras attached to NASA’s latest rover) for driving forward, sunshades weren’t considered essential on its rear-facing Hazcams, and it’s images from these that will occasionally show the scattered light artifacts, or lens flare.

Still, if the explanation is a disappointment, Mars meteorology fans still have something to get their teeth into, as Perseverance’s MEDA (Mars Environmental Dynamics Analyzer) system this week delivered its first-ever weather report from inside Mars’ Jezero Crater, where the rover touched down in mid-February.

“MEDA’s radiation and dust sensor showed Jezero was experiencing a cleaner atmosphere than Gale Crater around the same time, roughly 2,300 miles (3,700 kilometers) away, according to reports from the Rover Environmental Monitoring Station (REMS) aboard the Curiosity rover stationed inside Gale,” NASA said.

MEDA weighs around 12 pounds (5.5 kilograms) and features a plethora of environmental sensors to record dust levels as well as six atmospheric conditions: wind (both speed and direction); pressure; relative humidity; air temperature; ground temperature; and radiation (from both the sun and space).

NASA said that over the following 12 months, MEDA will provide the team with useful information on Mars’ temperature cycles, heat fluxes, dust cycles, and how dust particles interact with light, ultimately affecting both the temperature and weather. It’ll also gather data on solar radiation intensity, cloud formations, and local winds that could help NASA to better plan the upcoming Mars Sample Return mission, as well as future astronaut missions to the faraway planet.