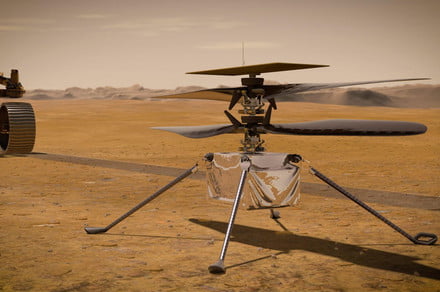 Ingenuity stayed stuck on the Martian surface on Thursday when it was supposed to be flying high.

A software issue prevented NASA’s helicopter from lifting off for what would have been the aircraft’s fourth and most ambitious flight to date.

Engineers at the Jet Propulsion Laboratory (JPL), which is overseeing Ingenuity’s Mars mission, described the helicopter as “safe and healthy,” adding that it will try again on Friday, April 30.

Ingenuity made history on April 19 when it became the first aircraft to perform powered, controlled flight on another planet. Since then, the 4-pound, 19-inch-high dronelike vehicle has taken two other flights of increasing complexity.

Thursday’s flight effort failed due to a software issue that first emerged during a test of Ingenuity’s rotors prior to its maiden flight, when the aircraft was unable to transition from “pre-flight” to “flight” mode. JPL engineers beamed an update to Ingenuity’s software in a matter of days but said the fix would have a 15% failure rate that would prevent the aircraft from entering flight mode.

Space fans are eager to learn if Ingenuity can ace its fourth and most complex flight to date in Mars’ superthin atmosphere.

While the helicopter’s first airborne effort involved only a hover, its second and third outings saw it zip across the Martian surface. The next flight, however, will see Ingenuity fly faster and further than ever before. JPL said it plans for the helicopter to climb to an altitude of 5 meters before embarking on a flight lasting 117 seconds, 37 seconds longer than its previous effort.

During part of its trip, Ingenuity will use its downward-facing camera to snap pictures of the Martian surface.

Finally, the aircraft will hover briefly to take photos with its color camera before heading back to its starting point. Capturing detailed imagery of rocky terrain that’s hard for a wheel-equipped rover to reach is likely to be one of the main activities of a future, more advanced helicopter.

With that in mind, the team at JPL is excited to see how Ingenuity copes with Thursday’s more demanding test flight.

Voyager 1 Spacecraft Picks up the Hum of Interstellar Gas