Mars Helicopter to Attempt a More Complex Flight on Thursday 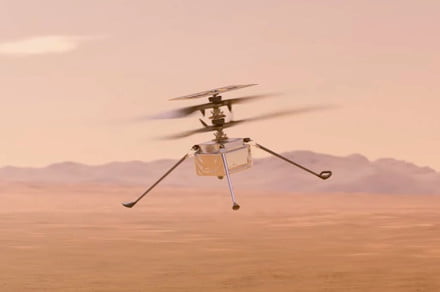 NASA has announced that its Ingenuity Mars helicopter will attempt a second, more complex flight on the red planet on Thursday, April 22.

The flight attempt will come just three days after Ingenuity became the first-ever aircraft to achieve powered, controlled flight on another planet.

In a tweet on Wednesday, NASA said Ingenuity’s second flight will involve the machine climbing to a height of five meters before tilting slightly and flying two meters sideways. Ingenuity will then come to a stop, hover in place, and make turns to point its color camera in different directions. After that, it’ll come in to land.

The Mars helicopter’s maiden flight involved only a hover, three meters above the Martian surface. NASA said previously that each of Ingenuity’s five flights will be increasingly complex, with the final one expected to see it fly a distance of up to 300 meters.

How do you top #MarsHelicopter’s historic first flight? Go bigger.

Could These Be Apple’s Next Beats True Wireless Earbuds?