I don’t know about you, but when I read that a man wants to keep the fact that he’s dying from his wife, I get a little judgy. You’re supposed to be each other’s person, their till-death-do-us-part, and to keep something that will ultimately affect you both a secret, well…that can’t be right.

As with many Am I the A$shole posts, though, there’s always a bit more than meets the eye -and it should come as no surprise that dying can be intensely personal and varies from person to person.

The husband in question gives us a little background up front. A medical condition means he never expected to live a long life, but he says that a recent “complication” took his time from 20 or 30 years down to 1.

Male, 31 here. For the past 15 years, I’ve been dealing with a medical condition that requires constant medication and consistent doctor’s visits. I had always been projected to live until 50-60ish, however, a recent complication has cut that down to 12 months, 16 at best. In about 10 months, my condition should start getting a lot worse. After 12 months, I’ll essentially be living in the hospital.

He’s married and doesn’t know how to tell his wife, and all of this has (understandably) made him rethink his short future.

I am married of 4 years (no kids). I haven’t had the heart to tell my wife the news. I don’t even know how. We always knew I’d die younger than I wanted to, but we never expected it to be this soon.

As much as I know I should tell my wife, I don’t want my last year to be plagued with an impending doom.

My wife and I have always talked about living abroad somewhere, maybe Australia, but we’ve never found the time or money to do so. I’ve been saving up to go to graduate school, however, I don’t see much point in that now.

He wants to enjoy the time he has left, and to give his wife a nice time, a good memory, of this final year of his life, but wonders if he’s wrong to keep something this huge from her until their time is almost gone.

So here’s my idea: take some of that money, and take my wife to Australia for a few months, and enjoy the time together. I have a job I can work remotely from anywhere, and she has a job that she can easily find work anywhere. We can work part-time, and enjoy our time together. When we get back, or maybe towards the end of it, I will break the news to her. I just wouldn’t want the trip to be ruined for us by constant reminders of me dying. I know my wife, and she’s very emotional – to the point where I feel like she will be crying everyday and not enjoying herself. I want this memory to be a good one for her, and not plagued by my time ticking down.

As a note, he wants us to know he’s not a jerk – his wife will be taken care of in every way he can imagine after he’s gone. He just wants to live these last months on his own terms.

AITA for putting off telling her I am dying?

Note: I have life insurance that will take care of her, so I am not too worried about spending this money now on this trip. And I plan on talking to her about a sperm bank, just in case she decides she wants my kids in the future, as well as premised birthday cards and other things for her to have.

The people of Reddit were ready and waiting to weigh in, and as usual, they held nothing back. 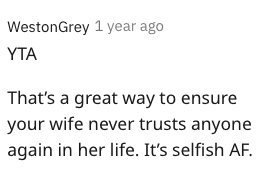 This person was a bit kinder, saying he doesn’t suck, but also saying that from personal experience, they think she deserves to know. 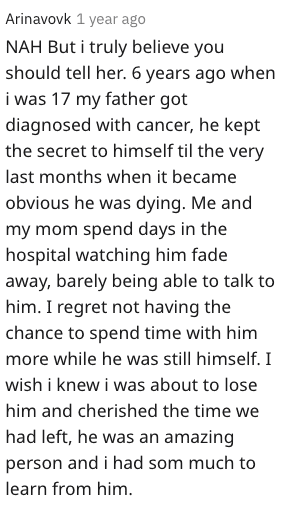 Others pointed out that she’s going to need time to process, too, and he’s taking that away from her.

And this very good point, which is that he might think he knows how she would choose to spend their last year together, but he doesn’t actually know unless he asks – and he never will. 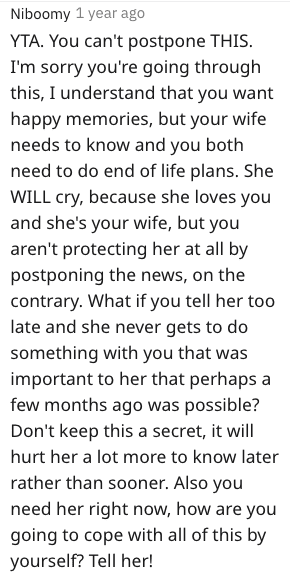 This excellent thought from a soft-hearted person says that OP is going to need his partner, that this isn’t something he should go through alone. 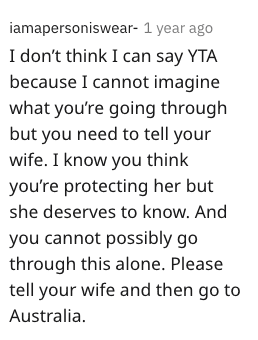 I agree that this is just a sad situation all the way around, and I hope that he decides to tell her so they can do this together.

That said, he’s going through something most of us will thankfully never have to face, and so maybe he deserves some time and grace, too.

What are your thoughts? Drop them on us in the comments!