Isn’t it great to embarrass someone and really put them on blast?

If they totally deserve it, I mean?

You bet it is!

But this guy who shared his story on Reddit’s “Am I the A**hole?” page is now wondering if he went too far with what he did to his brother.

Fast forward a year and we welcome a sweet baby girl. After her maternity leave was up, I took my vacation to stay with my baby. Well I found out that being a dad and taking care of the house is 1000 times better than working in a stressful office. We discussed it, and I became a full time SAHD.

I like being a SAHD. I even enjoy keeping the house clean, cooking, taking care of the kids (7F, 4M and 1M), being involved in the mom groups, little league…etc.

The only person who seems to have a problem with things is my older brother (44M). I don’t know how, but despite being raised by parents who are very much champions of equal rights, he grew up to be the embodiment of “man provides and guides, woman makes home and follows”. Which is why he is a 2 times divorcee who has terrible relationships with his kids.

For the past 7 years he has been making jokes about me, trying to imply that I am less of a man because my wife earns money while “I play little wife”. I ignore him if I’m in the mood to, or just shake my head at him.

Well my wife and I were d**nk one time and we came up with a bit of a naughty solution. He gives major vibes of being a prude (and is casually h***phobic TBH). So when he made a joke last Sunday along the lines that “if you were married to a man, you would 100% be the bottom” I hit him with “funny you say that, I am a bottom. ‘wife’ really knows how to use a d**do and harness to make a man see the stars”.

He turned so red, everyone kind of let out a shocked laugh and he finally shut up. After a while he said that he did not want to hear about what I do with my wife in our bedroom. I said if he keeps his comments to himself, I would have no reason to share.

But today mom called me to say that he refuses to attend Sunday dinner if I am there unless I apologize. I refused to and mom is now the one feeling bad.

One person said this guy is NTA and his brother sounds insecure. 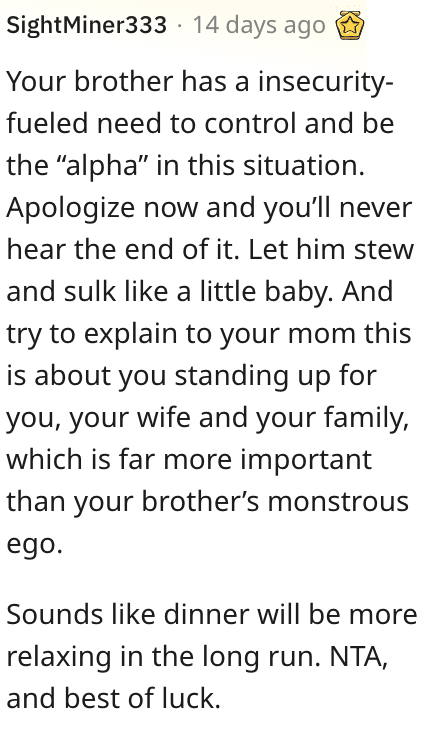 One individual said his brother shouldn’t have brought it up. 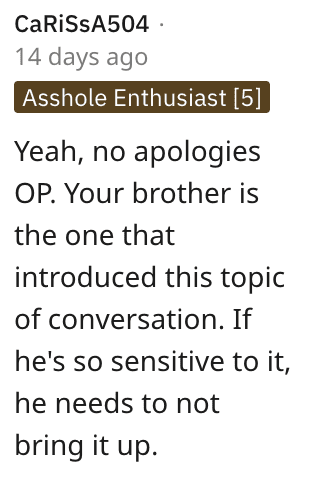 And another Reddit user said this guy’s parents should have shut down this behavior from the brother a long time ago.