The truth hurts sometimes, but you also have to put people in their place once in a while.

And a guy shared a story on Reddit’s “Am I the A**hole?” page asking the readers there if he was wrong to tell his wife that their daughter is more important than she is.

Read on to get all the details and let us know what you think in the comments.

“Our daughter is turning 18 in October.

She a great kid, always pulled straight A’s, never in any type of trouble and she’s very respectful. My wife recently decided to have a talk with her about adult responsibilities. I had no knowledge of this conversation until my daughter came to me crying because she was scared about living on her own.

I was confused at first, then she told me her mother said she needs to start looking for a job because she’ll be expected to get her own place after her birthday. I was appalled because we never discussed throwing her out at 18.

When I confronted my wife, she said our daughter wasn’t a child anymore and needed our push to become an adult. I told her I was really baffled that she would exclude me from such a serious decision/conversation.

I asked my wife how does she expect our kid to make it on minimum wage, especially considering the rent is out of control in our area. She then informs me she had planned for us to pay half her rent until she was 20. I asked her, why she wanted our kid gone so bad. As the argument intensified, I believe she slipped by saying she needed the space (her bedroom) for her art studio.

I couldn’t believe it. I told my wife if her hobby was more important than our daughter, she should be the one looking to rent. However, she took that as me saying move out but that’s not how I meant it. I was implying for her to rent more space for her studio, and to leave our daughter alone. She didn’t believe that’s what I actually meant, she than gave me the silent treatment for 3 days.

Our daughter however was still upset as she processed her mother wanting her out. She realized moving into a rental meant she had to leave her two cats behind. She’s had these cats since she was a young child, that alone devastated her. She told me, “I don’t want to turn 18, I don’t want to celebrate my birthday.” I picked the argument back up with my wife at that point. I said, “Our daughter isn’t moving out until she decides on her own terms because she is more important than you or your hobby.”

She look stunned, and maybe in the heat of the moment I didn’t choose my words wisely. I couldn’t bare to see our daughter so upset any longer. I don’t want her struggling to make ends meet and not be able to follow her dreams.

The last thing I want for her is to feel rushed. As far as my wife goes, she’s not talking to me at all and she’s been cold towards our daughter.”

This person said this guy is NTA…but his wife sure is!

Another Reddit user made a good point: you should NEVER stop being a parent to your kids. 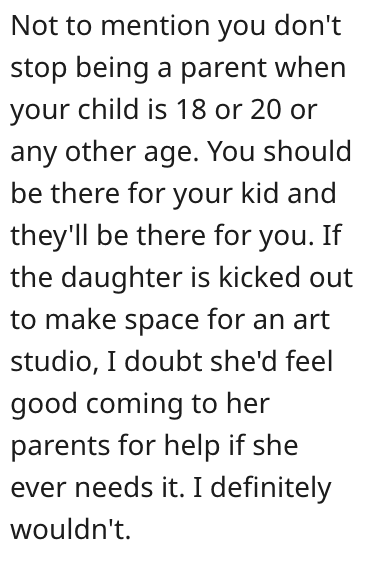 And this individual also said he’s NTA and said what his wife did is messed up.