Or at least a crowded restaurant.

Let’s take a look at this story and see if this man was wrong for telling his aunt to zip it.

“When I (30M) was 5, my family took me to one of those Japanese steakhouses where they cook the food at your table.

When the cook lit the grill and the huge flame shot up into the air, it scared the heck out of me and I ran and hid in the corner and was too afraid to come back to the table. My aunt, (64F) has teased me about that ever since. That was twenty-five years ago and I swear she brings it up every single time I see her!

I’ve told her repeatedly to stop talking about it. My parents have also asked her to stop bringing it up to no avail. It’s gotten so tiresome and embarrassing and she teases me about it in front of the whole family despite me repeatedly telling her to stop.

I’ve never really gotten along well with my aunt and lately I’ve made it a point to avoid her at family gatherings. We celebrated my birthday Friday and I wanted to go to one of those Japanese steakhouses. I didn’t invite my aunt but my grandmother invited her behind my back.

I didn’t know she was coming until she showed up. I was already p**sed off that my grandmother invited her (she told me that my aunt is family and I cant just exclude her from everything) but as soon as we sat down, my aunt started ribbing me about that incident when I was five. I told her to stop bringing it up and my mom told her to stop as well, but when the cook was fixing to light the hibachi, she asked me in this really condescending way “You sure you don’t wanna go hide in the corner for old time’s sake?”

I finally just lost my temper and went off on her right there in front of the whole restaurant. I basically yelled at her “Will you just shut up about that already? That was 25 years ago! Is that literally all you have to talk about? I’m sick of hearing about it! This is why I didn’t invite you!”

I swear the entire restaurant must have been staring at me and I felt like just walking out. The entire rest of the dinner was awkward and I couldn’t even enjoy my meal. After we left my grandmother told me that I embarrassed her in front of everyone and that my outburst was completely uncalled for and that I owed my aunt an apology.

My parents told me I didn’t owe my aunt anything and were angry at my grandmother for inviting her, but I still feel like an a**hole for losing my temper and yelling in front of the restaurant, and the whole thing was deeply embarrassing. My grandmother and my aunt are also both blasting me on Facebook for embarrassing them in public.

One reader said he’s NTA and this his aunt and his grandma sounds pretty bad. 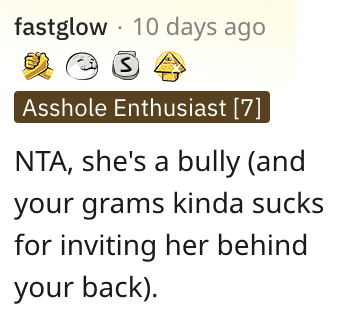 And this individual said he’s NTA but he shouldn’t have yelled in public like he did. 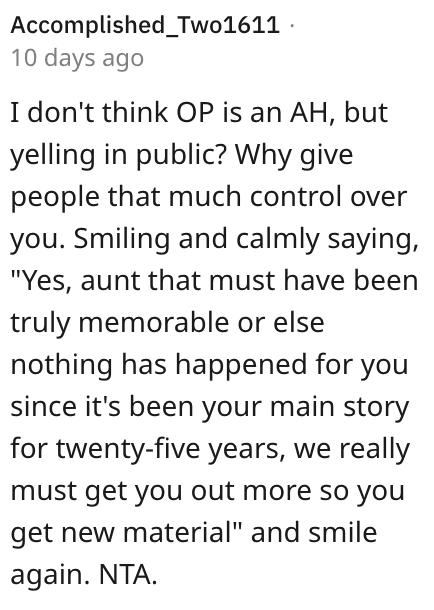 Another Reddit user said he’s NTA and that his aunt had it coming. 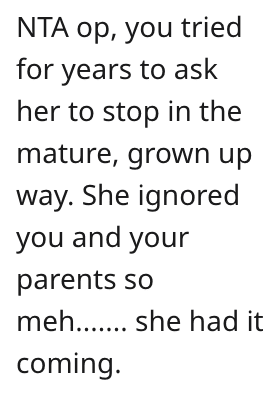