I feel like I’ve seen several stories on Reddit’s “Am I the A**hole?” page about people deciding not to pay for a younger relative’s college tuition because of some kind of falling out.

And here’s another one for you to chew on!

“I (M35) have 2 sisters that I’m close with, I also have a niece (Leah), Leah’s 16 and after my ex wife decided to split up and divorce due to infertility problems that lasted for 5 years. I started a college fund for Leah to help her go to her chosen college. That was in 2019

Now I visit my mother’s home (where my sister and Leah are living) every week to spend the weekend together.

This past weekend I was asleep upstairs while my mother, my sister and Leah were in the kitchen. I came downstairs to grab a glass of water and heard my sister talking about my ex wife expecting a baby with her new husband. This struck a nerve and I kind of froze from shock.

I then heard Leah react to the news repeatedly saying “I told you so I told you so” then explained she’s always thought that I was the one with a problem for not being able to have a baby with my ex, but that I was too “afraid” to admit due to fragile masculinity.

I could not believe what she said but what made it worse is her following statement about how my ex was smart to get a divorce before it was too late. I went upstairs and into the room and shut the door and stayed there for hours.

Mom and sister saw me about to leave and insisted to know what the problem was. I didn’t want to argue but I told them that I heard what Leah said about me. Leah stopped eating and got quiet. My sister tried to play dumb but I told her I heard their entire conversation about my ex wife and her pregnancy news.

My sister tried to backpedal saying Leah is just a kid who doesn’t know much about this stuff and was just “spouting nonsense”. I told them I don’t wanna talk about it and they refused to let me leave but I left eventually.

I later sent my sister a text telling her about how hurt and devastated I was because of what Leah said, and told her I will no longer be responsible for funding her education.

My sister kept trying to call then texted saying Leah didn’t mean what she said and offered to make her apologize but I didn’t feel comfortable being in the same room with someone who, blamed me for something that was out of my control and, something that literally turned my life upside down.

My mother tried to get me to come over so we could talk saying Leah doesn’t deserve me turning my back on her like that.”

Now take a look at how Reddit users responded.

This person argued that this guy is NTA at all. 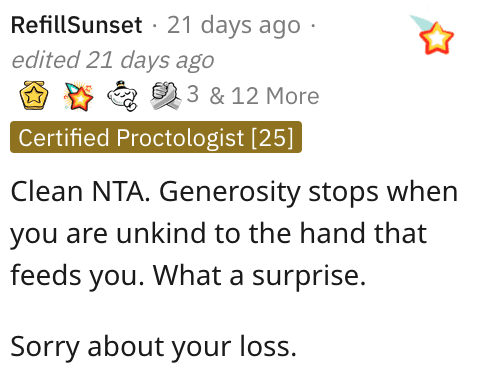 And another Reddit user said she may be young but that’s no excuse for how she acted. 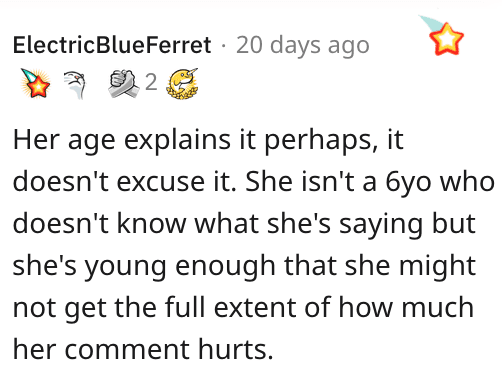 And this individual said it sounds like ths didn’t appreciate how big this gesture was from her uncle. 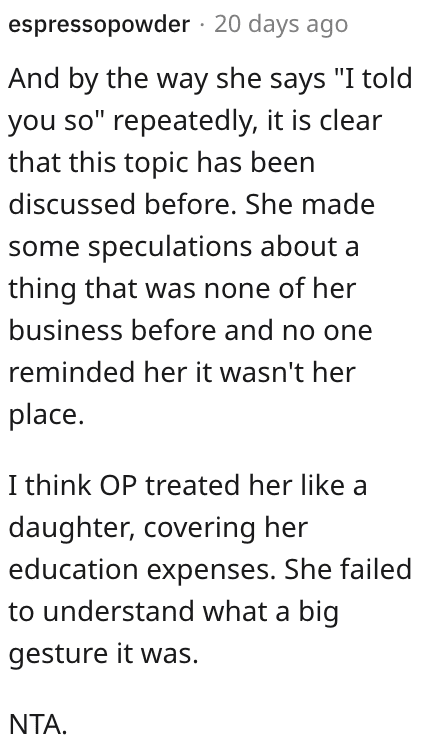