I don’t mean to sound like a jerk, but I can see this story from both sides…

On one hand, it’s totally rude to not invite your wife to a wedding because you don’t feel like keeping an eye on her.

On the other hand…well, I’ve never been married, but I have been to places with guests who were kind of annoying and dragged a party or a gathering down…

But each story is unique!

So let’s see what happened in this one!

My best friend at work, I’ll call him Rick is throwing a birthday party tomorrow. My wife (33F) thought it was a work function (as my work does frequently have work functions) until tonight. She realised it was Rick’s birthday party and it wasn’t one of those sit down dinners but rather a bar party where there is usually an open invitation to partners. She asked me why I didn’t invite her along.

I was honest and told her it’s because I wanted to have fun and didn’t want to have to babysit her. She is outgoing and can converse easily with new people that she meets but she wouldn’t know anyone at the party as she hasn’t met any of my colleagues before. This would mean that I would feel like I have to accompany her or check in on her frequently. I can’t just relax and enjoy the party.

She called me an a**hole because she said I made her feel like a burden. She’s hurt that I wouldn’t want to bring her to introduce her to my “work best friend” and colleagues.

And she also feels like because she’s a SAHM to 2 young kids (2 and 1 yo) she doesn’t get to go out much and would’ve liked to be invited out. I told her that I’d be happy to introduce her to my colleagues but I offered to organise a dinner to do so but I just want to enjoy myself and have fun at this party – and I don’t think there’s anything wrong with that.

She’s currently being cold and not talking to me. So AITA?”

One reader said this guy is the a**hole. Big time! 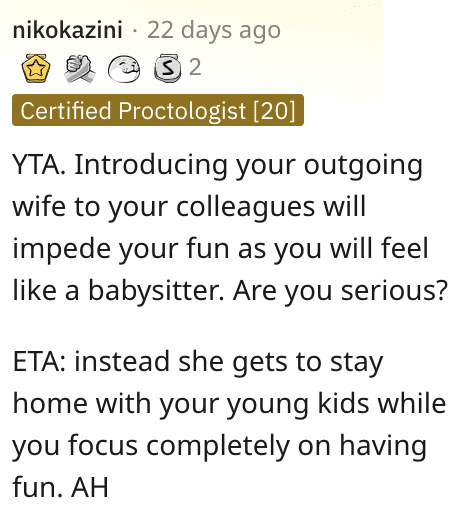 And this individual had a similar story from their own life.

This Reddit user made a good point: aren’t you supposed to WANT to take your partner everywhere? 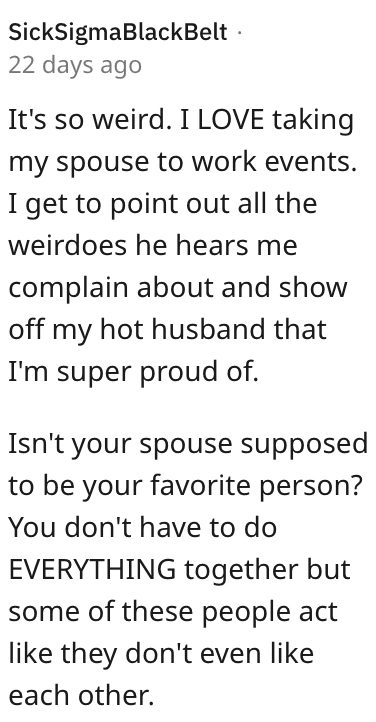