Hey, I guess some folks are more sensitive to smells than others…

But still, if you tell a woman to take her deodorant or her perfume elsewhere…you know there’s gonna be trouble.

Take a look at this story and see if you think this guy was out of line.

“My girlfriend wakes up at 7 to get ready for work while I usually get up at 11.

I am a light sleeper so whenever she gets up from the bed I’d wake up, I have no difficulties going back to sleep afterwards, also because of our conflicting work schedules we rarely see each other during the weekdays so it’s actually nice to be able to talk every morning and wish each other a good day.

The issue is that before leaving she’d apply deodorant and perfume in the bedroom, the smell is so strong that it makes impossible for me to go back to sleep and by the time I reach the couch I’d already have lost sleep. I asked her if she could apply them outside but she refused, she told me that it’s her morning routine to do it in the room and I will get used to it pretty quickly.

It’s been three months now and I definitely haven’t got used to it, non even a little. I talked to her about it again yesterday and she pulled up an article saying that smell doesn’t affect sleep. I took a look at it and I told her that’s not what the article is saying. It said the while smell don’t usually wake up people from sleep it definitely affects it. In my case it makes it impossible for me to go to sleep.

I told her I don’t like it that instead of reaching a compromise together she is pulling up articles to tell me I’m wrong.

I informed her that I will be sleeping in the couch during the weekdays. She replied that I was doing this to punish her because I know how much she enjoys kissing me on the forehead every time she wakes up.

I told her that it had nothing to do with that. I just can’t function with 5 hours of sleep and reminded her that it also affected me at my job significantly. She reluctantly agreed to apply them outside the bedroom but she was visibly upset.

I prepared a nice bubble bath for her with candles and made her dinner and this morning I took her to a restaurant she liked for brunch. We had a good time but I can clearly see that she’s still a little bit upset even though she’s trying to hide it. Was I really wrong to ask her to stop because I’m starting to feel like an a**hole and I h**e seeing her like this.”

This reader said this guy is NTA and that this isn’t a very big compromise for his GF.

Another individual agreed and said she and her husband have an arrangement because of something like this.

And this Redditor also agreed and said this is not such a big deal. 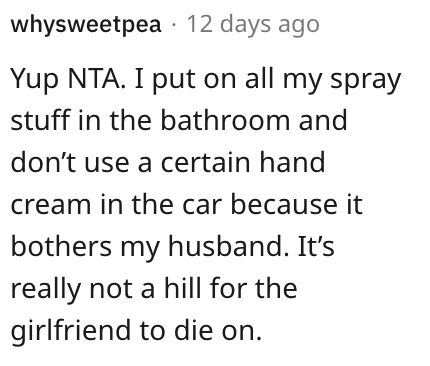