Man, it seems like people are getting kicked out of houses and events left and right on Reddit’s “Am I the A**hole?” page…

But each story is different…so let’s see what happened here and if this guy was out of line for giving his sister the boot.

“Some feel I (32M) should’ve handled the situation but I don’t see how I’m wrong.

Me and my sister (37f)are not as close as we used to be because of some messed up stuff that happened years ago. I had my son Jesse (9) pretty young. Months after that to my surprise my ex was pregnant again. Only I knew it wasn’t me because having an infant to take care of and provide for left me with zero interest in s**.

And we found out it was my sister’s fiancé -ex now -that she was seeing behind our backs. It hurt. Worst pain ever but for my son’s sake I tried to get past it. I come from a family of half sibs too so I wanted my son to be close to his half brother (Keith).

Surprise, not only were they (my ex and my sister’s ex) horrible lying cheaters, but also terrible parents. Both got hooked on drugs, only escalated from there. He got locked up when Keith was 3. This particular issue with my sister happened a couple years ago: My ex got sick, she was scared of Keith ending up in foster care like her and I didn’t want that for him either.

I legally adopted him before she passed when he was 6. Not everyone in my family was on board at first but he’s the kind of kid that is hard not to love so they warmed up to him. My sister never did. She h**ed that I brought the son of her ex fiancé into my family. And I understood why it was painful but Keith’s and Jesse’s best interest were my main priority.

That’s how we drifted apart. Last weekend was my birthday and had a small barbecue at my place. My parents have tried hard to mend things between us so they convinced me to let her come too so we can chat. I thought that meant she was cool with Keith because obviously the 3 of us are a package deal.

I asked my parents how would she feel about Keith, they said not to worry about it. Again I took it as she came around. Only she wasn’t told he would also be present. But how could he not be? He lives there.

My sister got there and she was mad when she saw him . She very specifically said “I thought this was family only what’s he doing here.” Loud enough where he could’ve easily heard but thankfully he was playing with his brother.

My sister was pi**ed because my parents told her Keith wouldn’t be around. And I got pissed when she told me she didn’t want him here expecting me to do something about it. So I just told her to leave, and she’s not welcome here then. There was some back and forth from her and my parents. I didn’t want that kind of talk around my sons so still made her leave. My mom seems to think I was a huge a**hole for kicking her out of my party instead of trying to work things out.

Like they take Keith somewhere out of site while me and her talk. But to me, what’s the point of us working it out if that’s how she still feels toward my son? Well this is still causing some conflict since I “escalated” the feud by making her leave instead of actually talking to her.

This person said this dad is NTA and that this kid is just an innocent child. 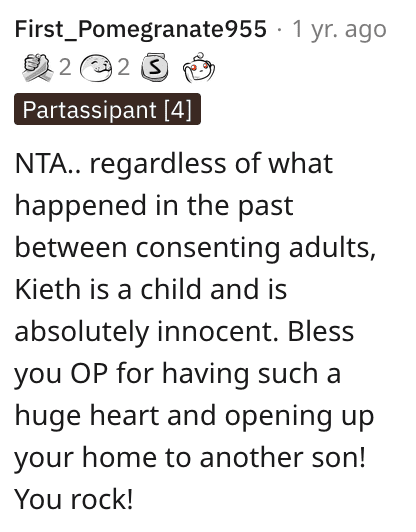 Another individual made a good (and sad) point… 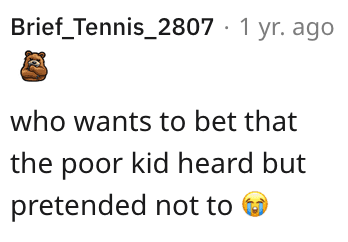 And this Reddit user said he’s NTA and made a good point about this situation. 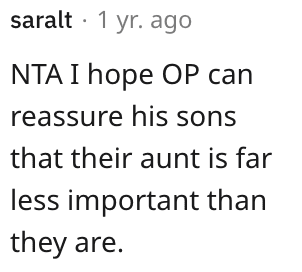