That’s why you gotta watch your mouths, fellas!

But, let’s read the whole story from Reddit’s “Am I the A**hole?” page before we pass judgment, okay?

I’m finishing up the final parts of my STEM BSc (computer science, working on mobile application development), and she’s in the 3rd year of studying for a doctorate in a Humanities and will get her Phd in Sept. It’s a university city so politically active and Clara is active there, does a lot of organising, demos and protests etc: FYI we align the same politically so this isn’t an issue, I’m describing what she does.

If you know computer science dudes, you’ll know we like to joke around a lot. Last year, I had to repeat classes and I was with students a few years below me, who saw photos of me and Clara on my phone bg. Clara is objectively very pretty, and it’s something I can be insecure of.

So I, jokingly, said she was my trophy wife, and made some dumb blonde type jokes about her being “no thoughts head empty” and “proof you are either pretty or smart”. If you know guys, you know inside jokes, and my trophy wife became a meme in the STEM underclasses, my friends even made me a mug that said “every developer needs a trophy wife”.

But last week I took Clara to a mutual’s party and the CS underclassmen were there. They straightaway started joking about finally meeting the trophy wife, and she got offended and said something snippy like “you know I’m doing a Phd and organised X strike to pressure the college for money for YOUR department right?” (I know this as I had told her abt the issue so she pressured the college).

My friend was d**nk, and laughed at her and said he didn’t know that, but a degree in CS is worth more than “reading books and acting like MLK” and to my horror said something like “OP, you were right, she is a trophy wife”. Clara, who is mixed race, seemed to take offence at the first statement, but left the group and ignored me totally.

At home, she rounded on me and I immediately said sorry, the MLK comment was wrong, I’ll speak to him. She said to forget that, and asked me what the f**k I meant by trophy wife. I explained the backstory, a bit badly as I was drinking.

She asked why I didn’t defend her from the comments about her degree, but I said that everyone thinks their course is the best and she shouldn’t overreact. She told me I was a p**ck, then gave me the cold shoulder till now.

I feel like an AH because I didn’t think she’d be annoyed by trophy wife jokes. She is aware she’s pretty and is confident about it so I don’t know why she’s reacting badly.

I accept the MLK comment was rude, and my friend apologised the next day. But the trophy wife stuff was just jokes, most people in her community knows her well, she never interacts with STEM students so I didn’t think their jokes mattered.

Maybe this is an “academia” thing I don’t know about since I’m aiming to work in an industry? If I messed up, I want to apologise, but I can’t see how this was more than a joke gone sour.”

This reader said there’s no doubt this guy is a total a**hole. 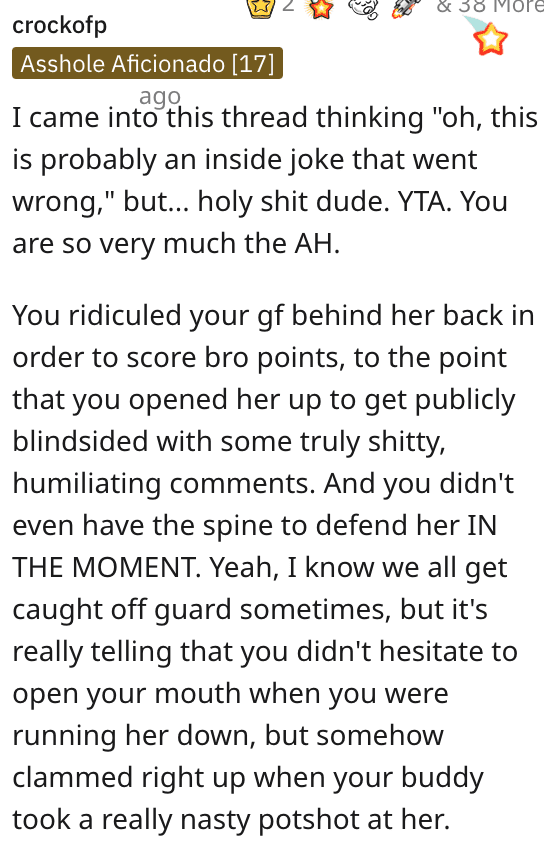 And another individual had an interesting take on this situation. 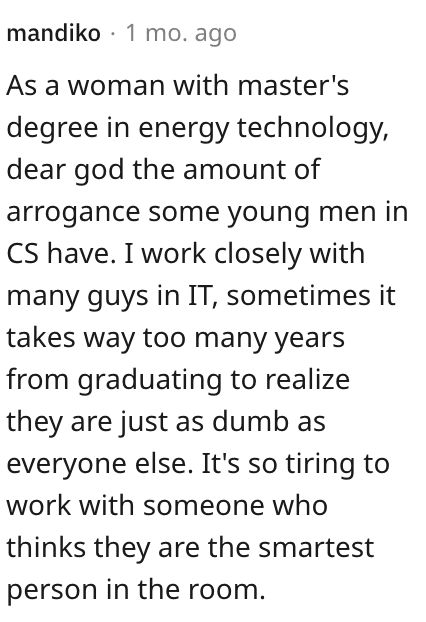 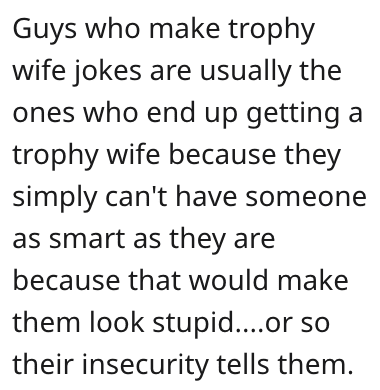