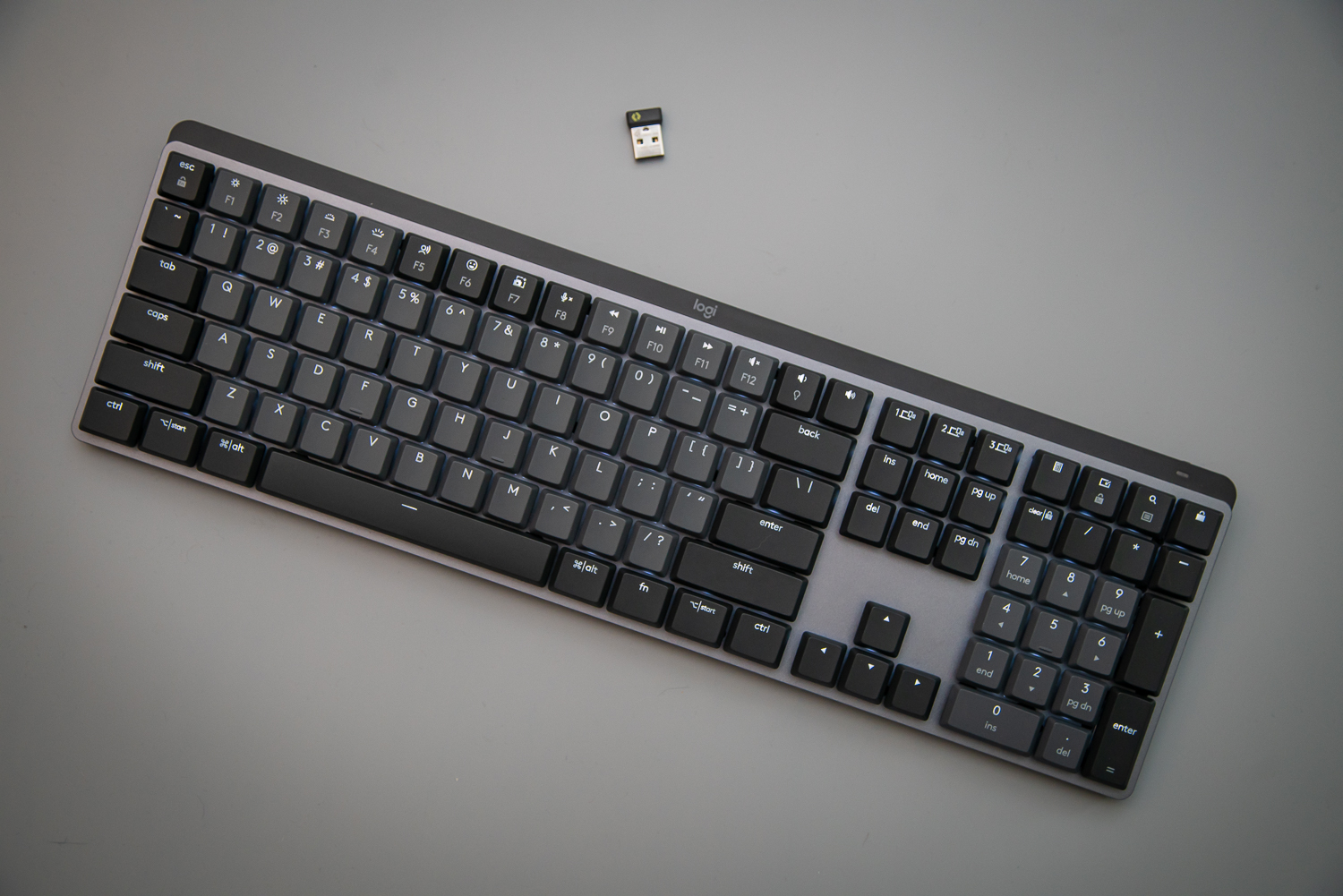 “The Logitech MX Mechanical keyboard should be the centerpiece of your next desktop setup.”

The Logitech MX Mechanical fills a gap that has plagued mechanical keyboards for years. You want a true mechanical typing experience with the slim form factor of Microsoft’s Surface Keyboard, but all you could find are RGB gaming keyboards that may provide a great typing experience, but lack the functionality. look good sitting at the desk.

It’s not the first low-profile mechanical keyboard, but it’s the first we’ve seen from a consumer peripheral brand like Logitech. The price is a bit steep and the software could use more features, but the MX Mechanical’s sublime typing experience earns it a spot among the best keyboards out there.

Expensive but not obvious

Logitech’s high-end peripherals are expensive – there’s no getting around it. The MX Mechanical doesn’t buck that trend, but you still don’t feel like you’re wasting any extra cash. Logitech has two versions available at slightly different price points: the full-size MX Mechanical for $170 and the 75% MX Mechanical Mini for $150.

The main competitors are Low-profile Keychon K3 and K7, both of which are about $50 less than Logitech is asking. The K7 also supports hot-swappable switches, so you can adjust the keyboard feel down the line or swap out some switches if they break down.

What works in Logitech’s favor is that the MX Mechanical works with other Logitech peripherals, and it unlocks some productivity features that aren’t present with brands like Keychron. Don’t get me wrong: the MX mechanical keyboard is expensive. But given that Logitech’s gaming-focused G915, which is very similar to the MX Mechanical, sells for $60 more, the price doesn’t seem quite as daunting.

Three devices at once

One of the most exciting things about the MX Mechanical is that it can switch between three devices almost instantly, no matter what operating system you’re using. You can connect with the pre-paired Logi Bolt dongle (a newer dongle for keyboards like the Logitech Pop Keys) or Bluetooth, and you can switch between the systems either with a trio of dedicated keys on the board or via the free Logi Options+ software.

I’ve paired it to my desktop with the Bolt dongle and Bluetooth on a laptop and tablet, and there’s never been more than a second or two of delay between switches. One downside here is that the flatbed MX Mechanical doesn’t have a wired mode. It works via wireless when plugged in and charging, but you can’t ditch Bluetooth or dongle for a direct wired connection.

The dual support for Windows and MacOS is a huge advantage for the MX Mechanical.

Even cheap mechanical keyboards like the Akko 3068B work on various connections at the press of a key, but the big advantage for dual connections is Logitech Flow. With a compatible mouse, you can switch between Windows and macOS just by dragging your mouse, as well as transfer files or text. It works on up to three devices, with Windows or macOS.

The keyboard supports Windows, macOS, Linux, iOS, iPadOS, Chrome OS, and Android alone, but Flow is limited to the two main types of desktop operating systems. The dual support for Windows and MacOS is the main advantage of the MX Mechanical, however. Unlike the Keychron Q1, the MX Mechanical recognizes the operating system you’re using and automatically changes the layout.

More than a backlight

It’s adaptive, so the ambient light sensor inside the MX Mechanical will automatically adjust the backlight based on how much light you have in the room. This is a key component that allows the MX Mechanical to achieve 15 days of battery life and a full 10 months with the backlight off, according to Logitech. I don’t have 10 months to wait for a keyboard to die, but I’ve been using the MX Mechanical intermittently for about three weeks, and my battery is at 50%. Bring a USB-C cable with you when you leave the house just in case, but you shouldn’t need to charge the MX Mechanical often.

The lighting has some nice touches in addition to being adaptive. It lights up when you put your hands on the keyboard, for example, which is a novelty that I never tire of (even after three years with the Nvidia Shield remote control and its proximity sensor). Logitech also uses the backlight to call up important information, like a brighter light on your currently paired device when you turn on the keyboard.

The MX Mechanical isn’t a G915 with the gaming bits ripped out, and a few minutes of typing on it makes that clear. It uses Kailh Choc switches like the G915, but the V2 versions of the MX Mechanical come with a standard cross-stem so you can swap out the keys if you want. Logitech gives you Tactile Quiet (brown), Linear (red), and Clicky (blue) switches to choose from, and I chose the Tactile Quiet option which comes with 45 grams of actuation force, 1.3mm to reach the actuation point and 3.2 mm of the total distance traveled.

These low-profile switches have the same force as their full-size counterparts, but the travel distance is much shorter (0.7mm less actuation travel and 0.8mm less total travel). This completely changes the typing experience compared to full size switches like those on the Azio Izo keyboard. It’s snappy, as if Apple’s Magic Keyboard is coated in a layer of mechanical goodness.

Quiet Touch Switches have a traditional feel, but they’re not exactly quiet. They’re not loud, like the click you’ll find on the Clicky option, but they do have a hollow, thick sound when you type. It’s extremely satisfying for typing, and I found myself wanting to type just to use the keyboard more. Most mechanical keyboards focus on gaming first (like the SteelSeries Apex Pro Mini), but the MX Mechanical is one of the few mainstream options focused on typing first.

I didn’t count it for the game, although I probably should have. Flat keys mean there is little distinction between lines, causing multiple slip-ups in Destiny 2 and my recent addiction, Neon white. It works for gaming, but you might need to make your own keyboard for something that looks like the MX Mechanical but works like a G915.

Simple is not always better

Logitech wants the MX Mechanical to be powerful and simple, which is evident the first time you load up the Logi Options+ app. It walks you through the keyboard’s unique elements – the three device buttons, different backlight options, and even some special function keys like a dedicated emoji key and mute button for meetings. Simplicity is great, but the MX Mechanical takes it too far.

You cannot bind most keys. Options+ allows you to link your function keys, the grid between Insert and Previous page, and four keys on top of the keyboard, but that’s it. Key remapping is a standard feature for several Logitech keyboards, so it’s odd that it’s no longer available on the MX Mechanical.

It’s even weirder considering the options you have for the few keys you can remap. You can bind them to keyboard shortcuts, operating system applications such as the calculator, and functions such as minimizing the active window. You can even customize the keys for specific apps (however, you receive the same list of actions regardless of which apps you use).

Options+ also lacks macro recording and linking. The list of actions in Options+ is pretty extensive, but the fact that you can only rebind certain keys seems like an unnecessary hindrance to what is otherwise an excellent software experience.

The Logitech MX Mechanical keyboard is designed to keep you productive. Flow is a big plus if you have an MX mouse, and the updated low-profile switches provide one of the best typing experiences you can get over $200. The price stings a bit with the lack of options in Logi Options+, but the premium is worth it if you have other Logitech peripherals or need to switch between Windows and macOS often.

Yes, but they are rare:

The low-profile mechanical switches have a lifespan of 50 million keystrokes, so you can enjoy years of the MX Mechanical before you need to replace it. Unfortunately, it doesn’t have hot-swappable switches like the Keychron K7 or K3, so you can’t extend life with a line-wide switch swap.

Yes, especially if you have a mouse that supports Logitech Flow or switch between devices often. You can get a similar typing experience for less with something like the Keychron K3, but no other peripheral maker has the same combination of features that Logitech offers with the MX Mechanical.

Galaxy Z Fold 4 review: so good it should be your next phone

Tower of Fantasy beginner’s guide: 9 tips and tricks to get started

The 7 best printers for college students