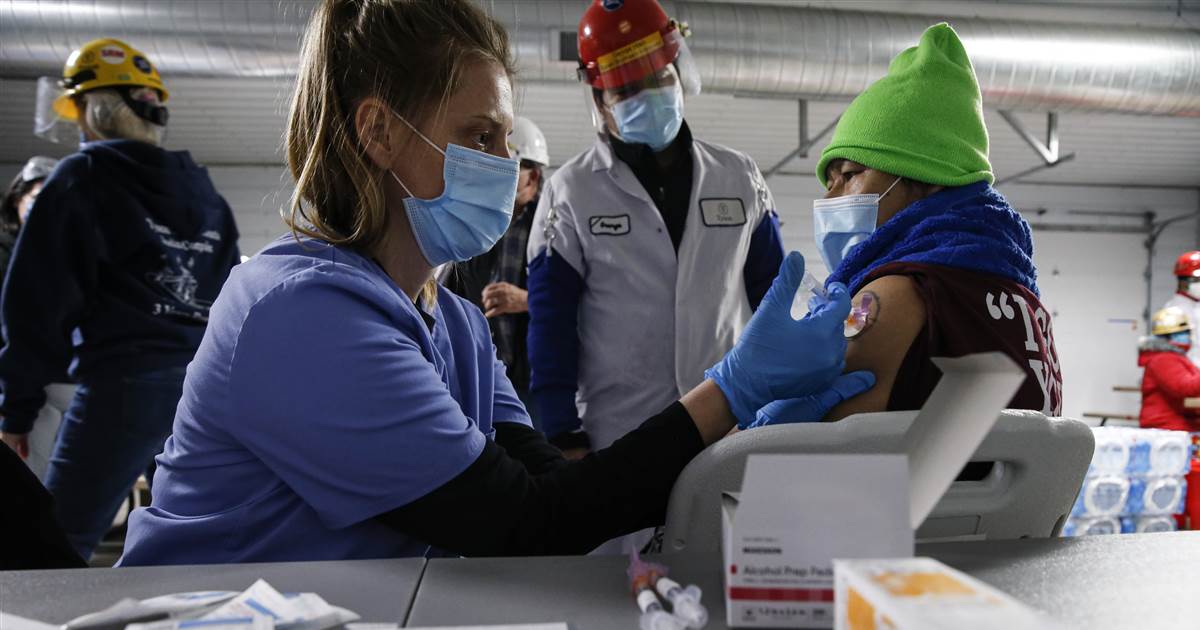 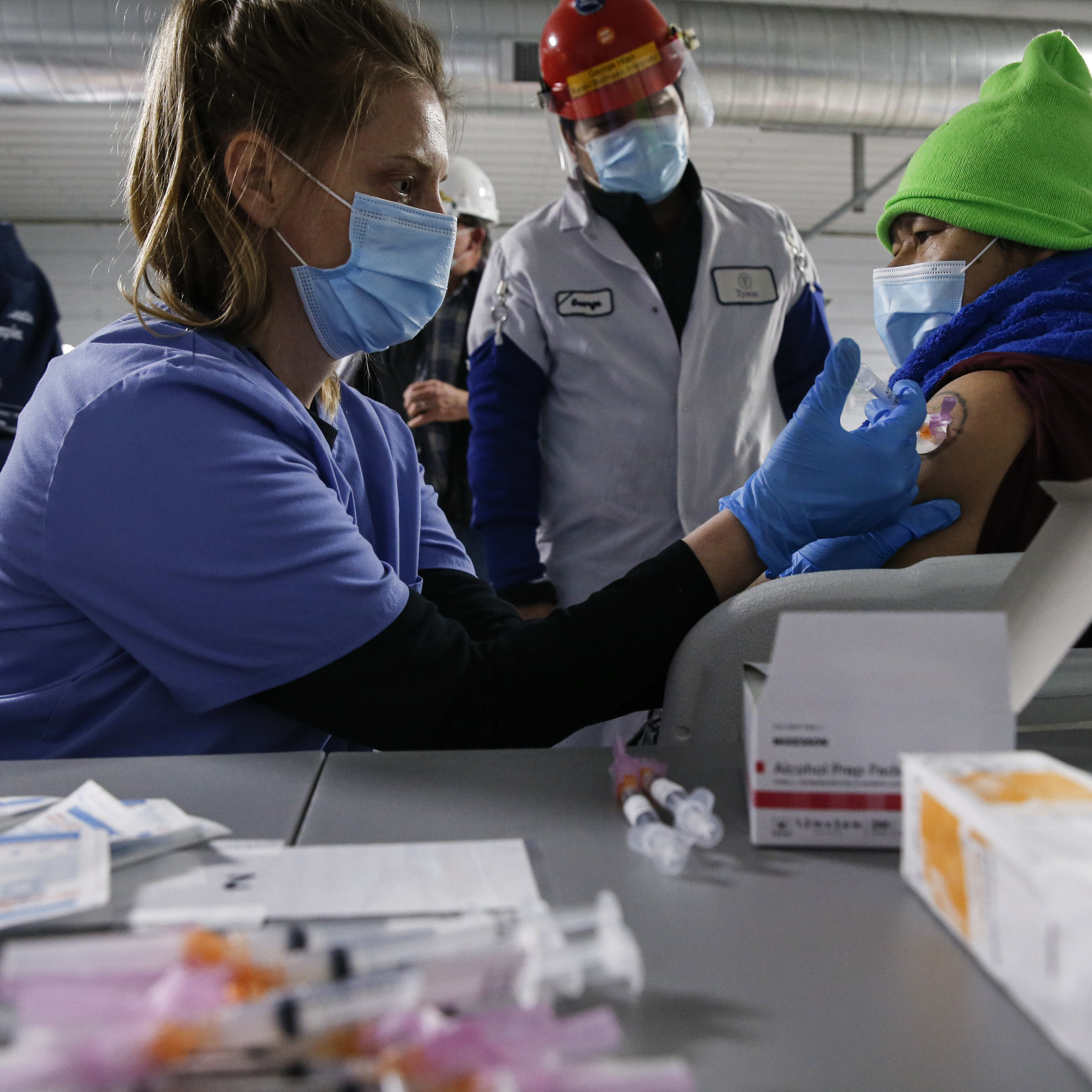 Throughout the pandemic, R.S., a janitor at Tyson Foods in Dakota City, Nebraska, has been working 17- to 18-hour shifts to keep the building clean and safe for her fellow employees.

The 39-year-old, who immigrated to the U.S. from El Salvador in 2015, has worked at the meatpacking plant since September 2018. When Covid-19 first began to spread throughout the country last spring, she said the plant and its employees were unprepared for the impact the virus would have.

“Everyone thought, ‘No, not here.’ People were in denial. They didn’t want to use the masks, back when it wasn’t obligated but rather optional,” said R.S., who didn’t feel comfortable talking publicly about the company using her full name. “Just in the area where I work, about five people died.”

The plant briefly paused production last May to deep clean the facility after a number of employees tested positive for the virus.

R.S. said that conditions had drastically improved inside the plant since the outbreaks last spring.

NBC News reached out to Tyson Foods to learn more about how many of its employees were affected by the virus, but a company spokesperson declined to comment on the numbers.

The company said in a statement that it is “taking care of our team members,” and they “continue to do our best to stay ahead of this challenging and ever-evolving pandemic.”

Local reports, published last spring but not independently confirmed by NBC News, stated that 786 employees had tested positive and four employees had died from Covid-19.

As Nebraska works to improve conditions for employees of the state’s many meatpacking plants, public health officials have set their focus on vaccination.

“I am very afraid”

R.S., who is the main provider for her family of five and helps support her mother back in El Salvador, is scared to take the Covid-19 vaccine.

“I am very afraid because I am the one that sustains my family,” she said. “If I get sick, if something happens to me, who is going to look after them? I start to think, if I get that vaccine and I die, what am I going to do? What are my kids going to do?”

R.S. said much of her information regarding the Covid-19 vaccine comes from Facebook, which has been slow to react to misinformation surrounding the virus and the vaccine. She said many of her colleagues and friends have similar concerns and don’t plan on getting the vaccine once they are eligible.

Public health officials and community advocates are working to combat this hesitancy, targeting outreach efforts aimed at the mostly immigrant Latino community. These include Q&A events hosted through their social media accounts, where participants are able to raise questions and concerns with local health experts.

Roxana Cortes-Mills is a managing attorney at the Immigrant Legal Center in Omaha, a nonprofit law firm that works with low income immigrants in Nebraska. She said her firm has been using the education wing of the organization to host virtual events with local medical providers.

The organization also staffs a legal assistance hotline that answers questions about the safety and efficacy of the vaccine, and reassures callers that immigration status does not prevent access to the vaccine.

“We’re also working on creating … informational materials that can be shared with the community so they can have their questions answered,” Cortes-Mills said,

Public health officials are worried about these trends, because Latinos have been disproportionately affected by Covid-19 — they’re three times as likely to be hospitalized and more than two times as likely to die from Covid-19 compared to non-Latino whites, according to recent data.

A place of “trust”

While immigrants make up 17 percent of the U.S. workforce, they make up 22 percent of all U.S. food industry workers and 37 percent of meat processing industry employees, according to the Migration Policy Institute.

“We want to keep encouraging our … immigrant families not to get left behind [throughout] this pandemic,” said Karina Perez, executive director at Centro Hispano, an immigrant advocacy organization in Columbus, Nebraska.

Perez explained it’s imperative that public health officials work with trusted organizations like Centro Hispano, especially when it comes to debunking misinformation about the virus and vaccine.

The most common questions are about how effective the vaccine is and what are possible symptoms after getting it. The organization has been distributing Spanish-language flyers created by the University of Nebraska Medical Center that cover a range of topics, like the importance of getting vaccinated and wearing a mask, even after getting a vaccine.

“We have had clients who have had their questions assured and have ended up registering for the vaccine,” Perez said.

Centro Hispano is hosting a vaccine registration drive for clients at its Columbus office on March 14, and the staff will be helping people sign up to be vaccinated.

“We are hoping that this will allow them to go to a place they trust and register, with assistance,” Perez said, noting that the drive will begin in the morning and end in the late evening.

“We’re hopefully going to see a trend upward of getting more vaccinations,” Perez said. “They’re not signing up, and I think that’s something we’ve seen as a trend nationwide.”

When the state’s vaccination website was launched, it was only in English. Now, vaccine information is available in both English and Spanish and call centers are staffed with bilingual employees.

Sepers said the health department has been working directly with meatpacking plants to understand the reasons behind the reluctance to get the vaccine, helping them tailor culturally appropriate messaging in Spanish.

“Trust is integral to this process,” said Sepers, “so using native-language medical providers to discuss vaccine safety is an important component of that discussion.”

Nebraska Gov. Pete Ricketts may have hindered efforts to reach the state’s immigrant communities after he said at a news conference in January that undocumented workers at the state’s meatpacking facilities would not be included in the state’s vaccination rollout.

The governor’s office quickly walked back those comments, clarifying that the state’s vaccination plan would instead prioritize citizens and legal residents. But advocates said his comments were enough to amplify fear and confusion in Nebraska’s immigrant community.

Goal is “to put needles in arms”

Dulce Castañeda, an organizer with Children of Smithfield, a Nebraska-based advocacy group, said many plant employees in her community of Crete — regardless of their legal status — were already wary of the vaccine rollout plan; she said the governor’s comments only made them more distrustful.

“There’s still some trust issues as to whether or not it’s safe and effective and there’s … a lot of people hesitant to get the vaccine,” Castañeda said. “When you have a person like the governor of Nebraska who is in a position of power and who is sending the message that people who are undocumented are not eligible for [the] vaccine — I think it’s damaging and it creates even more fear.”

Advocates throughout the state say they are continuing their outreach to quell any fears surrounding the process.

“Our goal is really just to put needles in arms,” Sepers said, noting that his department only collects the necessary information to make sure residents come back for their second dose of the vaccine.

Cortes-Mills said that getting the vaccine is a benefit to the Nebraska community at large. “The more people we vaccinate, hopefully the sooner we’ll be done with this pandemic.”