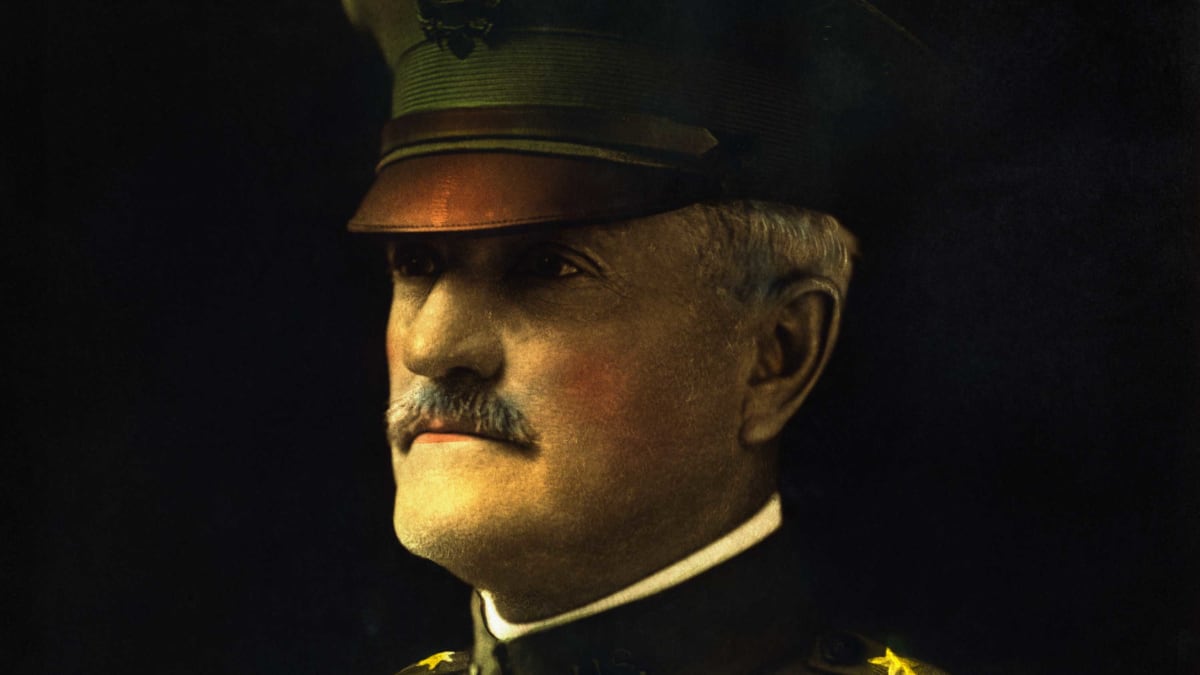 General John Joseph “Black Jack” Pershing began his rise through the ranks of the United States Army with distinguished service in the Spanish American War and in the Philippines. After leading American forces in pursuit of Mexican revolutionary Pancho Villa, Pershing served as commander of the American Expeditionary Force (AEF) during World War I.

Beginning of life and launch of military career

Pershing was born in 1860 near the small Missouri town of Laclede. While still a teenager, he got a job teaching at a school for African-American students. After seeing an advertisement for the US Military Academy at West Point, Pershing applied and was accepted in 1882. He graduated four years later, placing 30th in a class of 77.

Pershing spent the early years of his military battles in the American campaigns against the Apache and Sioux Indians in New Mexico, Arizona, and other western outposts. In Montana, he was promoted to first lieutenant of the 10th Cavalry, becoming one of the first white officers to command an all-black regiment. Pershing often expressed his praise and admiration for the black soldiers he commanded, which may have earned him the nickname “Black Jack,” although an alternate theory claims this was due to his strict attitude towards discipline.

Service in the Spanish American War and in the Philippines

After spending several years teaching military science and tactics at the University of Nebraska (where he also earned his law degree) and returning to West Point as an instructor, Pershing traveled to Cuba to fight in the Spanish-American War. In 1898, he and the 10th Cavalry Regiment fought bravely in the Battles of Santiago and San Juan Hill alongside Theodore Roosevelt and his “Rough Riders”. Pershing was awarded a Silver Star for his service and was promoted to the rank of captain.

After the United States’ victory in the Spanish-American War, Pershing sailed for the Philippines, where he led American soldiers in repeated efforts to subdue the rebel Moro tribes. In 1906, Roosevelt (now president) promoted Pershing to the rank of brigadier general, placing him on top of more than 800 other senior officers.

Personal tragedy and role in the pursuit of Pancho Villa

After another tour of the Philippines from 1906 to 1913, Pershing returned to the United States, where he was stationed at the Presidio in San Francisco and placed in command of the Army’s 8th Brigade. In August 1915, while Pershing and his men were on a mission in Fort Bliss, Texas, to defend the southern border from attack by Mexican bandits, a fire broke out at the Presidio. Pershing’s wife, Helen Frances, and her three daughters died from smoke inhalation; only her son, Warren, survived.

Devastated by the loss, Pershing embarked on his work. In March 1916, President Woodrow Wilson assigned him to lead an expedition of nearly 12,000 troops to Mexico in pursuit of Pancho Villa, a Mexican revolutionary whose forces had recently attacked the city of Columbus, New Mexico. Pershing’s forces were limited by the reluctance of the United States to incite war with Mexico, and although Villa remained at large after nearly a year of pursuit, Pershing earned Wilson’s praise for his handling of shipping.

Leadership in the First World War

After the United States entered World War I in 1917, Wilson bypassed five other majors generals to appoint Pershing commander of the American Expeditionary Force (AEF). The US armed forces grew rapidly during the conflict, and Pershing was tasked with transforming some 2 million relatively inexperienced soldiers into a professional fighting force. Shortly after arriving in France with the first AEF troops in June 1917, Germany defeated Russia, freeing large numbers of German soldiers to confront the Allies on the Western Front.

Although French and British officers wanted to immediately absorb AEF troops into their units, Pershing insisted on keeping the Americans under a single, unified command, even as the Germans pushed forward with a spring offensive. in 1918. But when American troops entered serious combat in May, they had an immediate impact, pushing back the Germans in key battles at Catigny, Chateau-Thierry and Saint-Mihiel. The Allied victory in the Meuse-Argonne offensive led Germany to demand an armistice, ending the war on November 11, 1918. Pershing argued against the armistice, believing that fighting should continue until Germany surrenders unconditionally.

When Pershing returned home, Congress made him only the second person (after George Washington) to be honored with the rank of “General of the United States Armies.” As America’s greatest war hero, he was seen as a possible president, but failed to win the 1920 Republican nomination. He served as the chief of staff of the United States Army in 1921 to 1924 and remained a respected adviser on military matters for decades.

In 1932, Pershing won the Pulitzer Prize in history for his two-volume memoir, My experiences during the world war. When World War II broke out in Europe, President Franklin D. Roosevelt appointed Army Chief of Staff George C. Marshall, one of the many young military leaders Pershing had commanded during his career. Others included George S. Patton, Douglas MacArthur, and Dwight D. Eisenhower.

In 1946, at the age of 85, Pershing secretly married Micheline Resco, a much younger Franco-Romanian artist whom he had met in Paris during World War I and with whom he was quietly involved for almost 30 years. . He died on July 15, 1948 at the age of 88.

Andrew Carroll. My comrades in arms: General John Pershing and the Americans who helped win the Great War. (Penguin Press, 2017)