Is Woman Wrong for Telling Siblings It Would Be Awkward to Have Them at Her Wedding?

Family is complicated. There are good families, bad families, and literally every kind of family in between. Our families love us, they embarrass us, they hurt us, they support – only the people who know you better than anyone else be all of those things at once.

Weddings seem to amplify emotions and tensions, so you can probably understand how a group of siblings might take offense at being told it would be “too awkward” to have them as guests.

That said, as with most of the cases on the Am I The A$shole thread, you’ll have to read all of the details before you come up with a concrete opinion.

AITA for telling some of my siblings it would be too awkward if I invited them to my wedding?

Anyway, when I was 9 my dad and mom died in a car accident leaving all of us without parents. My stepsister took her biological siblings in, and our grandparents helped her, but they left me and my brothers to go into foster care and did not keep in touch with us. They also did not let us keep in touch with our siblings. When I turned 18 I, along with my brothers, reached out to our other siblings, only to be told it would be too weird and awkward to reconnect after everything. It hurt I’m not going to lie. I spent so many years excited to see them again and they rejected us.

Last year my brothers reconnected with them but I didn’t. They didn’t show that much enthusiasm then either but when I announced my engagement they got more interested and have tried since. But they have also asked me straight up about inviting them.

My reply was it would be too weird and awkward to have them there after everything.

They said I am being really unfair to them and we’re still family.

Yeah, but I want to know they give a shit and not that they want a fun day out because they only seemed to be invested now, after the wedding announcement.

The comments are as complicated as the family involved, but most people agree that no one owes anyone a wedding invitation, family or not. 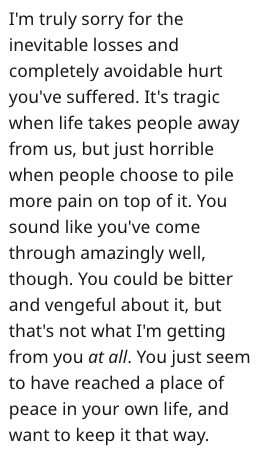 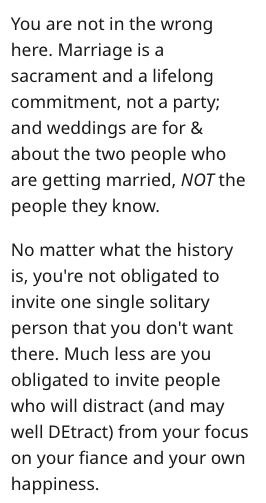 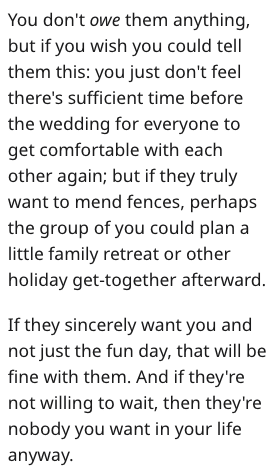 Others pointed out that she should be proud of all she has overcome and accomplished in her life, no matter what.

There’s one way to find out why they’re so into you now. 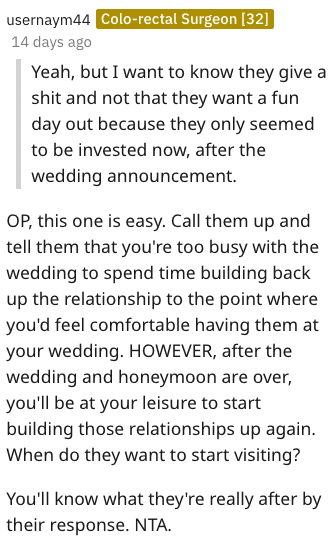 Others feel like even if the wedding doesn’t have to happen, OP should give her family another chance. 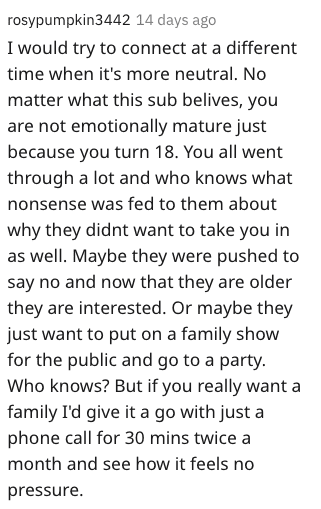 But the bottom line is, she might have to be prepared to move on. 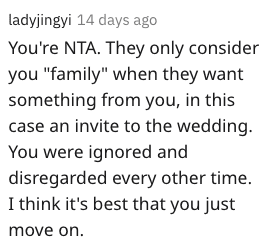 I agree with all of the responses, and hope that if there are any among the siblings who want a relationship, they find a way to forge one in the future.

What’s your take on the whole thing? Share your opinions with us in the comments!