Is This Woman Wrong For Banning Her Partner From The Delivery Room?

Giving birth is one of those things that’s intensely personal, but that also necessarily involves other people (on occasion). Most women are hopeful about having a supportive partner there for the delivery, but what happens when you realize during a pregnancy that your partner is anything but?

This couple has been arguing for some time about what to name their daughter. Her husband’s family has a tradition in which the name is picked out before birth and then stitched on a blanket.

So, even though OP wanted to wait until she met her daughter to choose a name, she was willing to choose ahead of time.

I (29F) and my husband (30M) have been together for 8 years. I am now 8 months pregnant, almost 9 with a girl. In my husband’s family, there is a tradition of naming a baby before it is born.

The name is embroidered onto a blanket that has been passed down from generation to generation, and the baby is wrapped in the blanket when it is born. I’m trying to come up with a name we both like, but some of the names he suggests do not resonate with me.

The only problem is that they just cannot agree. They want the name Beatrice after a family member and she really wants to honor her late sister, Jessica.

My husband has been getting annoyed with me lately and telling me to just pick a name for the baby. As his grandmother’s name was Beatrice, he wants to name her that, but I just don’t like it. I wanted to have a list of names so that when I see her I can name her after what I think is appropriate. Although it can sound odd, I wanted to see her before naming her but have decided not to so that he can please his family.

In honour of my late sister, I want to name her Jessica. That was her name before she passed away from a heart attack. It means a lot to me, but I hadn’t told him that particular name because I didn’t want to hear any insults about it. Every time I suggest a name he’ll attack it, calling it ugly in a variety of ways.

Things did not go well when she mentioned her sister’s name, causing a huge argument between OP and her mother-in-law.

Today his mother was pressuring me to suggest a name, and I just blurted out the name Jessica. After a pause and a laugh, she said it was a name for a large girl, and it was a very unsuitable name. She went on to ask me if I wanted the baby to be ugly and if I was trying to ruin its life before it was even born.

Initially, I was overwhelmed with anger and asked her to stop talking, more harshly than I should of, as she didn’t have the right to imply others are ugly when she herself is no Beyonce.

Annoyed, she told me to leave her house. Not wanting to cause a further argument I left, and when I returned home my husband explained to me that he was extremely disappointed in my actions and that he couldn’t look at me.

When she arrived home, her husband was firmly on his family’s side. Awhile later, his sister arrived to inform OP she’d picked out the baby’s name.

As he is close with his sister, he struggled with his frustrations with her, which she then did to her mother. The next day she was at my doorstep and told me that she decided on a name. and then said my decor was tacky, She said she was naming the baby Connie, after her mother.

It was a name neither I nor my husband picked, and wouldn’t cause an argument between us. I told her no and asked her to leave and eventually, she did, but not after some insults were issued to me.

I asked my hubby about it, and he said I have no right to speak about any of this, as I also have not been open to the names that he suggests. He then said that I was incredibly selfish, and said I should go.

OP finally left to stay at her sister’s, and is now considering keeping the entire family out of the loop during the birth and beyond.

I packed my things, then went to my older sister’s house. She was fuming at my husband, and how they insulted our younger sister’s name.

He’s been trying to contact me for a few days now, apologising, but I don’t want to speak to him.

I’ve also decided that I’m not telling his family when I go into labour, and if I must I am not allowing them anywhere near me while I’m birthing the child.

Does Reddit think OP is overreacting to a name choice?

The top comment does not think OP is wrong at all, but also offers a possible solution in the form of an olive branch. 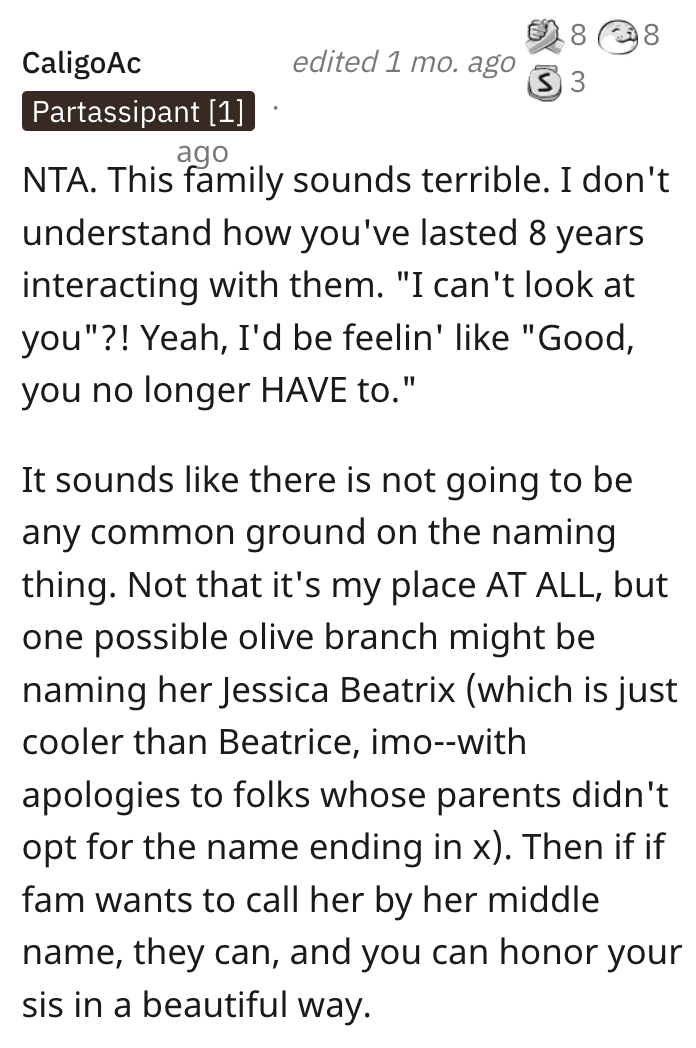 There is actually much evidence that being named Jessica does not doom a person to being ugly or fat. 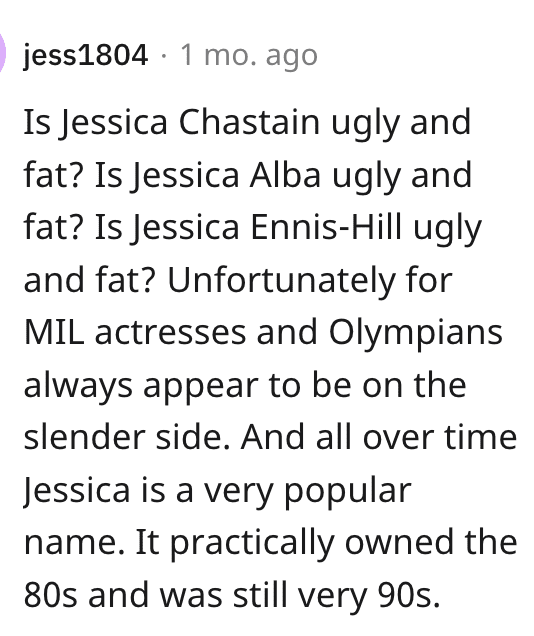 They definitely have an issue with the father in this scenario. 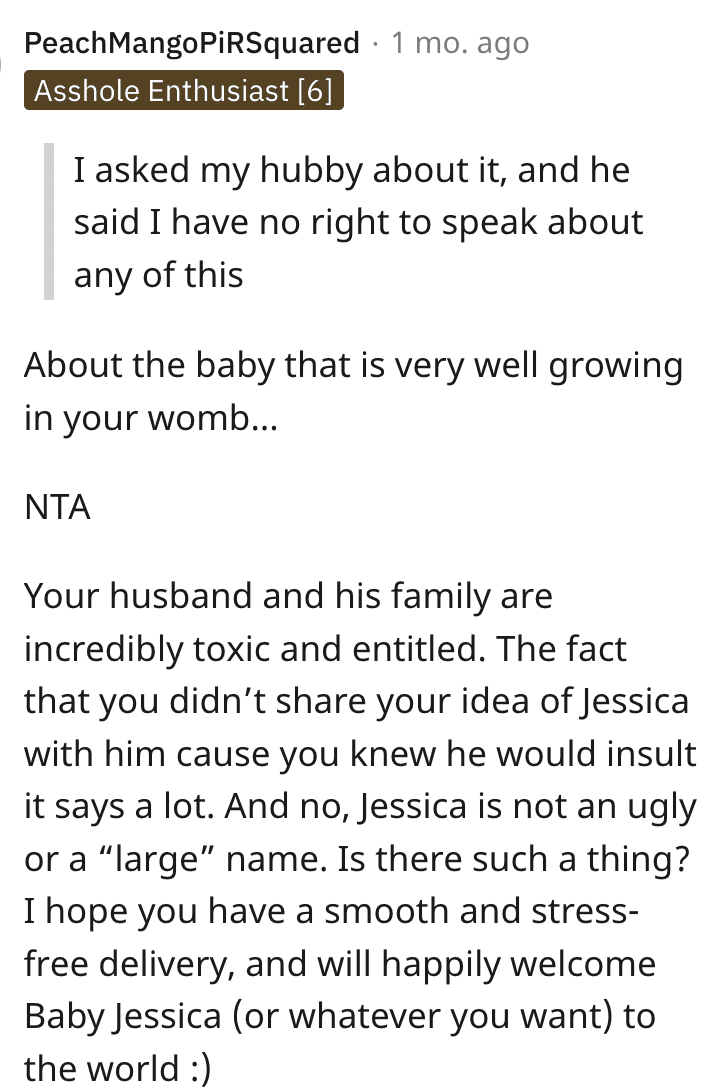 And as OP is carrying the baby, she absolutely has a right to an opinion about the name. 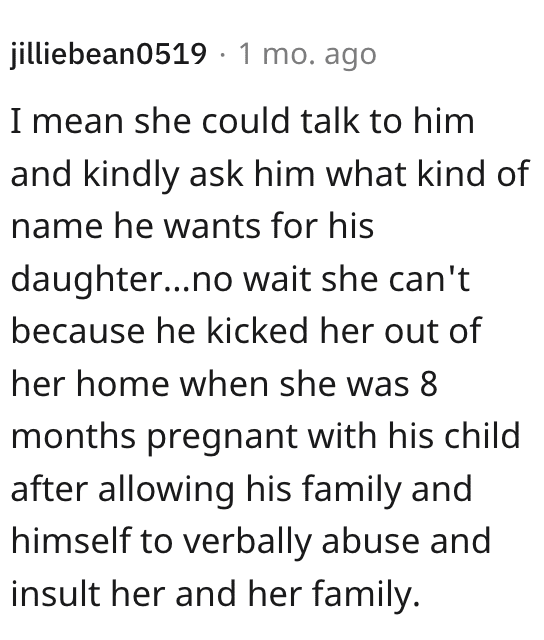 There definitely seem to be some Mommy Issues going on here! 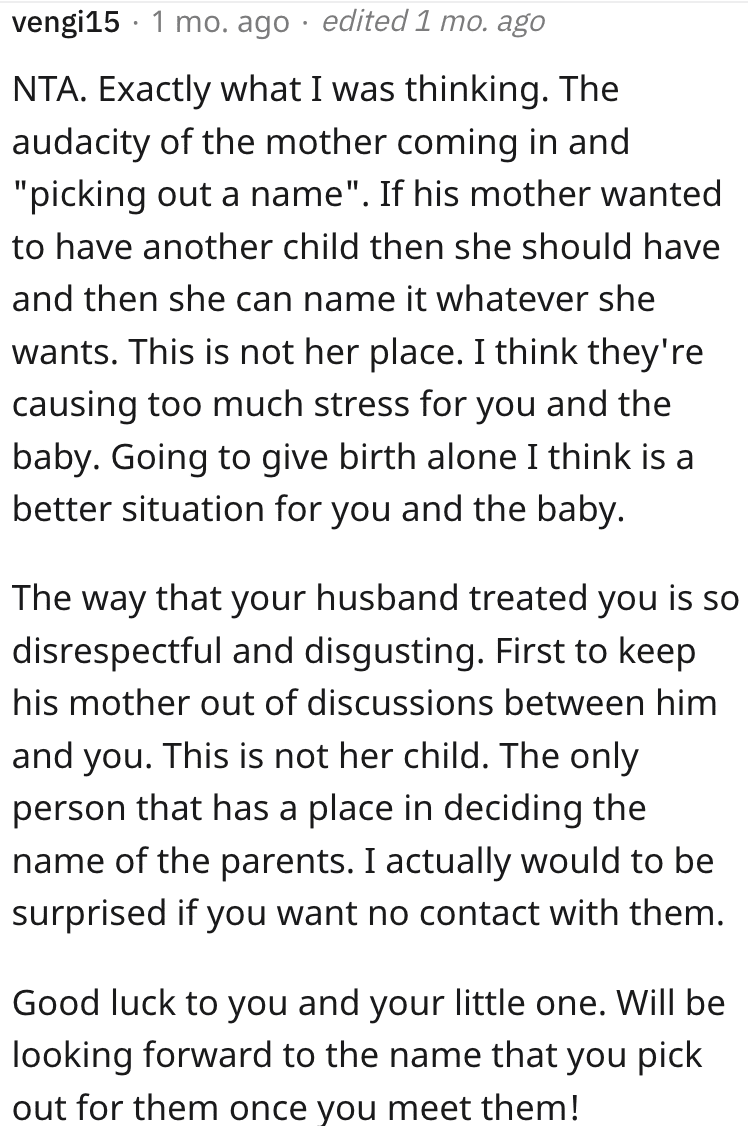 Do you think everyone is overreacting over a name? Should OP offer that olive branch?

Let us know in the comments!