Is This Person Wrong for Making Their Sister-In-Law Pay More Than Average Rent? People Responded.

I’ve said it many times before but it’s time to say it again…finances make things really complicated between family members.

And this person asked the fine folks on Reddit’s “Am I the A**hole?” page if they acted like a jerk when they made their sister-in-law pay some steep rent.

“I am 100% being petty here but curious if I am actually wrong. Most of my husbands family think I am being childish and “need to let the past go”, as my SIL can’t afford this but her behavior toward us in the past makes me feel this is warranted.

2 years ago my house burnt to the ground after being struck by lightning. Thankfully it was during the day so our 3 kids were at school and my husband and I were at work. We lost everything but we were safe. It took almost 11 months for the insurance to pay out. The insurance covered 1 month worth of hotel stays but after that we were made to fend for ourselves and the only option we had was to move in with my SIL.

She tells us we can have her spare room and her office space, since she used neither of the rooms and her stipulations was we needed to purchase all of our own food and pay her $100 a week. By week 3 all of that changed. She then decides we need to pay her $250 a week and we can only use one room.

So all 5 of us were crammed into the smallest room she had, which was the size of a glorified closet space and didn’t even fit a twin bed and a small dresser (so we lived out of trash bags and slept on the floor) for close to $1000 a month some months and still had to purchase all of our own food, despite her claiming my children on her food stamps.

She also had no bills outside of her land tax ($450 a year), electric and heating oil (which she hardly ever filled). So we were essentially paying her so she could do leisure activities. It was the worst 8 months of my life.

3 months ago my grandmother decided that she wanted to go to assisted living after a fall and transferred the deed of her house to me and basically said it was mine now. It is a 5 bedroom farmhouse. My boys insist on sharing a room so we have 2 extra bedrooms.

Well, my SIL lost her house last month due to not paying her land tax for several years and asked if her and her step daughter could stay with us until they get enough money to move down south. I said sure, 1 bedroom, $800 a month and you have to buy and cook all your food separately because my daughter is vegan.

She looked at me like I had 10 heads and said that she and her step daughter should not be made to share a room when there are 2 extra rooms and stated she cannot afford a rent of $800 while purchasing all of her own food on top of it. I said “neither could we but we managed to cram 5 people in to a glorified closet space while you were getting $1000 and food stamps. Take it or leave it.” She decided to leave.

Again, I am being told I am childish. AITA?”

This reader said they are NTA at all. 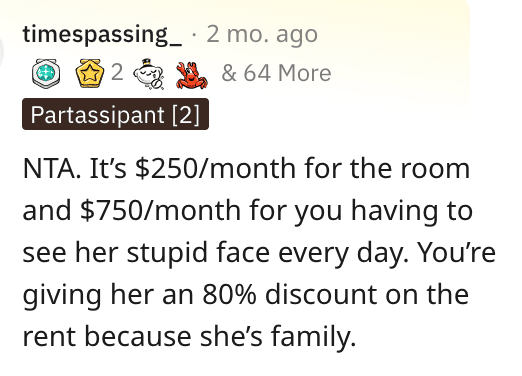 And another reader said if it was them, they’d report her for fraud. 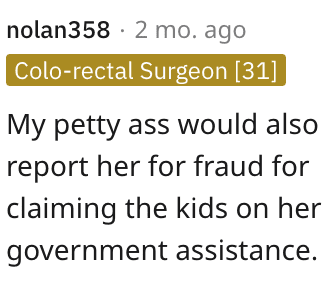 Another individual agreed they are NTA and that the sister-in-law has a simple choice to make. 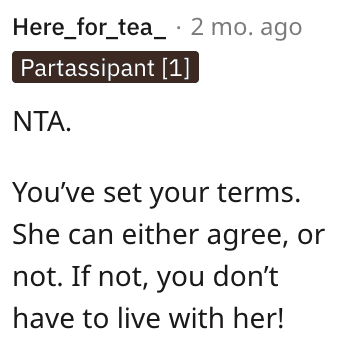