Is This Guy a Jerk for Kicking His Best Man Out of His Wedding? People Responded.

You know if you kick your best man out of your wedding, something REALLY must have ticked you off.

But we don’t know the whole story yet…so read on to see what happened and if this guy acted like an a**hole.

First, details. May is a huge anime and gamer nerd. Like, huge. We’re all gamers, but she has like every system under the sun and loves playing video games, including the retro ones like Tetris and Sonic. She’s also into MMORPG like FFXIV and JRPGs like the Tales of Series and games like My Time at Portia and Animal Crossing.

May and Andre have always gotten along, but they never actually hung out near video games together. I had him and two of our other friends over for a couple beers and cigars. Andre heard May turn on her Switch, and he asked if she had Super Smash Bros. She said yes, and Andre said, “Let me show you a thing or two” in a joking manner. I warned Andre that he was going to get thrashed, to which he made the comment, “Girl gamers don’t scare me.” No, May did not hear him.

Well, May suited up with Yoshi, and she annihilated all of them without trying. They asked her to change characters. She went to Young Link then Peach then Jiggly Puff then Roy and lastly, her favorite character, Ness. Creamed all of them.

Now, I’ll admit, my friends have short tempers with gaming. I could see they were frustrated, so I proposed we do something else. Everyone except Andre was done with the games. He proposed they play Tetris (free on the Switch and already downloaded).

And, once again, Andre lost. Hard. Like, extra hard. Painfully hard. To put it short, he got completely thrashed. May won 1st place in 2 player every game. Andre stopped playing and they all went home afterwards, annoyed. I don’t think May noticed.

Later on, Andre and my friends invited May to a game of Rainbow Six. May gladly accepted and chose her favorite, Frost. They played the private party matches and she basically was always the last one standing. May told the guys she was going to take a bathroom break and put her headset down.

I asked May if I could play the next round. She agreed and I put on her headset only to hear my friends talking trash about her. They were saying things like “why are girls such try hards” and “she’s good at gaming but I bet she couldn’t make a sandwich”.

Now, they didn’t know I was there so I spoke and told them to shut up. Andre laughed and said they were ‘just joking’ and I said that’s not funny and what if May came back and heard them? He said it’s just ‘gamer talk’ and I said it wasn’t. Andre told me I was being an a** and dragging down the group. He also told me they wouldn’t be talking smack if I told May to stop trying so hard. Long story short, after an argument, I kicked Andre out of the wedding.

I turned the PS4 off. When May asked why it was off, I said the others got off, but I didn’t tell her what they said. Our friends were saying I was overreacting and they didn’t mean it, but I honestly don’t care. It just made me so mad.

AITA? Did I overreact?”

This reader said that this was nothing more than misogynistic behavior. 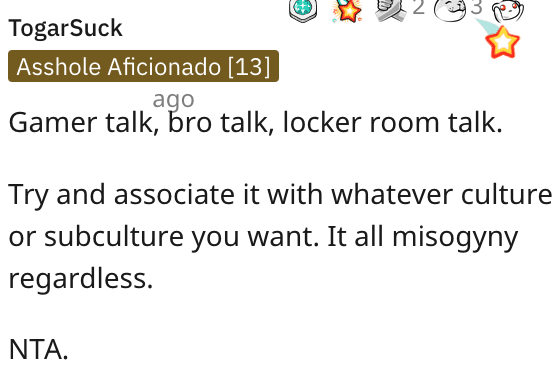 And another Reddit user said this guy is NTA and that he did the right thing by standing up for her. 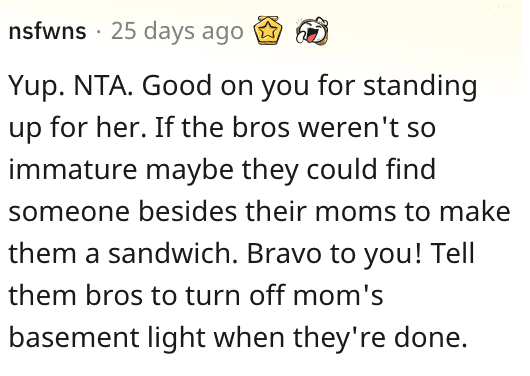 This individual agreed and couldn’t believe how guys of this age were acting like this. 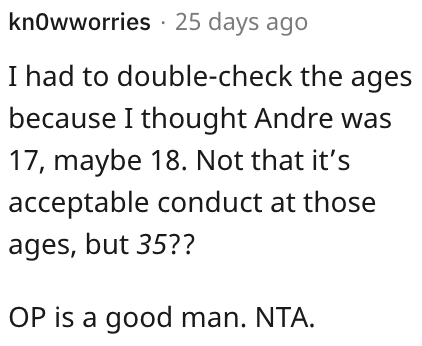