Is This Guy A Jerk For Excluding A Friend’s Partner From Dungeons and Dragons Night?

Even if you’re not someone who plays Dungeons & Dragons (D&D) regularly, you probably know enough about the game and the tight knit circles of people who play it to form an opinion on game night invites, right?

I’m going to say that since most of us watched at least a few episodes of The Big Bang Theory, we’re qualified enough.

This guy hosts a regular D&D night at his home with a group of regulars. Recently, one of the players began dating someone and asked whether or not she could come and watch (she wasn’t interested in playing).

For the last three months I (M34) have been hosting our DnD games in my flat.

Everything was fine, until one of the players wanted to bring his (M33) girlfriend (F30) along.

Which in itself was not a big problem, so we all agreed that she could watch (she did not want to play herself, as she was, in her own words, too inexperienced).

He agreed without thinking much about it, and even dismissed her bored and slightly annoying behavior the night of the game, because you know. It’s just not for everyone.

During the session she came across as very bored and constantly made loud sighing noises to, I guess, express her boredom, which was disruptive and, tbh, childish imo.

She also had a very rude attitude in general and complained about the choice of snacks and drinks.

After the game night, though, she posted on their group Discord about his house being dirty and his partner being “a creep.”

What really annoyed me came after the session, however.

Two days ago I logged into Discord and went to our group’s video game channel, just to discover that the girlfriend was talking shit behind my back, calling my place a ‘dirt hole’ and me a ‘psycho’, as well as my husband a ‘creep’.

She probably did not realize that I was in the channel because I use a different name on Discord.

OP explained that he makes paper flowers as a side business so there is often clutter around, but his house is not dirty, and that she had no reason to call his husband a creep.

I guess I have to explain here.

I make paper flowers for weddings and funerals as a side job, so my flat sometimes is a bit untidy, but never unclean or dirty.

She apparently found it creepy that a ‘grown man’ had dozens of paper flowers lying around (mind you, I put them all on my work desk, to make the place more comfortable for visitors).

My husband came home in the evening and startled her when he entered the living room.

While I can’t say for sure why she called him a creep, it is either because there is an age gap between me and him of seven years or because he has a disfigured face due to an accident.

When the players wanted to schedule another game, the same friend asked again whether or not his girlfriend could come.

For reasons that are probably pretty obvious, OP said no.

I was angry and when the players asked when the next session would be, I told them the date and also that the girlfriend was ‘invited not to come, since she felt so uncomfortable in my dirt hole of a place’ (by now everyone else had also seen what she wrote).

That pissed her off and her boyfriend as well, who even said, that I ‘should send my husband away too, if we didn’t allow spouses to come along anymore’, to which I called him an entitled prick and plainly stated, that I would no longer host the sessions anymore, as long as he wanted to bring her along.

This caused a rift in the group, so OP is wondering if taking a stand is worth breaking up his long-standing group or not.

The group now is torn into two camps, those who agree with me and those who ‘want to skip the drama’ and just want to continue playing, with or without her.

So AITA for pretty much making it impossible for our group to continue the game because I don’t want the girlfriend in my flat anymore?

Where does Reddit come down on this one? Let’s find out!

The top comment points out the obvious, which is that when someone insults your spouse and your home, they’re generally not invited back. 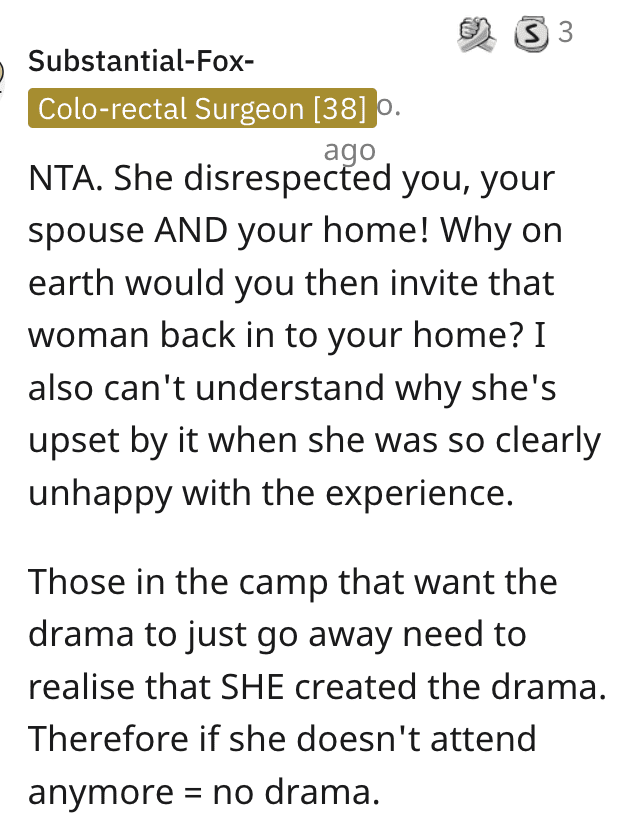 Not only is OP not wrong, they think the player who brought the girlfriend – and wants to bring her again – should not be invited back, either. 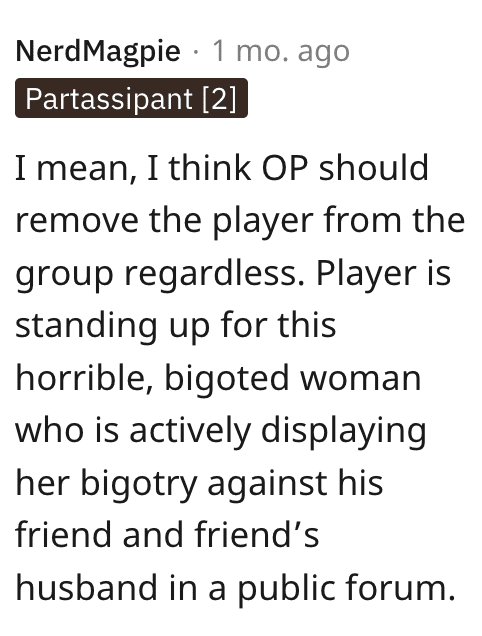 It doesn’t seem as if their relationship is a healthy one, but that’s not OP’s problem. 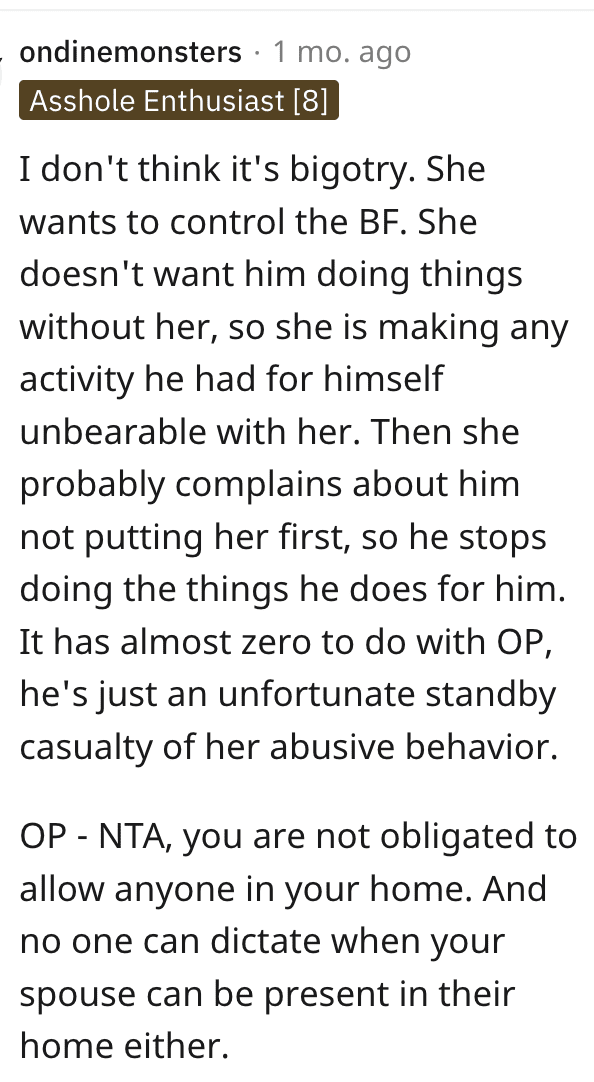 There is just so much wrong with this woman’s behavior, and no one would blame OP for not inviting her back. 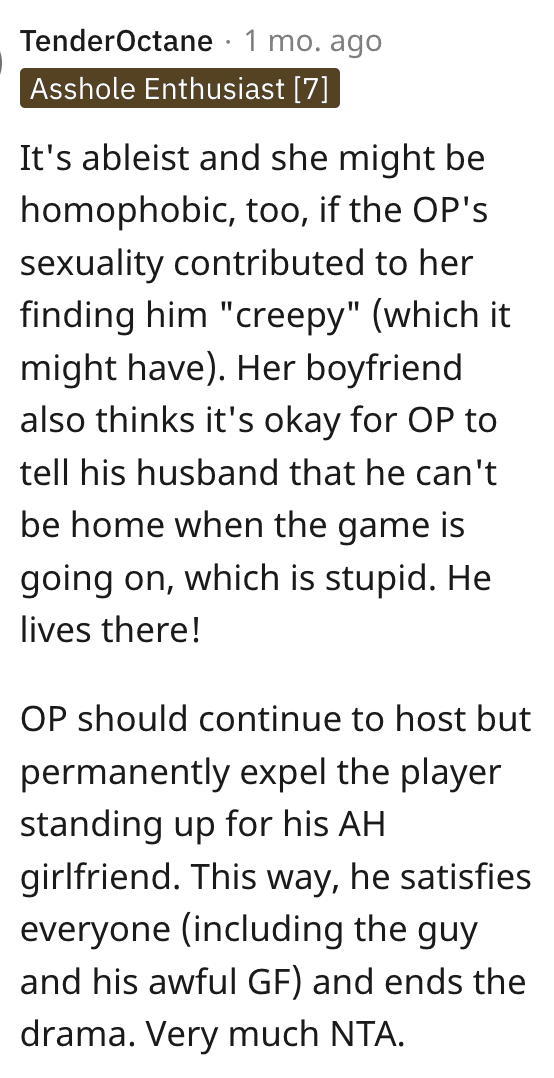 We’re all wondering why she even wants to come back, anyway? 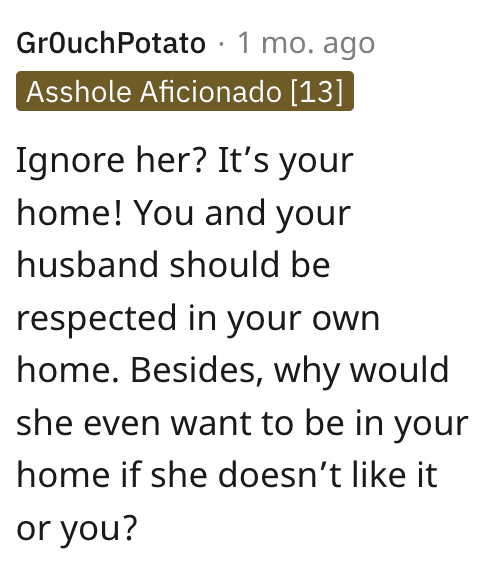 This woman needs some lessons manners and also not being rude to strangers.

I’m not sure how anyone could see this in a different way, but if you do, we’ll try to have an open mind in the comments!